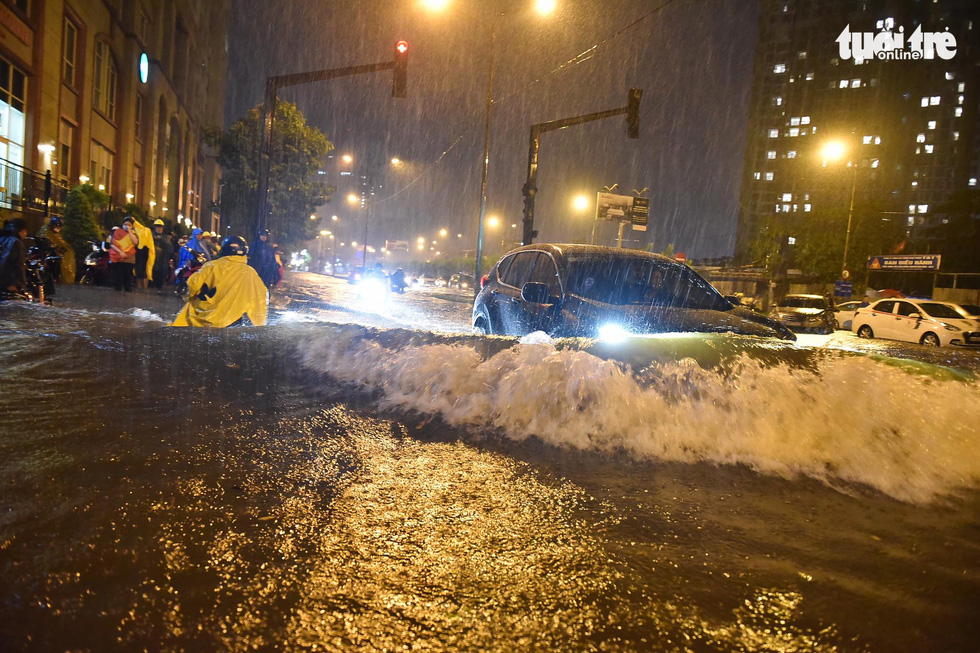 And now for something completely different: the weather.

By the time you’re reading this, the second storm of the year has passed through Vietnam. With plenty more to come, it is time to throw out the dilapidated umbrella, buy a new raincoat, and harass the landlord to do something about that pesky ceiling leak in the hallway.

I think it’s kind of weird when Ho Chi Minh City was up to the waist in floodwaters yet little old Hoi An continues its blue-sky heaven. Or that the north gets pounded by seriously stormy weather even though it is pretty much still the middle of the year weather-wise.

Unlike many expats or tourists, I’m quite comfortable with the heat as I grew up in Queensland and lived in Malaysia as a kid. I can still remember getting dropped off at the bottom of the hill in Kuala Lumpur in the early afternoons, watching the clouds piling up endlessly high. I trudged home, covered in sweat, while witnessing Mother Natures’ spectacle until the sky got dark enough to burst into crackling cascades of thunder and heavy rain drops belted down around me just as I raced home.

There’s nothing wrong with a giant noisy storm provided you are under cover and have enough snacks and drinks to watch it play itself out.

Mind you, the weather is hard to pick when it doesn’t appear that obvious and imminent that something is going to happen. In my early years of living in Vietnam, I used to get a little bit alarmed when ponderous, massive clouds turned daytime into deep shadows in minutes while riding my motorbike, threatening to burst open before I could get anywhere inside.

These days we (I and the locals) don’t react until the rain actually starts to become bothersome as the race to pull the raincoat out of the messy innards of the seat gets interesting. The other possible miscalculation can come from observing a large storm in the distance, imagining it will hit anytime soon yet simply heads somewhere else.

Moods get complicated, too. Would you prefer it to rain while practicing social distancing or can you stand the fact that sunshine is beckoning you to the now banned beach? To me, it depends on the time of day. Sunset, when it’s slightly cooler and breezier, does feel more frustrating than noon. Even going around town in the evening with a small breeze does wonders for me. Yet with much of Hoi An closed to dine-in pleasures, I’ll have to settle for my small courtyard and some home delivery while my two dogs stare relentlessly at me – at least at home I get to choose the music.

Starting from about this time, expats on social media will begin the ‘Is it raining yet?’ speculations. There was only one expat whose predictions I trusted and he’s gone now – so I’m back to using my trusty elbow extra-sensory powers and sticking my thumb out the window. It might also be a handy moment to dispense with the bloatware on your phone and update the weather app. Come to think of it, how come no one ever looks up anymore to check the weather?

Naturally everyone has an opinion, ‘raining tomorrow for sure’ – nothing happens, ‘Ugh…it’s this damn app I’m using!’ It’s nice that everyone is so helpful and full of technical weather terminology but I’ll stick to looking up.

Somewhere in the next months, it will be Hoi An’s turn to cop the floods and days of waiting for our clothes to dry in humidity. It’s amazing how used to it I’ve become. Riding with my feet planted up near the handle bars in knee-deep water is sort of fun and immaturely makes me pleased with myself at sixty-two for still being able to lift my feet in a spritely fashion. And boasting to drenched, bedraggled tourists stumbling into a café from a sudden downpour, ‘Hah! This is nothing! Wait until November!’ does have a certain perverse satisfaction.

In spite of Vietnam’s many forms of weather, the heat, humidity, damp, and surprisingly chilliness of December, I wouldn’t really want to live anywhere else. There’s the ‘Goldilocks’ factor at work here. It’s not too cold, the summer is long, the winter is short, the rain is mostly warm, I’m not in a flood-prone area, and I haven’t worn anything heavier than a hoodie for the last fourteen years.

Come rain or shine, stay strong and safe. Remember to save for a rainy day, try not to have your head in the clouds, and don’t feel under the weather if it’s raining cats and dogs. And no matter what happens around you, it’s just a storm in a teacup anyway!