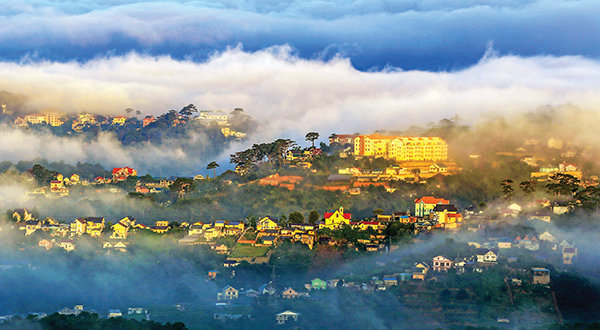 Head for the hills in Vietnam’s Da Lat

The hills in the Central Highlands of Vietnam are beckoning, most notably Da Lat, ‘The City of Eternal Spring,’ one of the great gems in this world.

The city is still a small blip on the global travel radar, and although many wish it would stay that way, it grows in popularity each year.

Da Lat (the Vietnamese language uses two words, while in foreign languages it’s usually combined into one word – ‘Dalat’) definitely lives up to its ‘Eternal Spring’ moniker, except for the odd overnight drop in temperature to below 10 degrees Celsius (50 degrees Fahrenheit) in the dead of ‘winter,’ and occasional hot spells in summer when it hits 30 degrees (87 Fahrenheit).

I’ve never seen an air conditioner in Da Lat, though there must be some in fancier hotels and offices, with space heaters being a bit more common. That’s how consistently mild the weather is.

The 100-kilometer (62-mile) distance from the coast is a big advantage, inasmuch as storms during the monsoon season from July to November fizzle before arriving inland at a higher elevation in Da Lat. Those wet months bring frequent rains, often many short showers in a day, but nothing dramatic like the deluges that flood and paralyze other locales in Southeast Asia for days on end.

How breathtaking the approach to Da Lat is by airplane from the coast if you’re lucky enough to hit a day with an easterly wind!

The plateau upon which the city is built rises dramatically from less than 1,000 meters (3,300 feet) to 1,500 meters (5,000 feet), so the city appears surreal, with the only thing missing being a castle as in the fairy tales.

The city is also referred to as the ‘City of Thousands of Pines”’ (head out of the city proper and you’ll be surrounded), the ‘City of Love’ (no shortage of smitten couples cuddling up on a romantic getaway), and the ‘City of Flowers’ (the prevailing overall theme).

Just last week I saw a couple posing with flowers in the middle of Hoa Binh Square in full wedding regalia, with trucks, cars, and motorbikes whizzing around them. Anything for a good shot!

Even if the city was ugly, the people nasty, food bland, and the architecture unimaginative and boxy, Da Lat would be worth a visit just to frolic in the fresh, cool air. In truth, it’s the opposite on all those points – people are mellow and welcoming, the food is off the charts delicious, and the warm look and feel to the architecture and topography are unique in this part of the world.

The hilly layout is akin to old cities found all over Europe – after all Da Lat was founded and built by French colonialists just over 100 years ago who clearly knew what they were looking for: a cool weather high-altitude retreat from the searing heat of Ho Chi Minh City, known during those times as Saigon.

Da Lat is also referred to as ‘Le Petit Paris’ (‘The Small Paris’ in French), a bit of a misnomer – given all the hills it more closely resembles some cities in the south of France than it does Paris, which is quite level for the most part.  There is a tower similar in design to the Parisian landmark ‘La Tour Eiffel’ (Eiffel Tower) but much lower in height, as well as a neighborhood labeled the ‘French Quarter’ with French-style villas, but neither are must-sees.

Colonial-style buildings cling to the hills, giving the city its identity and charm. Small lanes and cobblestone alleys are lined with stone walls exuding an aura of mystery, romance, and intrigue, like a scene out of an old movie or novel. Level streets can be hard to find, so when you come across one, take a moment to catch your breath and enjoy the ambience.

If you took down the signs in Vietnamese and replaced them with others in a European language, you’d never even know you were in Asia, that’s how distinct the European vibe is. There are some cities in the region that retain a colonial feel, but none hold a candle to Da Lat when it comes to charm.

That look and feel make Da Lat a huge hit with Vietnamese tourists, which made up over 80 percent of the over six million visitors in 2019.

Those tourist numbers are going to keep growing, probably in direct proportion to how hot and stuffy the major cities in Vietnam and Southeast Asia become each year, so there is much talk of wear and tear on the city’s infrastructure, especially the increasingly clogged roads.

Authorities forecast there is enough land in the vicinity to allow the city to double in size going forward, as well as sufficient natural resources to support a larger population. Initiatives to modernize the city center are well into the planning stage so that traffic flow will be improved and congestion reduced in key areas.

With a population closing in on 400,000, and given its 300-kilometer (200-mile) distance from Ho Chi Minh City, Da Lat is both small enough and far enough from the hubbub of the megacity to retain its provincial charm. The city is the capital of Lam Dong Province, and therefore the regional commercial, cultural, and political hub.

There is a small expatriate population of several hundred, most of whom live outside the city center and lead low-profile lives. Most visitors tend to gravitate to the coastal areas leaving Da Lat low-keyed and peaceful.

Property values in recent years have skyrocketed, making Da Lat among the most expensive real estate markets worldwide. Well-heeled residents of Ho Chi Minh City, the capital Hanoi, and other major cities in Vietnam and Southeast Asia are the most aggressive buyers, eager to trade the woes of urban living for fresh air and space.

The city has moved onto the international scene during the last two years with flights from Bangkok, Kuala Lumpur, Seoul, and Lanzhou (People’s Republic of China) added, with Singapore and destinations in Laos and Cambodia on the horizon. We’ll have to wait and see which routes are viable when some semblance of normality returns and borders reopen to tourists.

Visitors also arrive by bus, car, and even motorbike in droves, pop into the market, buy a hoodie and maybe a French-style beret, and they’re all set!  They might as well be in France – so, for many Vietnamese, it’s a great opportunity that they may not otherwise get to experience European culture.

Businesses are mostly family-owned and operated in Da Lat, featuring local food and products – refreshing compared with the increasing number of destinations worldwide that cater to the international tourist trade, bringing their mass-produced goods and services along with the crowds.

A large chunk of the populace was born and raised here so they own their homes, passed down through the generations. Several of my friends nearing retirement age still live in the houses they were born in, so deep are the roots in the community.

The usual urban-style rat race is noticeably absent, leaving plenty of quality time dedicated to a slow living pace. Many residents have small businesses and part-time gigs because the pressure to earn big is off so all they need to do is earn enough to put food on the table and save for a rainy day.