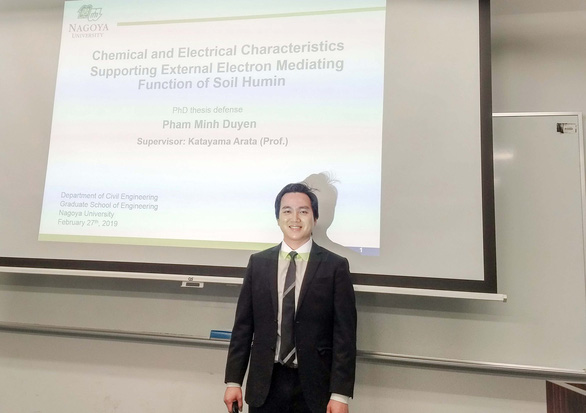 Pham Minh Duyen is the epitome of “hard work pays off.”  From his small cottage in Vietnam, Duyen has managed to successfully fill his résumé with an impressive slew of academic achievements, including a PhD from a highly acclaimed overseas institution.

Duyen’s academic journey began in 2008 when he was awarded with a college scholarship by Tuoi Tre (Youth) newspaper.  He has spent the decade since earning his doctoral degree from a Japanese University.

The Tuoi Tre journalist who wrote about him 2008 was among the first with whom he shared the news that, after a decade of studying, he had earned his PhD on February 27.

Duyen is no stranger to poverty.  His upbringing was humble, to say the least.

He grew up in a small bamboo cottage in District 9, on the outskirts of Ho Chi Minh City.  His mother was a housekeeper who moonlighted as drink seller and his father worked as a bricklayer in the neighboring province of Dong Nai, heading to work each morning before dawn and returning home long after dusk.

The family’s cottage offered little protection against southern Vietnam’s unforgiving rainy season and their ‘kitchen,’ an open space set up outside the ‘house’ spent half the year inundated with flood water, forcing the family to eat undercooked rice more often than not.

But Duyen never let hardship serve as an excuse to abandon his pursuit of knowledge.

At night, he would study under the stars, doing his best to not disturb his parents as he used candlelight to illuminate his books from his perch outside the cottage.

“I struggled to concentrate on the lessons while battling hordes of mosquitoes,” Duyen recalled. “I only studied inside when it rained.”

But all those hardships paid off.

Unfortunately, his family could afford neither.

It was only because of a Tuoi Tre-funded scholarship meant for needy to students to attend college that Duyen was able to follow his academic dreams.

From the pond into the sea

Duyen admits that studying might be his greatest pleasure in life

In 2013, he received a Master’s scholarship from the Royalty of Thailand for his outstanding performance while earning his undergraduate degree in Water and Wastewater Engineering at the Asian Institute of Technology.

Duyen finished his coursework with honors and went on to earn a PhD scholarship from the Japanese Nagoya University to study Natural Biomaterials.

His doctoral thesis, “Chemical and electrical characteristics supporting external electron mediating function of soil humin” was well-received and described as having “high practicability.”

According to Professor Katayama Arata, Duyen’s doctoral dissertation is very crucial in its scientific context despite the immense amount of difficulty it took to research due to the various fields the subject incorporates.

“I am very delighted to have him in my lab. I wholly believe he will become a well-acclaimed scientist in the future,” Prof. Katayama Arata said.

For Duyen, all of his achievements are in honor of his parents’ desire and hope for their son.

Every time he thinks about how hard it was for them to raise him, Duyen presses on so that their efforts will not have been in vain.

He now plans to continue his postdoctoral studies at a lab in Japan so that he can pursue some of his unfinished research works.

He’s also set his sights on working in Western, English-speaking countries in order to expand his pool of knowledge and enhance his English skills.

“I truly yearn to help to impoverished youths like I once was, but I’m aware that in order to do that I must first become a giant.  I’m still in the process of refining myself by the day,” Duyen said.

According to Vo Le Phu, dean of the Faculty of Environment and Natural Resources at Ho Chi Minh City University of Technology, Duyen served as a bright example to his peers during his undergraduate years.

Aside from his innate hardworking nature, Duyen excelled in almost every course.  Phu definitely was not surprised by each scholarship Duyen earned.

“I could sense right away the he was attuned to writing theses because of his exceptional observation skills,” Phu said in an interview.

“Even when he went abroad, he still kept in touch with the faculty’s instructors, to exchange academic information with us – a truly bright example to all, I must say.”

There will be 15,000 vaccination stations