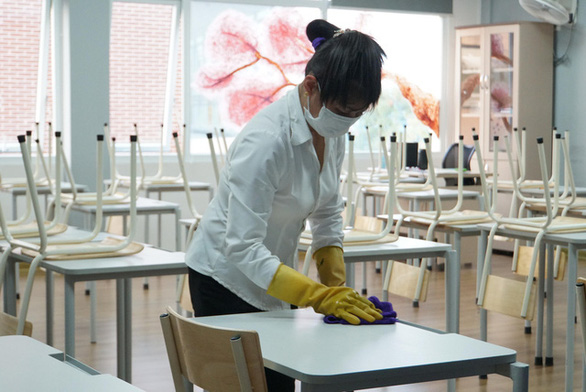 Hanoi closes schools for another week due to COVID-19

K-12 students in Hanoi’s public schools will not resume study until after March 8, chairman of the municipal People’s Committee Nguyen Duc Chung has said.

Chung made the announcement at a city-level meeting on the prevention of the new coronavirus disease (COVID-19) in the Vietnamese capital city on Friday.

At the meeting, the chairman affirmed that Hanoi has so far reported no case of COVID-19 infection.

“Our goal is to avoid human-to-human transmission of the coronavirus in the city, but we still have different scenarios to prepare for the worst,” he said.

The chairman asked authorities in the city’s districts to prepare hygiene equipment and complete disinfection work for the sixth time before high school students come back to class on March 9.

Exceptionally, international schools in the city are allowed to reopen on March 2 as they have confirmed their classrooms are safe and parents agree for their children to attend classes, the chairman added.

“Since international schools’ semester dates are closely related to those in foreign countries, we have allowed them to resume all activities from March 2,” he said.

Two hundred and eighty-four vocational training institutions under the city and related ministries’ management will also welcome their students back next Monday.

Meanwhile, authorities in Ho Chi Minh City have yet to announce a decision on when schools could open again as of Saturday morning.

The southern metropolis resorted to votes from students’ parents to decide on the back-to-school date.

In most other provinces and cities, middle and high schools will reopen on March 2, while elementary schools and kindergartens will remain closed through March 8.

The COVID-19, which first surfaced in the Chinese city of Wuhan in December 2019, has infected over 85,100 people and killed 2,924 globally as of Saturday morning, according to the South China Morning Post.

South Korea has confirmed 16 deaths from 2,931 positive cases so far, becoming the biggest cluster of infections outside China.

To date, Vietnam has reported 16 cases of the viral infection, including 13 Vietnamese, one Vietnamese American, and two Chinese.

All of them have fully recovered and been discharged from the hospital.

Most provinces and cities in Vietnam previously decided to let students stay home until the end of February to prevent the viral infection.

back to school COVID-19