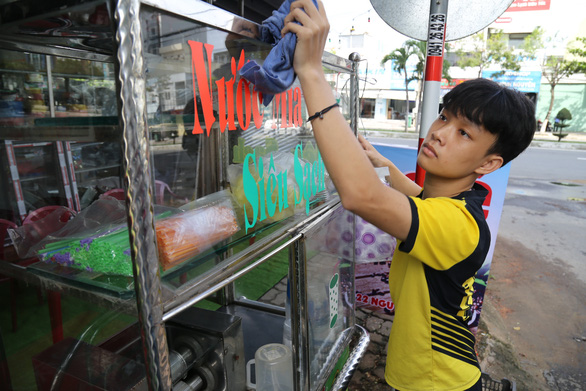 Rather than letting his financial difficulties get in the way of his studies, Tran Doan Dinh Phap is pushing steadily towards his dream of becoming a doctor.

Despite his ongoing struggles, Phap, a freshman at Da Nang University of Medical Technology and Pharmacy located in its namesake central city, would go to any lengths to realize his dream of becoming a capable doctor.

The 18-year-old is the eldest and a beacon of hope for his family of three siblings from an underprivileged neighborhood in Phu Ninh District, Quang Nam Province, approximately 70 kilometers from Da Nang City.

Life took an unexpected turn for his farming family in 2012 as his father was struck dead by lightning while he was working on the field.

The sudden passing of Phap’s father, the breadwinner, when he was only nine and the deteriorating health of his paternal grandmother left his family in a deep financial hole and emotionally devastated.

His mother pushed extremely hard to put food on the table and pay his grandmother’s medical bills for severe heart disease.

As his mother’s income could only cover daily needs, when he was not in class, Phap would help her with farm work.

The grieving woman and her young son toiling on the farm was a common sight, according to Phap’s neighbors.

There were days when the boy got laughed at by his classmates for his mud-smeared legs as he barely had time to get changed and take a shower.

After finishing ninth grade, Phap once thought of discontinuing his studies so he could find work to support his family.

Alone in his struggle, he realized he was almost at a dead-end and did not know anyone to turn to for help.

Help came just when it was needed most as Phap found himself a beneficiary of a Da Nang-based charity center which offered to cover three years of tuition for underprivileged, well-performing students.

The teenager had his first taste of independence when he moved to Da Nang to attend senior high school, where he continued to excel in his studies.

His perseverance and determination and the support he received have helped him through the difficult times.

Instead of missing years of learning, the young man finally made it to medical college last September and is taking his first steps towards his dream and a brighter future.

Nhung, Phap’s mother, was exhilarated with the good news of her son’s college enrollment, but the joy was short-lived.

She was weighed down with worries that she would be too poor to support her son’s university education.

As she only has a few beds of vegetables to rely on for income, she would struggle to finance her son’s studies, with tuition fees approximating VND15 million (US$656) a year, as well as boarding.

“I tossed and turned the nights [following his enrollment]. I can hardly cover our daily needs,” Nhung shared.

Refusing to let financial difficulties stand in the way of realizing his dream, Phap never ceased to work to make the impossible possible.

His first step was spending most of his days helping at a plumbing tool store owned by one of his relatives in Da Nang.

Phap also helps at a beverage stall nearby.

With his payment being free meals and boarding, the aspiring young man can save up and focus on his studies.

The relative is very kind to him, so he does not miss out on online classes, which have been in full swing in many localities in Vietnam since early May to curb the spread of the COVID-19 pandemic.

Every night, inside a mezzanine, which triples as his relative's warehouse, kitchen, and rest space, the student diligently does his studies by lamp light, which keeps his dream ablaze and his future as bright as possible.

Phap shared his childhood dream of becoming a doctor is something very important and personal.

With all the financial distress, physical pain and emotional loss his family has been through, the young man is determined to pursue his dream to the very end.

“I always keep in mind what my mom told me, I have to put in double or triple the efforts compared to others,” Phap shared.

“Where there is darkness, there is light. Only by excelling academically can I become who I aspire to be.”

This year’s scholarship handout is part of Tuoi Tre’s ‘Vi ngay mai phat trien’ (For the growth of next generations) program.

The scholarships have a total value of more than VND300 million (US$13,125), with donations coming from Quang Nam-Da Nang Tiep suc den truong Club.

Other donors include Nestle Vietnam, which hands out gifts to the beneficiaries, and Vincam Co.’s Vincam Study Encouragement Foundation, which gifts laptops to particularly disadvantaged students who need devices for their studies.

Students back to school in Ho Chi Minh City

The city is expected to have more than 1.3 million students for the 2022-23 school year