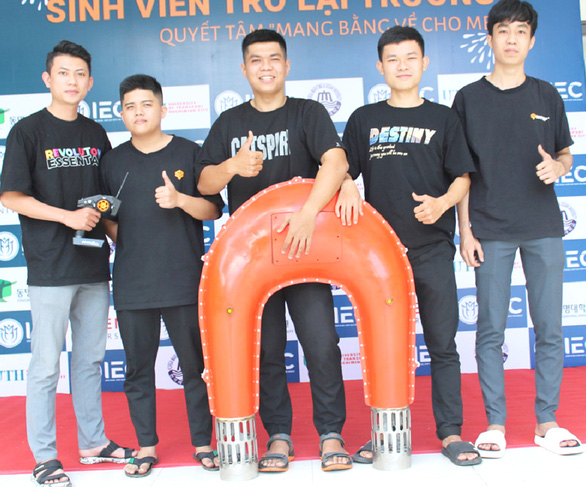 A team of six students from the Ho Chi Minh City University of Transport has just unveiled a model of a remote-controlled life preserver, the first of its kind from Vietnam.

hey are all students of the university’s Faculty of Marine Engineering.

Among the six team members, three are from the south-central province of Phu Yen, which is hit by floods every year.

They have even personally seen some people in need during the floods without being able to help.

Nguyen said he read and found it really heartbreaking that thousands of children drown every year in Vietnam.

Before participating in the project to make the remote-controlled life preserver, each of them had their own projects related to marine engineering.

Prof. Dr. Vu Ngoc Bich, the professor responsible for leading the team, knew that his students had already conducted research on floating submarines and diving robots.

When Dr. Bich met with them, he suggested they design something more practical and useful, such as a life preserver.

The teacher's suggestion sparked the creative ideas of the young men, as some of them had thought about it before.

The team spent a lot of time reading scientific papers. Although remote-controlled life preservers have been manufactured for many years, there are none made in Vietnam.

Given what others had done with this device so far, the team designed a motorized life preserver model that can be controlled remotely.

While they are learning in District 12, the lab where they can do the project is located in Binh Thanh District, about a dozen kilometers apart, they can just spend time together after school to work on it. Fortunately, they are actively supported by their university.

Nguyen Huy Minh, the teacher in charge of the Aerodynamics Laboratory of the Institute of Mechanical Engineering under the Ho Chi Minh City University of Transport, has helped the team to be able to do research in the lab on weekends.

"As young men, we are excited about the projec," Giang said.

"We challenged each other to finish the prototype and did our best around the clock.

"Finally, our very first model of the life preserver was unveiled after only six days, even though it was a simple version."

Hoping to save lives

The life preserver is U-shaped and has a composite body. It has a slightly pointed head, making it easier to move, especially in strong flowing tides, according to the team's explanation.

The device is equipped with two battery-powered motors and is pushed by two propellers.

The operator can remotely control the life preserver from shore via a piece of equipment installed in its ‘nose.'

According to Son, who tested the life preserver in a real-life lake environment and in the Saigon River, the device's battery life is about 37 minutes.

With a length of 1.1 meters and a width of 0.8 meters, the total weight of the life preserver is about 15 kilograms. It can move at a speed of 15 kilometers per hour.

Test results showed that within the device's potential wireless range of about 500 meters, three people in danger can be lifted at the same time.

The students know that a rescue team in one province has imported a remote-controlled life preserver at a cost of more than a hundred million Vietnamese dong. (US$1 = VND23,000)

Their device could cut the price in half and even be cheaper in mass production, according to their calculations.

At an innovation competition for students last year, the team took second place with their remote-controlled life preserver model.

It was the first time they had brought the device to a contest, which is why the award inspires the members so much.

"We expect that our product could be used soon," Nguyen said.

"Then we would have another useful device for rescuing victims in distress.

"The life preserver could be particularly necessary for hard-to-reach areas.

"If it can help reduce drowning deaths, we consider it a success."

Currently, the students are looking at potential solutions to reduce the overall weight of the device in the fourth version.

This includes shrinking the case from four layers in the first version to two layers while ensuring safety.

Son said the team is trying to make the equipment lighter, faster, and with longer battery life while improving the remotely operated life preserver in the current version.

Prof. Bich said the project to make the life preserver is part of a larger scientific project he is leading at the ministry level.

It is the first model to be researched in Vietnam.

"There are several problems that need to be solved before mass production," he explained.

"One of the most important factors is optimizing the weight of the life preserver.

"The group is even thinking about using different materials to achieve this goal."