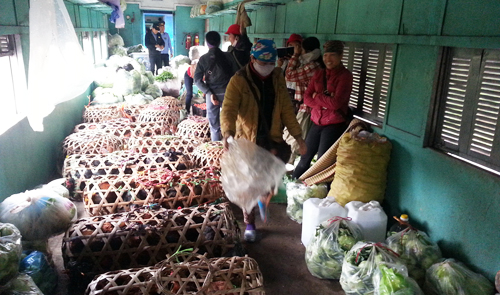 Market trains the only income source for many rural localities

Market trains have acted as the only mode of transportation and the only source of income for residents of many remote villages in Vietnam, especially in the mountainous localities of the central and northern regions.

Market trains have never been mentioned in official documents but are widely used by locals in the localities the trains pass through.

In colloquial Vietnamese, 'market' is translated as 'chợ', meaning 'cheap'.

The trains carry passengers and goods that are sold to residents of villages along the railway line, who then sell the products at their local markets.

The last carriage of a market train looks like a small market: vegetables and other food are displayed on the floor to prepare for delivery upon arrival at stops along the route.

Ms. Le Thi Hoa, the owner of the baskets of fish, told Tuoi Tre, “These fish will be distributed in small numbers at each stop along the railway route. 200kg of fish is delivered on the one way train.”

At the other corner of the carriage, Ms. Ninh Thi Son arranged candy and other food in small packs to prepare for delivery at each end.

“I can only distribute goods to mountainous districts Tuyen Hoa and Minh Hoa of Quang Binh thanks to the low fares of this market train,” she added.

“Going by road doubles the distance and it certainly costs much more.”

Nguyen Thanh Binh, head of train VD32, told Tuoi Tre he knows each passenger who rides his train because they are all locals who live along his route.

“Here, people in the central provinces of Quang Binh and Ha Tinh are poor. They grow vegetables themselves. They will choose to ride the train if they have enough vegetables to make 20,000 dong,” he said.

“Most villages along this railway route are located in isolated areas in high mountains facing the long Ngan Sau river.”

“Their lives are mostly dependent on the railway route,” he confirmed.

Le Hoai Cung, Party Secretary of Lien Hoa Village in Duc Lien Commune of Ha Tinh, said people in his village have to go 15km and cross two rivers by ferry to the nearest market if the market trains cease operation.

Tan Son Village, in a remote area of Quang Binh Province, was established soon after the Dong Chuoi railway station was built 15 years ago. Before, the area was uninhabited.

But locals do not call the village by its official name; they have nicknamed it the “train waiting village.”

All of the locals’ activities such as farming, cooking, and sleeping depend on the trains, although they only stop for three minutes at the station.

All transactions, such as buying, selling, and transporting cargo, are done on the trains.

Home to only 11 residents when it was established, the “train waiting village” is now comprised of 15 families.