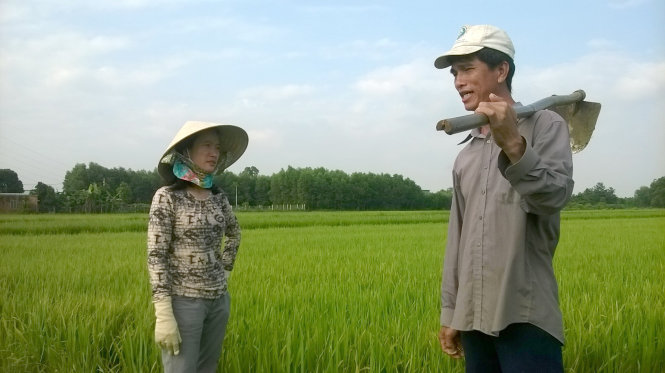 A female master’s degree holder in agriculture has worked hard to turn her long-cherished dream of producing organic rice into reality and helped farmers in her hometown successfully adopt the model.

Graduating in agriculture from a university in Ho Chi Minh City in 1997, she began working at a state-run agriculture agency under the provincial Department of Agriculture and Rural Development.

In 2008, she landed a scholarship for a master’s degree in Gyeongnam, South Korea.

Her master dissertation on preventing and curing diseases on chilies received high critical acclaim from Korean professors and media.

Chi returned to her hometown in 2011 to further her contribution to its agricultural growth.

Combining the hi-end farming technology she learned abroad and her years of experimental experience, Chi came up with a safe, environment-friendly model of growing organic rice without the use of chemicals, including pesticide and chemical fertilizers.

In late 2012, the engineer then piloted her model on several of farmers’ paddy fields in her home town and encouraged more farmers to join.

In the initial days, Chi encountered immense difficulty talking farmers into joining her project, as they have been long hardwired to use pesticide and chemical fertilizers on their paddy fields.

In September 2012, by applying Chi’s model, the farmers were expecting a bumper crop but to their dismay, the piloted fields, where insecticides were not sprayed on, were seriously plagued by pest attacks.

“The farmers were on edge then, they welcomed their Tet (traditional Lunar New Year) in February 2013 in apprehension, clinging onto hopes that I would soon find a remedy. Some were so anxious they resorted to pesticides. I was really upset then,” Chi recalled.

She promptly came up with a recipe of environment-friendly herbal pesticide.

The pest attacks stopped right the following day and were wiped out one day later, though the farmers could harvest only 4.5 tons per hectare that season, which was down one ton compared to their expectations.

However, the pests quickly turned to the lush surrounding fields, which had been sprayed with pesticide, Chi added.

She then shared her techniques with those farmers and persuaded them to join her project.

“Since adopting Chi’s model, my costs were cut considerably while my fields yield better crops. My husked rice now fetches prices some 15% higher than those grown with conventional approaches. More importantly, my family and I no longer inhale the toxic pesticide,” said Thanh Hai, a local farmer.

Around 15 households in Tan Binh Commune have now adopted Chi’s model in their fields, which span a total of dozens of hectares.

Her business has produced over 70 tons of clean rice over the past two years.

After trying the nutritious, clean rice, several locals offered to be Chi’s outlets.

Chi said she’s willing to transfer her entire model to farmers and businesses, and is currently offering training to local farmers and agriculture staff as well as those from other provinces.

The provincial agricultural department is planning to have Chi’s clean rice growing model applied throughout the province.

Doctors must care for others in the best possible way, with all of their acquired knowledge and empathy, said Prof. Thach Nguyen