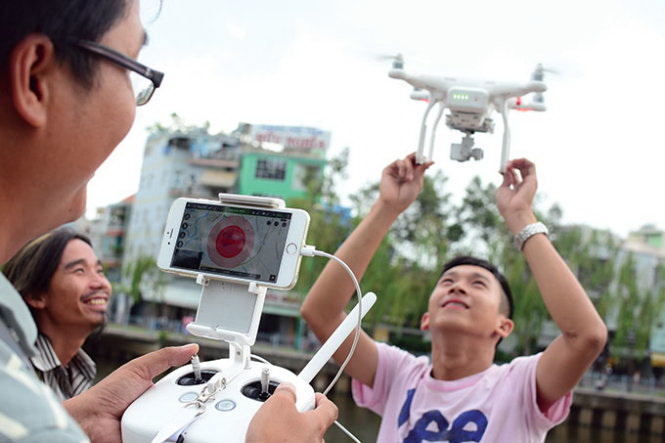 Users of camera-equipped drones in Ho Chi Minh City have been on hot bricks in recent days, as signals indicating restricted flying zones have appeared on their controllers’ screens.

That happens in the context that many photographers, filmmakers and even those working in construction find the gadgets hugely beneficial.

The Ministry of Defense said last week that individuals and organizations are now required to apply for a flying permit for any unmanned aerial vehicles, and no such devices are allowed to fly without permission from it.

Very few have such a permit now as they had had almost no knowledge of such a regulation until last week.

The defense ministry has regulated the use of flying cameras in Decree No. 36, issued as early as 2008, but most users remain largely oblivious to the regulation.

The Department of Operations under the General Staff of the Vietnam People's Army is in charge of granting permission for the use of drones, according to Decree No. 36.

The decree was amended and supplemented in 2011, and the ministry last week issued a new dispatch to remind the public of such regulations, which they are required to adhere to.

Amidst the mounting disquiet, Tuoi Tre (Youth) newspaper organized a workshop on Saturday, which gathered artists who have increasingly used camera drones to their advantage, as well as aviation experts.

The workshop was also meant to arm participants with legal knowledge regarding the use of the widget.

Nguyen Minh Tan, of the Ho Chi Minh City Association of Photographic Artists, who has maneuvered drones for five years, said he recently tried out his newly bought gadget along the banks of the Nhieu Loc-Thi Nghe Canal, which spans several districts, including District 1, Tan Binh District and Binh Thanh District.

“We have operated them with ease in the past few years, but our controllers’ screens now show red marks and notifications of zones denied to drones,” he told the Saturday workshop.

Le Xuan Thang, deputy head of the Ho Chi Minh City Photographic Association, not to be confused with the said association, told the workshop that recent photo contests have seen a notable rise in entries taken by camera drones.

The gadget’s superiority was evident in “Good Morning America,” a flagship program of the American Broadcasting Company (ABC), which in May this year featured Son Doong Cave, the world’s largest, which is secluded in the UNESCO-recognized Phong Nha-Ke Bang Park in the north-central province of Quang Binh.

The film crew used a drone to make stunning footage of the cave, wowing viewers around the world back then.

Other drone videos capturing downtown Ho Chi Minh City, a national flag pole in the northern province of Ha Giang, and elsewhere have reiterated the ‘upper hand’ of drones over conventional cameras.

According to film director Dinh Thai Thuy, many audience members told him that the striking drone shots in Phan Rang-Thap Cham City, the heart of the south-central province of Ninh Thuan, for his recent TV drama “Dau Chan Du Muc” (Nomadic Footsteps) have opened their eyes to the spectacular landscape.

“For a shot of a person tumbling from a towering waterfall, it took us two or three days and sometimes posed safety hazards using a conventional filming approach. Drones have now cut down the time to a mere two to three hours and ensured us maximal safety,” Thuy stressed.

Meanwhile, photographer Tan, who works in construction, pointed out how drones have become an asset to his field.

Constructors used to rent cranes on which a person stood, taking photos of high-rises, parks or golf courses to feed reports on the progress of building works.

However, such cranes can only attain an altitude of 40 or 50 meters at most, thus making panoramic shots and detailed reports impossible.

With camera drones becoming such a feverish trend, its enthusiasts have been dealt a devastating blow with the dispatch demanding that they seek permission from the defense ministry.

Lai Xuan Thanh, head of the Civil Aviation Authority of Vietnam, confirmed at the Saturday workshop that drone camera users in Ho Chi Minh City would be all breaking the rules if they fly the device without seeking prior permission.

Drone users joining the exchange then raised questions on whether those in Ho Chi Minh City will have to travel all the way to Hanoi to obtain permits from the Department of Operations.

Addressing such concerns, Thanh suggested the Ho Chi Minh City Photographic Association set up a club of drone buffs which will operate like an aviation club, as stipulated in Decree No. 36.

The club will then seek the permission from the Department of Operations on behalf of its members, he added.

Thang, deputy head of the association, said they will consult lawyers on the club establishment to allow its members’ drone flying dreams to soar.

As survey of 10 participants at the workshop showed that they unanimously agreed to the use of camera drones suitable for the current situation in Vietnam.

Photographer Thai Ton Hao voiced his opinion that drones are harmless as their altitude ceiling is only 250 meters.

Several photographers and filmmakers divulged they only asked for permission from leaders of the localities where they would shoot with their drones.

Some even used the drones to create a program for the police force, which then created auspicious conditions for the shoot.

Cameraman Nguyen Truong suggested policymakers should be more flexible in that a light-weight, small-sized drone is a far cry from real unmanned balloons and aircraft and thus should not need permission to fly.

Luong Hoai Nam, general director of Hai Au Aviation Co., a local company that offers helicopter services to some tourist attractions, pointed out at the workshop that Decree No. 36 came into being when the trend of using camera drones had yet to take shape, and the fiat has thus failed to keep pace with the global trend.

He added that the greatest hurdle that Vietnam is faced with is the absence of a detailed sky plan.

Such a plan would keep users or manipulators of camera drones, gliders, balloons and small-sized aircraft well informed of where their vehicles are allowed to fly and what altitudes they can reach.

Vietnam now only has plans of airports and air routes.

More importantly, planning of airports in Vietnam is simply made in a cylindrical shape, Nam underlined.

By contrast, other countries have adopted such trapezium-shaped planning, which allows users of gadgets like drones ‘niches’ to operate.

A Hanoi photographer keen on camera drones said that users in Ho Chi Minh City are at a greater disadvantage as the proximity of Tan Son Nhat International Airport to the southern hub’s heart means omnipresent restricted flying zones.

Nam added that there exist a restricted flying zone 30km in diameter around Tan Son Nhat, which many participants said basically renders all drone users in the city to be breaking the rules now.