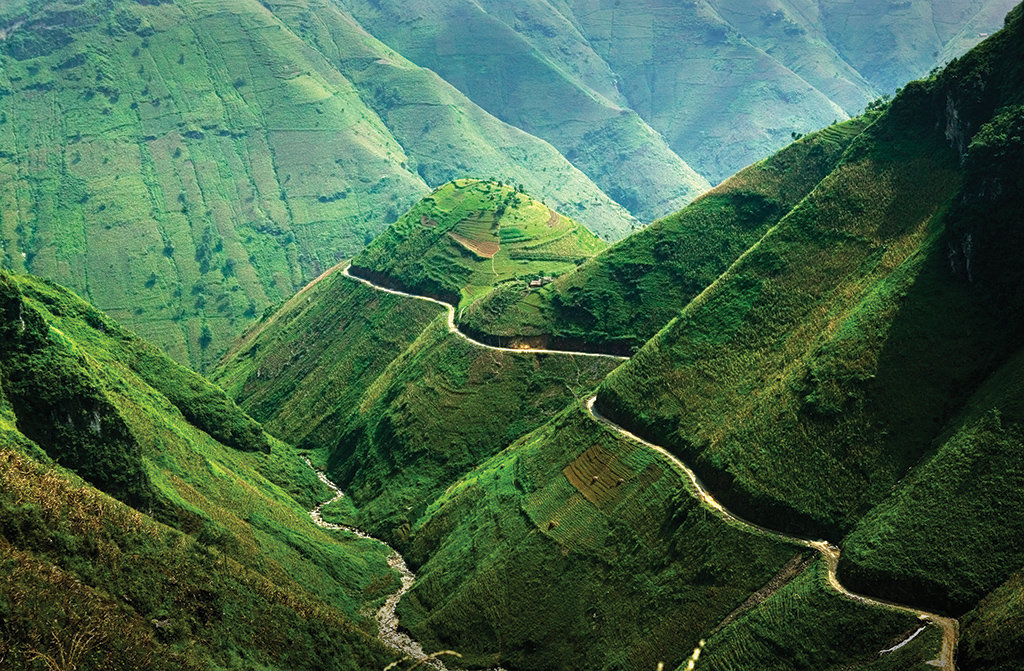 The four most resplendent passes in Vietnam’s northwestern region are typically precarious yet romantic at times.

Backpackers and hikers say that if one has yet to conquer these four mountain passageways, they are yet to acquire a full taste of the scenery available at one of the country’s furthermost locations.

It took the Tuoi Tre reporter nearly an entire day to travel from Hanoi to the beloved resort town of Sa Pa, nestled in Lao Cai Province.

The busy tourist town is approximately 376 kilometers from the capital.

O Quy Ho Pass, also known as Hoang Lien Son Pass, is the region’s most grandiose of its kind.

The journalist spent his homestay with Hoang, whose wife is of Dao Do ethnic minority.

“Some 20 years ago, no one would go through O Quy Ho Pass unless they had to. The pass was merely a narrow, rugged strip that rested treacherously on steep mountain sides,” Hoang recalled.

“Young men would scale down its abysses and scour for iron scraps from automobile wreckage following fatal accidents,” he added, sending chills along his listener’s spine.

The next morning, O Quy Ho loomed through the thick fog.

Most of the pass’s right side is a sheer precipice with rapids, while abysses are seen on its left side, giving trekkers a hair-raising experience.

Vang Thi Hoi, a surviving traditional dance troupe member, recalled that she mounted the pass several times during the early 1940s, when she was only 13, on her way to performing venues.

“We were all scared out of our wits, as the area was infested with predators and robbers by day and night,” she added.

The pass’s name “O Quy Ho” is believed to originate from a bird which is known to be a manifestation of wandering spirits in the area.

Backpackers believe they can experience all four seasons in different sections of the pass.

The pure forest streams in O Quy Ho have been particularly nourishing for local sturgeon and salmon farms.

An engineer confirmed that the area provides the best conditions for the fish to thrive, adding to the locality’s economic growth and tourist appeal.

A view of the picturesque Lai Chau Lake on the way from Khau Pha to Pha Din Pass. Photo: Tuoi Tre

On the fourth day of his trip, the Tuoi Tre reporter took on Khau Pha, a famous 30-kilometer pass snaking itself through National Highway 32, which links Mu Cang Chai and Van Chan District in the northeastern province of Yen Bai.

As daylight ran out, he could not conquer the pass but bided his time by staying at a village in the valley beneath, located in Tu Le Commune.

There he was treated to the locale’s glutinous rice specialty, which is made from rice harvested from terrace fields which are irrigated by pure babbling streams descending from Khau Pha Mountain.

“Local girls used to feel at ease when they were being photographed by tourists. However, they have been upset in recent times by vulgar comments on social networks regarding their long-standing practice of taking baths naked in streams,” Hoang Van Soan, deputy head of the Tu Le Commune People’s Committee, said.

“The practice is thus on the verge of dying out,” he added.

Unlike the uninhabited O Quy Ho Pass, Khau Pha Pass is dotted with cottages nestled under the lush foliage and a school with children frolicking about.

After a while, Sung Troi, or how Thai ethnic people interpret the name “Khau Pha,” appeared magnificently at a height of approximately 1,500 meters.

Locals often ascend the peak, where they traditionally yell out their suppressed sufferings to seek an outlet and solutions from deities.

Also on the pinnacle is a memorial monument to Vietnamese guerillas who perished during the Resistance War Against French Colonialists, which came to an end in 1954.

The soldiers, who came from nowhere and disappeared into the dense forests just as quickly, gave French troops quite a scare.

A cliff atop the pinnacle is also perfect for hang-gliders, while holidaymakers can also take a comfy rest at a bungalow nearby.

Khau Pha Pass and its surroundings have been named a national scenic spot.

Toward the end of his trip, the Tuoi Tre reporter slowly descended the height and traversed Pha Din, a 32-kilometer pass which connects Dien Bien and Son La Provinces.

The historic pass is closely associated with the Dien Bien Phu victory over French colonial forces on May 7, 1954.

“Back then Pha Din Pass was so treacherous that it scared most motorcyclists. However, during the Dien Bien Phu Campaign, the mountain passage served as one of the main arteries in transporting food, necessities and cannons,” Tran Van Doi, one of the officers who fought in the battle, recounted.

“Intrepid soldiers were highly committed to their daring mission with French choppers circling above,” he added.

Streets in the vicinity of the pass have been expanded and had their elevation lowered by 200-400 meters since 2006, offering trekkers two options, one being safer and the other more daring.

The last of the northwestern region’s four greatest passes is Ma Pi Leng.

A Mong ethnic family on their way to a paddy field in Quan Ba District in the northern province of Ha Giang. Photo: Tuoi Tre

The pass is of huge historical significance as it is the hard-earned fruit of thousands of workers who dug through it during the 1950s and 1960s.

The breathtaking pass gives a gorgeous overall view of the thread-like Nho Que River beneath.

Villages of the Mong ethnic minority community in Giang Chu Phin Commune, of Meo Vac District, are nestled at around 1,200 to 1,300 meters above sea level.

The neighborhood, whose beauty has not been known to tourists until recently, is characterized by treacherous terrain and a hostile wintry climate.

This story belongs to a series of articles about Vietnam’s northern frontier region.