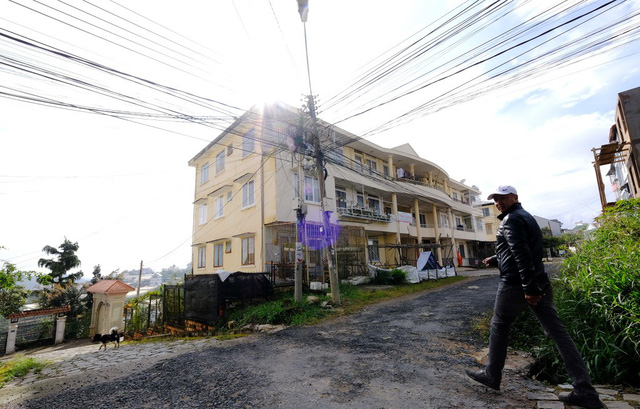 The one-time residence of army officer wives in Da Lat City remains an attraction in the calm resort town.

Prior to 1975, a complex called the ‘Girls’ Billet’ or ‘C5 Girls’ Billet’ remained tucked away near the Bao Dai Palace, the residence and offices of King Bao Dai (1913-1997), Vietnam’s last monarch.

To reach the complex, one would travel along a street called Darlec (now Trieu Viet Vuong) and then take a road overgrown by weeds, da quy (wild daisy), a flower synonymous with Da Lat, and pine trees.

The location is now a valley enclosed by Trieu Viet Vuong Street.

Considered an expert on the history of Da Lat and a resident for 60 years, Phi noted that the word ‘girls’ in the ‘Girls’ Billet’ did not refer to prostitutes as it does now.

According to Phi, the complex was previously a residential area for army officers and soldiers under the former political regime in Da Lat.

The army personnel, who were mostly either local residents or from neighboring areas, were granted accommodation at the complex as a way of relieving financial hardship.

Like other army residences in Da Lat, the complex was home to approximately 300 makeshift log cabins for the young families’ short-term stays.

Post-training, the army personnel, in particular young soldiers, were stationed at four strategic zones for long periods of time, leaving their young wives and children at home.

As in other villages established across the country, where wives would longingly wait for their husbands to return home from the battlefield, the young women there got on well and helped each other through the tough time of caring for their children alone.

This was when the name ‘Girls’ Billet’ came into being.

In May 1975, a marine commando battalion in Military Zone 6 had five companies stationed at strategic locations throughout Da Lat.

While other companies were tasked with ensuring safety at a nuclear research institution and other places where American troops were stationed, Company C5 took over the ‘Girls’ Billet’, and added C5 to the complex’s name.

“We were intrigued by the name ‘Girls’ Billet’ after receiving the takeover command. Our commander stressed that we handle the task with great care as only young women and children were still living there,” he recalled.

When Khanh and his comrades arrived, the complex was empty as the inhabitants had all moved out.

The complex was later pulled down to clear space for the construction of a condo on Nguyen Trung Truc Street to be inhabited by provincial civil servants.

The condo was named C5 after Company C5, though few locals know the story behind the ‘Girls’ Billet’ today.

In an interview with Tuoi Tre, Do Kim Hong, 70, an occupant of the ‘Girls’ Billet’ at the time, refuted a story that the young women would gamble while their husbands were away.

“Hundreds of young wives there had their hands full making a living and raising their children on their own. They were also anxious that their husbands would never come home,” she recalled.

“They really didn’t have the time or frame of mind to be gambling,” Hong said.