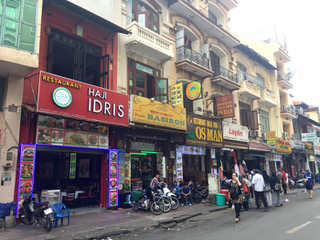 ​Malaysians should love this Saigon’s street

First started around eight years ago, the Malaysian corner along 100m of Nguyen An Ninh Street in downtown Saigon has been luring Malaysians to its variety of foods, clothings and other Malaysian products.

The street stands out with colorful signage in Malaysian language and mannequin wearing flamboyant Malaysian female clothes like tudung or baju kurung.

The whole street seems to be filled with a Malaysian aura.

According to a resident nearby, the Malaysians did enjoy big successes at first when they started selling clothes in 2010.

“Any Malaysian visiting Saigon will just drop by this area, but after some time they all moved out out business,” he added.

“I’ve no idea why they abandoned their shops. Perhaps they couldn’t compete against the local market.”

The Malaysian businesses were sold to the Islamic Chams living in Saigon. Chams, or Cham people, are a minority ethnic group bearing relation to Malays.

Every year as December approaches, this Malaysian street is more hustling than ever as this is the recession time for Malaysian students.

With Malaysian parents taking their kids to Vietnam on vacation, anything on the street can sell like hot cakes.

Your correspondent came across a peddler selling cakes in the middle of a scorching hot afternoon.

He is Dul Hamid, a Muslim Cham person. He has been selling cakes on his mobile cart for the last five years.

Displayed on his carts are pastel goreng, or spiral curry puffs and cassava cakes beautifully arranged.

Observation Hamid for a while, your correspondent could see some customers even buy ten packages of pastel goreng at a time in Malaysian Ringgit.

“I’ve just delivered 20 lunch boxes for a Malaysian tourist group. I’ve got my own hotline, so whenever they call I’ll make the foods and package them for delivery,” he said.

“They especially like cassava cakes. Sometimes I have to wake up at 3am as there are too many orders.”

Telling about his job, he said that after doing business in Malaysia for several years, he and his Vietnamese wife came back to Saigon, where they have been selling cakes and lunch servings until now.

Along this street, Basiroh is the most popular restaurant amongst the Malaysian community. It is named after its owner, a female Cham person living in Saigon.

When your correspondent arrived, Ms Basiroh was busying serving a tourist group from Kuala Lumpur and talking to them in Malaysian Malay.

“They came here after recommendations from my friends, so we actually consider each other on a friendly relationship,” she said.

Basiroh is proud to introduce herself as the first person to start this Malaysian street rolling.

“It all started near the end of the 1990s when I was a market researcher for a British corporation headquartered on Pasteur street, District 1,” she explained.

One day when she brought her foods down to eat on the facade of her office, a Malaysian tourist group saw her and asked: “Do you sell Muslim foods around here?”

Then they bombarded her with questions on where to find Malaysian clothes.

This gave her the idea of doing business in Malaysian clothes and foods.

For the next two years, Malaysians coming to Saigon were pleased at her service, and increased tourist influxes, Basiroh moved on to hire a place on Nguyen An Ninh street and opened a fashion boutique.

Malaysian customers coming to her clothes store often ask her for Muslim foods as well, and even ask her to cook for them.

From then on, she added foods to her services.

It was just a small kitchen at first with around three low stools by the road side, but then she turned it into a restaurant.

At one point she was owning three restaurants named Basiroh, the biggest success any businessman can see around this area.

“The Malaysians love pho. It’s weird really! They keep coming here thanks to word of mouth,” she commented on the Malaysian people’s taste.

Many of the Malaysian foods at her place also receive positive compliments from eaters.

To her, the key to success is the Vietnamese sauces of various types.

“At first I thought the Malaysians preferred bland taste, but after I added Vietnamese seasoning, especially fish sauce, they all take to it like ducks to water,” she shared.