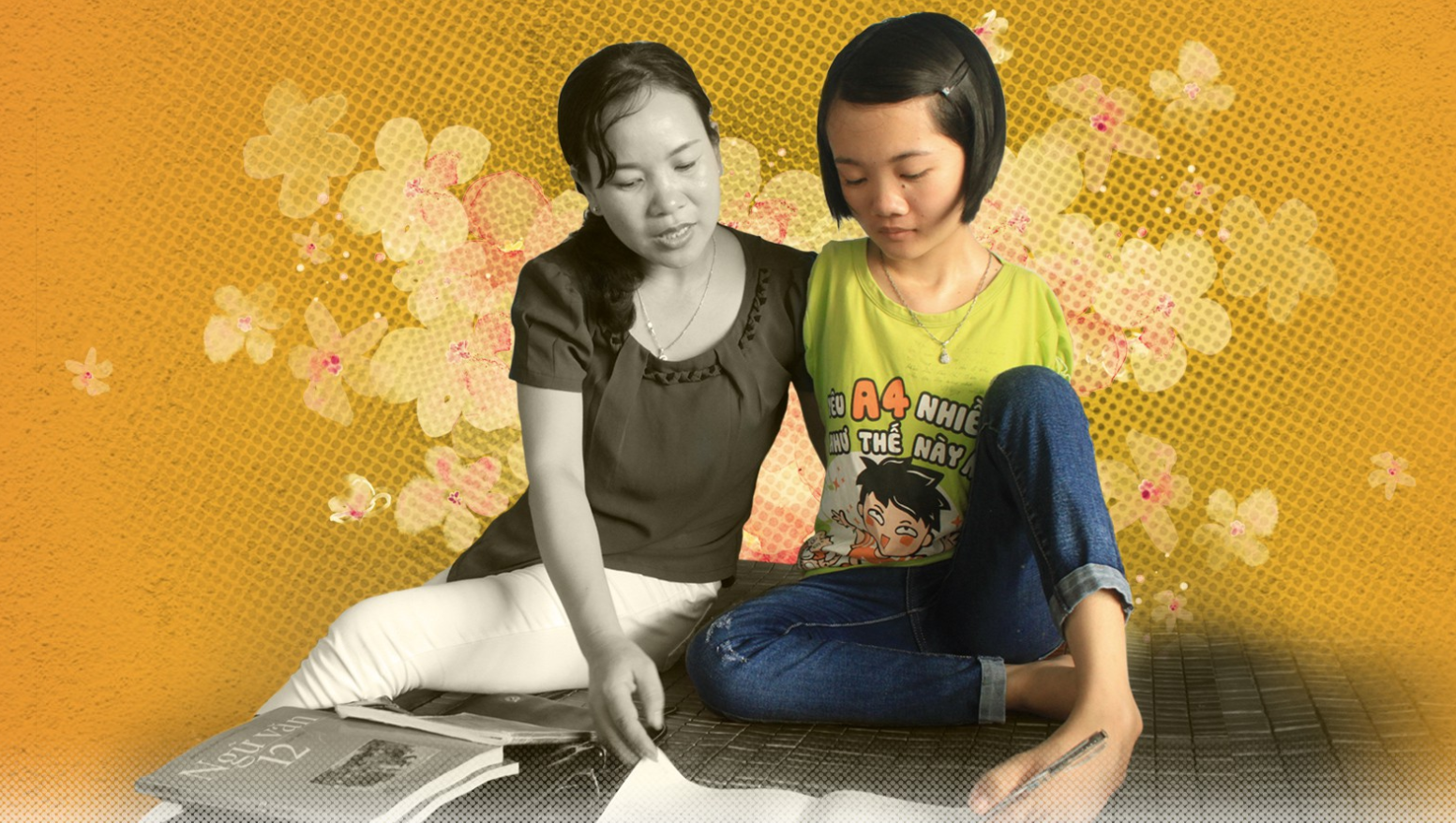 Le Thi Tham has never let the fact that she was born without arms derail her goals of becoming a Vietnamese language teacher for foreigners in Vietnam.

Throughout her life she’s experienced extreme hardship due to both her physical and socio-economic conditions.  At 19 years old she hasn’t’ grown past the size of a ten-year-old and her family lives far below the poverty line in Thanh Hoa.

But these hardships don’t seem to faze Tham.  Despite suffering from amelia and several other bone-related issues, she has managed to make it to her third year in university, where she studies ESL teaching and brings her A-game to any obstacles life throws at her.

Tham has always had a fiery desire to pursue education.

At six years old, while her peers were all being sent off to school, Tham persuaded her mother, Nguyen Thi Tinh, to let her go to, despite the fact that she was born without arms.

As she grew older, she set her sights on becoming fluent in English so that she might use those skills to instruct foreigners in learning Vietnamese.

As time went on, she earned respect as a top student in her classes and became a role model for her peers, never letting her disability get in her way.  In one particular show of drive, she won a seemingly unattainable prize for a girl with no arms – a handwriting contest award held by her district.

Though she wanted to take the Vietnamese university entrance examination, she was deemed physically incapable of being able to sit for such a long exam.  Her mother then took charge, venturing herself to the nearby Hong Duc University to petition them to allow Tham to take the test.

Nguyen Manh An, the principal at the time, after hearing out the plea, immediately gave consent, and vowed to assist Tham however he could.

Overjoyed with the news, Tham threw herself into preparing the exam.

Though she was resilient enough to show up at the testing location, her body could not handle the pressure, and Tham failed.

By will of fate, the principal, owing to her disability and sheer resolution, deemed Tham an exception, and admitted her into the university’s English Department, ESL Faculty.

Now, as part of her goal to one day instruct English-speaking foreigners in Vietnamese, Le Thi Tham works as a student-teacher with her own batch of students.

During the day she studies English teaching at university and in her free time she offers a tutoring service.

“Tham is so kind. Her pedagogical approach is also easy to comprehend. My mother lets me study under Tham on the weekends. She makes me like English so much,” one of Tham’s students, Phuong Linh, said.

For the mother, Tinh, her daugher’s leap from a disabled child to a respected adult makes her the happiest woman on Earth.

“Due to her academic achievement despite precarious living situation, Tham is eligible to a VND510,000 [US$21.94] monthly state-funded grant,” Tinh revealed.

“Just in November, she was awarded for her extraordinary academic performance from Deputy Prime Minister Vu Duc Dam himself!” she added.

Tham’s father is a bricklayer and her mother a housewife.  Neither expected that their first born child would be born without arms.  Likewise, neither expected their daughter to have such drive.

When school age hit, Tham did not want to lose out to her peers and began her first attempts at writing by using her feet.

Through sheer force of will, Tham finally enrolled at Hong Duc University, setting her fist stepping stone to become a full-fledged Vietnamese language teacher in place.

However, she was met with financial crisis, which meant her dream could be cut off at any moment.

Yet thanks to principal An, the situation took a turn for the better.  An reached out to a long-time acquaintance, Vietnamese lawmaker Bui Si Loi, who offered VND2 million (US$86.02) from his salary to Tham as a monthly incentive to help her afford her studies until she graduates.

“I am honored to be of help to such a noble soul like Tham,” Loi stated.

In the future, Tham aims to pursue knowledge overseas.

As her dream is not to teach English, but use it as a tool to instruct foreigners of her mother tongue, she yearns to learn more about the world in order to better improve her performance.

While the task at hand seems daunting, there is no way Le Thi Tham, the girl who has done the impossible countless times, would throw in the towel anytime soon.