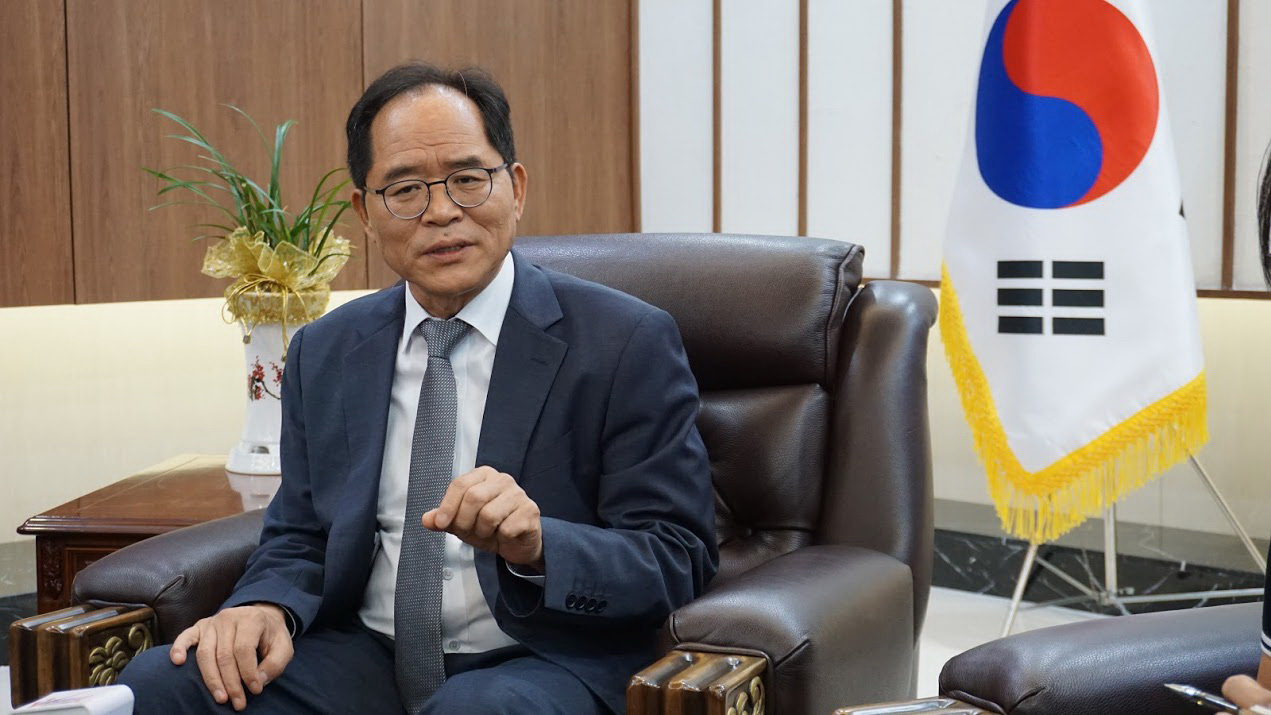 Vietnam is the central cooperation partner of South Korea’s New Southern Policy, and the economic cooperation between the two countries is playing a leading role in that between South Korea and the Association of Southeast Asian Nations (ASEAN), South Korean Ambassador to Vietnam Park Noh Wan told Tuoi Tre News in an interview.

ASEAN leaders are in the Republic of Korea (ROK), the formal name of South Korea, to attend the 2019 ASEAN-ROK Commemorative Summit and related summits held in the city of Busan from November 25 to 26.

The summit marks the 30th anniversary of the dialogue partnership between ASEAN and South Korea and is also the biggest international conference South Korea has hosted under President Moon Jae In’s administration.

He emphasized the role of Vietnam and ASEAN in South Korea’s New Southern Policy, which aims to deepen its ties with Southeast Asia as part of a drive to widen its diplomatic options while curbing Seoul’s reliance on its neighbors in terms of trade and security.

Tuoi Tre News enquired Ambassador Park about South Korea’s advantages in its competition with the influences of such major powers as China, Japan, the United States, and the European Union, which are also trying to sway ASEAN countries.

Ambassador Park insisted that South Korea has shared a common history and culture with ASEAN and is also a close and reliable friend of the region.

In addition, he said, South Korea is the only country in the world that has experience in shifting from a recipient to a giver of foreign aid.

South Korea President Moon Jae In realized the importance and growth potential of ASEAN, so the president advocated a New Southern Policy to upgrade relations with ASEAN to a level of four major countries (the United States, China, Japan, and Russia) and is implementing this policy as a central strategy for the national development.

Even before that, strengthening cooperation with ASEAN has been one of the main foreign missions of the South Korean government, but the diplomatic effort to take the New Southern Policy as the starting point has been officially started.

Immediately after taking office, President Moon Jae In sent special envoys to Vietnam and other ASEAN countries and became the first South Korea President to complete a tour across ten ASEAN countries in his tenure.

In fact, ASEAN is a very important partner of South Korea in the fields of economy, diplomacy, and security. The significance will be greater in the future.

ASEAN is South Korea’s second-largest partner in the fields of trade, investment, and construction.

The people-to-people exchange between South Korea and the ASEAN bloc surpassed 11 million for the first time last year.

ASEAN is also the most-visited region by Koreans. Currently, more than 300,000 Korean expatriates are living in the ASEAN region and acting as an important community of the indigenous society.

In particular, as we can see, major countries have announced regional cooperation initiatives that include ASEAN. This shows that ASEAN is a very important geopolitical region.

We will also continue to study options to connect those initiatives with the New Southern Policy of South Korea.

With good ASEAN-Korea relations spanning decades, why is 2019 selected to host the summit? The last two summits were in 2009 and 2014. Are there reasons behind these milestones?

2019 marks the 30th anniversary of the dialogue relationship between South Korea and ASEAN.

This year’s ASEAN-ROK Commemorative Summit, the third of its kind, is held in South Korea, following the two summits held in 2009 and 2014.

Out of the ten dialogue partners of ASEAN, including the United States, Japan, and China, South Korea is the first country to have organized commemorative summits with ASEAN outside the region three times. This shows how highly South Korea regards the importance of ASEAN.

The organization of such events is also possible thanks to ASEAN’s trust and support for South Korea’s ASEAN policy as well as for the ASEAN-Korea cooperation relations.

The third ASEAN-ROK Commemorative Summit is an important diplomatic event to symbolize the New Southern Policy and the first multilateral summit hosted by the Moon Jae In government.

This is a large-scale event, which is expected to attract the participation of more than 10,000 delegates, including leaders and spouses of the ten ASEAN countries, government delegates, business representatives, and the press.

Besides, the Mekong-ROK Summit will be held for the first time with the participation of leaders of five countries in the Mekong River basin (Vietnam, Thailand, Cambodia, Laos, and Myanmar).

Following the ASEAN-ROK Commemorative Summit in Busan on November 25-26, the first Mekong-ROK Summit will be held on November 27.

Through these events, South Korea desires to promote substantive cooperation with the ASEAN and Mekong regions.

What is the focus of this year’s summit? What message does the South Korea side want to convey to ASEAN countries? What are the key areas in trade and investment that South Korea wants ASEAN and Vietnam to focus on?

This is the vision for developing the cooperation relations focusing on economic and trade fields in the past into balanced cooperation, which involves politics-diplomacy and culture-society.

First of all, this policy demonstrates the determination to continue deepening the people-centered ASEAN-Korea partnership.

South Korea will improve visa policies and enhance future generations’ capacity, such as expanding scholarship programs and increasing mutual understanding through promoting exchanges and interactions between the countries.

Second, South Korea will expand the bilateral trade cooperation with ASEAN to build a community with real prosperity, while ensuring momentum and growth through digital economic cooperation in response to the Fourth Industrial Revolution (Industry 4.0).

Vietnam now accounts for nearly half of the New Southern Policy in almost all fields such as trade, investment, people-to-people exchange, official development assistance (ODA), and others.

Recently, 15 countries, including ten ASEAN members and South Korea, concluded the negotiations of the Regional Comprehensive Economic Partnership (RCEP), the largest free trade agreement with a market accounting for half of the world’s population and a third of the global GDP.

As a country that has signed a free trade pact with ASEAN and a bilateral free trade agreement with Vietnam, South Korea expect that economic cooperation with ASEAN member countries will leap to a higher level thanks to RCEP.

The first Mekong-ROK Summit is expected to bring about meaningful results to address development disparities in the Mekong region.

Concerning this issue, for Vietnam alone, we will focus more on developing the central region and the Mekong basin, which remain underprivileged and have not yet attracted much investment from South Korean businesses.

Finally, for the peace and prosperity of the region, South Korea will join ASEAN in discussing ways to strengthen cooperation between the two sides to fully denuclearize and establish permanent peace on the Korean Peninsula and toward strengthening substantive cooperation in the diverse non-traditional security areas.

There is an opinion that the current world order with many fluctuations and challenges including the issues of U.S.-China competition, Brexit, East Vietnam Sea, and Japan-Korea tensions are contributing to pulling South Korea and ASEAN closer. How do you evaluate this judgment?

ASEAN countries have differences in their political systems and levels of economic development but have been good at managing the differences through step-by-step, enduring dialogue and close cooperation to develop into a model for flexible and cooperative mechanisms.

Recently, while many key countries have announced regional cooperation initiatives around ASEAN, the bloc has initiated “centrality,” expressed its independent position and showed the development capacity as a key member of the international community.

South Korea highly appreciates ASEAN's position on the Indo-Pacific region, as expressed in the ASEAN Outlook on Indo-Pacific, and will continue to seek the possibility of cooperating with our New Southern Policy.

In ASEAN, what role does Vietnam play to South Korea? What is special about Vietnam’s role compared to the rest of ASEAN (if any)?

As I have put it, Vietnam accounts for nearly half of the New Southern Policy in almost all fields.

It can be said that Vietnam is now one of South Korea’s four biggest economic partners besides the United States, China, and Japan.

I think the continuous economic cooperation between South Korea and Vietnam will become one of the good models that other ASEAN members would want to pursue.

With the desire to work together with ASEAN toward a prosperous community, South Korea will continue to develop and deepen the Korea-ASEAN cooperation relationship where the Korea-Vietnam relationship plays the key role.

In particular, in 2020, Vietnam will take on the role of the ASEAN chair and co-chair of Korea-Mekong cooperation, so it can be seen that 2020 will be an extremely important year of Korea–Vietnam relations.

As South Korea strengthens its cooperative relations with ASEAN, I look forward to the role of Vietnam as a reliable partner who always understands and supports South Korea.