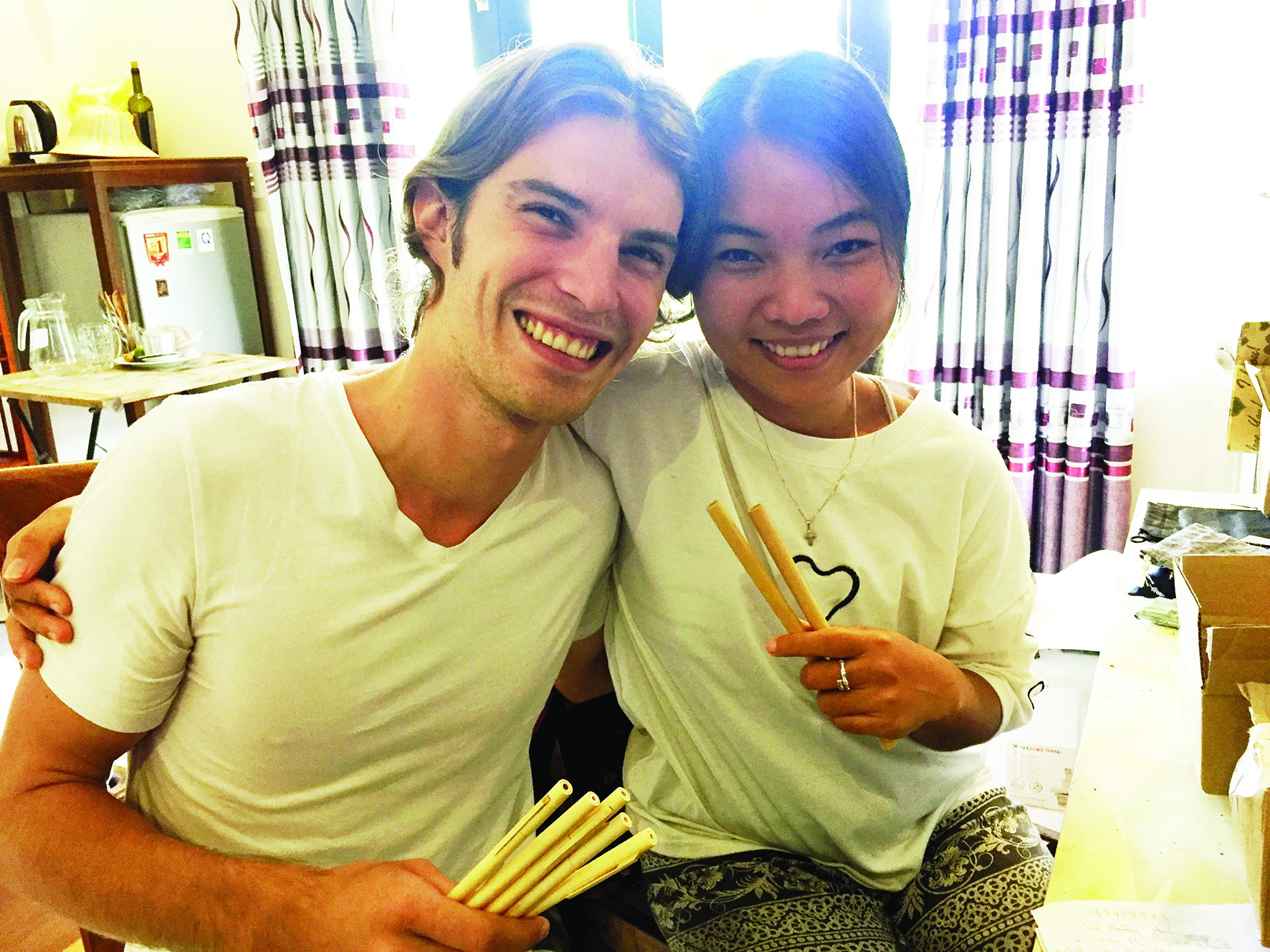 A 26-year-old German with a full life back in Germany has decided to settle down in Vietnam’s Hoi An with his Vietnamese wife-to-be out of love for the central city, after which they have decided to name their first-born.

Hoi An is currently home to around 300 non-Vietnamese citizens, many of whom are married to locals and run businesses in the city.

Jens Reiser from Germany is not an exception.

His choice to settle down in Hoi An came after the man had traveled the country with his Vietnamese girlfriend.

The aroma of incense

It was a drizzling day. Reiser and his partner were strolling hand-in-hand around Hoi An Ancient Town when the man’s strides were abruptly halted by the air around a small fabrics store on Nguyen Thai Hoc Street.

The aromatic incense tapped into his every olfactory nerve cell, nailing into his subconscious an urge to settle down right there, where the scent is everywhere.

Their story began in 2018 when Tran Thi Hong Nhung, 27, was working as a tour guide for an organic farm on Phu Quoc Island, off the southern Vietnamese province of Kien Giang.

One day, she was drawn to a likable face among a German tourist group. It was Reiser's.

Originally from Can Tho City in the Mekong Delta, Nhung would talk to Reiser all about the massive paddy fields from her homeland and the popularity of Vietnamese rice products all over the world.

Reiser, on his part, told her how he was not content with his life, which was too stable for his liking and filled with a sense that “everything is in its place.”

Bored by the repetitiveness of his mundane job and the convenient life he was born into, Reiser seemed to have hit the jackpot when he found in Nhung a partner with whom he could go on adventurous road trips.

The couple set out to journey the whole of Vietnam, but Hoi An was the one destination that called to them.

As your correspondent visited the couple at their rented homestay on the outskirts of the city last year, the couple were busy getting paperwork finished for their coming wedding ceremony.

“I’m from Can Tho. My parents-in-law are in Germany. But we’re going to host the wedding reception at a small seaside restaurant on a Hoi An beach,” Nhung said.

“We believe it will be a wedding to remember for everyone.”

The land of happiness

After the couple’s trip to Hoi An, Reiser confessed to Nhung how the scent of incense had left a lasting impact on him, saying he felt that Vietnam had become a part of his soul.

“My husband said it would be awesome to have a small cottage in Hoi An, where he once meandered around and got struck by the aroma of incense,” the wife-to-be said.

“To him, it is a special smell that he couldn’t find anywhere else.”

The way they see it, the uniqueness of the city lies in its utmost security and friendliness.

Rarely can one find a place like Hoi An where all types of tourists, be they domestic visitors, international tourists, or backpackers, are treated equally.

However, to get by in their new home, Nhung and Reiser knew they needed a source of income.

Their first undertaking was selling eco-friendly household products such as wooden toothbrushes and bamboo utensils.

As he sought customers and supplies, she was in charge of building a website for their small business.

They were rallying for the Tet, or Lunar New Year holiday, when the city was expected to welcome a mass influx of tourists.

The German man has taken note of Vietnam’s untapped potential for eco-tourism, where their products could thrive.

“We work for a living, but also for the joy of life,” Reiser said.

“We will get used to everything around here, including the food and our neighbors. Then we’ll save up to buy a home. Our kid will be a citizen of this ancient town.”

The couple revealed their intention to name their first-born Hoi An, after the city where they have found their groove.