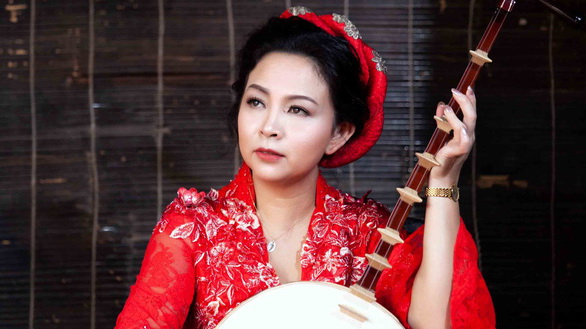 A Vietnamese-French playwright is bringing her love of traditional Vietnamese theater to Paris with her performance of a classic Vietnamese epic poem, in which she undertakes the dual role of writer and lead actor.

It is an art form she has been around her whole life, having grown up in the heart of Vietnam’s southern region – the Mekong Delta.

Though she was just ten years old when her family immigrated to France 36 years ago, her passion for don ca tai tu and its classics, particularly the classic song-poem Luc Van Tien, never faded.

Tien, now a professional actress and playwright, first brought her love of don ca tai tu to life in 2019 with a performance of Luc Van Tien at a Paris theater.

With a first foray into bringing traditional Vietnamese performance art to Paris under her belt, Tien’s next goal is to tackle a theatrical adaptation of Truyen Kieu (The Tale of Kieu) – the most notable work of one of Vietnam’s greatest poets, Nguyen Du.

Her take on the epic poem is currently scheduled to hit the stage at Théâtre Saint-Léon in Paris on March 29.

So far, half of the 500 or so available tickets for the performance have been sold.

Tien spent her childhood enchanted by her grandfather’s renditions of classic Vietnamese poetry recited alongside the twang of a don kim, a two-stringed Vietnamese instrument.

In 1984, at ten years old, Tien and her parents migrated to France. In 1993, she made her first return to Vietnam to visit her grandfather's grave.

During that trip she found a ‘gift’ from her grandfather – a notebook filled with musical arrangements designed for don ca tai tu.

Even today, with decades of experience learning don ca tai tu from some of Vietnam’s most well-known performers, that notebook still serves as the inspiration for her performances in Paris.

In addition to her stagecraft, Tien is a mother of two and works as a communications consultant. With so many responsibilities, much of her vocal practice is done while driving to work.

Her first music album Da (Night), a compilation of her ten favorite don ca tai tu tracks, was debuted in 2017. She released a second album, Thuong (Love), the following year to showcase her renditions of well-known Vietnamese folktales.

Her live musical performance of the 19th-century epic poem Luc Van Tien by Nguyen Dinh Chieu received acclaim from a mostly French audience and served as her motivation to write a theatrical adaptation of Truyen Kieu.

“Many older people told me, ‘you need to do Truyen Kieu.’ They said they wished to see Truyen Kieu performed onstage in the same way I did Luc Van Tien. That’s why I'm committed to this project despite countless obstacles,” Tien said.

After four years of scriptwriting, recording, and traveling back and forth between Vietnam and France to consult don ca tai tu veterans, Tien and her troupe, Coi Nguon, are finally ready to show off their work onstage.

Her adaptation of Truyen Kieu highlights the sounds of traditional Vietnamese musical instruments played with the influence of Western sounds.

The plot itself will be Western-influenced as well, with the story set in 2020 Paris where Nguyen Du has an unconventional encounter with a Vietnamese woman.

The play is narrated by Nguyen Du and the female lead in both French and Vietnamese to help guide audiences through the story.

Even with Tien’s modern ‘update,' the play will still hold the majority of its original charm.

“The original poem was already brilliant. I only needed to add a few ornamental fillers to ensure the rhythm, the same way others did before me,” Tien humbly said.

Devotion to the old sounds of Vietnam

“Though not formally trained, Tien shows an intense amount of dedication to the art of southern Vietnam’s don ca tai tu. Despite leaving Vietnam at a very young age, she still retains her southern Vietnamese dialect,” said Dr. Tran Quang Hai, an ethnomusicologist based in France.

“Her Coi Nguon troupe has already established its reputation and is attracting young talents to form a dynamic collective."

"This is my first time joining one of Tien’s projects,” said artist Le Tu, who will play a braveheart general in Tien’s rendition of Truyen Kieu.

“I am humbled and excited to have the opportunity to perform don ca tai tu abroad and promote my culture in France. I look up to Tien for her work ethic,” he added.

“Tien is always eager to learn and has a firm grasp on rhythm. Her voice is equal to that of any professional’s.”

To understand and love Vietnamese

Despite her childhood memories of Truyen Kieu read by her grandfather, it remains a challenge for Tien to fully understand the work. For her, Truyen Kieu is mainly an opportunity to showcase the elegance of the Vietnamese language.

Tien currently teaches the Vietnamese language to French children of Vietnamese origin. Her current curriculum is based on Truyen Kieu. The more she reads, the more she understands and feels a sense of attachment to Vietnam’s language and culture.

“No matter how many times I re-read Truyen Kieu, it never fails to point me toward a new perspective," Tien said.

"Even though I was worried about whether the novel coronavirus disease [COVID-19] epidemic would affect my upcoming play, I felt like I was able to gain some clarity after thinking about Kim’s [the protagonist’s promised husband in Truyen Kieu] words to Thuy Kieu during their reunion, ‘Thank heaven we are here today/To see the sun through parting fog and clouds.’”