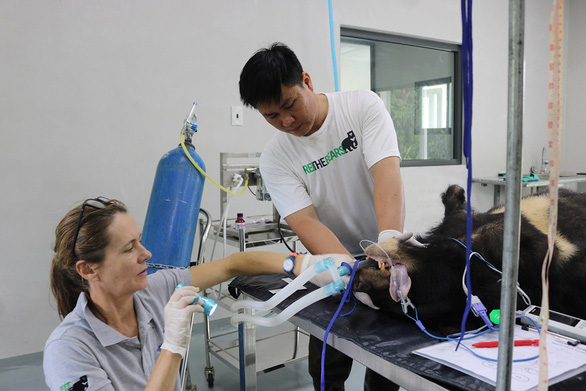 Located in Dong Nai Province’s Cat Tien National Park is a special sanctuary – a safe refuge for bears who spent much of their lives in tiny cages.

Wandering around the sanctuary – a safe space for rescued bears to live, eat and play – Nguyen Van Dung, Vietnam country director for Free The Bears, spends his days ensuring each bear is living a life of new-found freedom and happiness.

Dung has been the bears’ 'nanny' since 2014, six years after the sanctuary’s establishment. The majority of the bears he cares for were rescued from bear bile farms.

Before 2006, the center also saved bears that had been caught by traps in the wild.

Spanning over 12 hectares, the sanctuary is divided into two parts: an operations bloc which consists of an office and hospital and a housing area for the bears.

The bear housing bloc includes three houses set on a one-hectare plot. Currently, the sanctuary is hope to 41 bears, but that number is expected to rise to 100 once a new bear house is built.

Most of the bears are in good shape, far different from when they first arrived at the center.

“They were severely wounded. Some of them were even suffering from intestinal diseases or cancer,” Dung said, adding that many lacked certain joints that had been removed for sale or had limbs that had been amputated by bear traps.

“Recently, we received a bear from Bien Hoa City that had gallbladder cancer due to its bile being taken too many times," he said, referring to the capital of Dong Nai, which is located in southern Vietnam.

"There was nothing we could do to help.

"All we could do was watch it die."

After entering the sanctuary, rescued bears spend two to three months in quarantine while they undergo medical treatment and grouping.

In natural environments, bears live alone. At the center, however, due to limited space, the bears are grouped by their characteristics.

“There are just three bears in the smallest groups and 15 in the largest," Dung explained.

"They play together during the day and sleep alone in their rooms at night.

“Bears who don’t seem to get along well with others are typically kept in their rooms and given turns at the playground every six hours so that they don’t fight each other."

Adapting to life at the sanctuary is a process for many of the bears.

Those who have spent years in captivity have lost much of their survival instinct and must be trained to care for themselves.

“On their first days here, they were unable to climb or gather food because they had spent so many years in tiny cages," Dung recounted.

"Some even tried to kill themselves by smashing their heads into their cages.

"Some of the bears are too scared to eat because they worry they’ll be given anesthesia and have their bile extracted.

"We do our best to recreate their natural habitats so that they have an easier time integrating."

The bear habitat at the sanctuary is primarily a forest with pools, slides, and hammocks.

Rangers typically scatter veggies, nuts, and honey around the playground for the bears to find and eat.

“We hope to encourage them to move around and find food instead of waiting,” said Dung.

Those who have chronic stomachache or high blood pressure are restricted from sugar and carb.

It is impossible to release bears back to the wild, even when they are completely healthy.

“There are so many reasons we must keep them here," Dung said.

"How can we release them knowing they might be captured once again?

"How can they cope with the depletion of their food resources?”

Another major issue is that the bears are only able to regain about 30 percent of their natural instinct.

“Experience from Cambodia and Laos shows us that bears who are released back into the wild die or come back to sanctuaries because they cannot find food,” he added.

Still, Dung has hope that current research on reintroducing bears into the wild will lead to breakthroughs that can allow the residents at his sanctuary to lead happy, independent lives.

According to Dung, the most difficult part of his job is rescuing bears from the households where they are kept in captivity.

“We tell them that bile farming is now outlawed," he said.

"We explain that the bears have helped them earn money for years and now it is time to free them.

Dung hopes that the bears living in the sanctuary inspire people to speak up against bear bile farming.

“We set up photo traps in Cat Tien National Park in the hope of taking pictures of bears living in the wild," he said.

"In 2021, we plan to expand the operation to rescue more bears in southern localities.”

Chance and Hope are two bears who were rescued from a farm in 2001.

Chance lost four of her fingers while Hope lost her front right limb and some claws.

The two have been friends since their first day at the sanctuary.