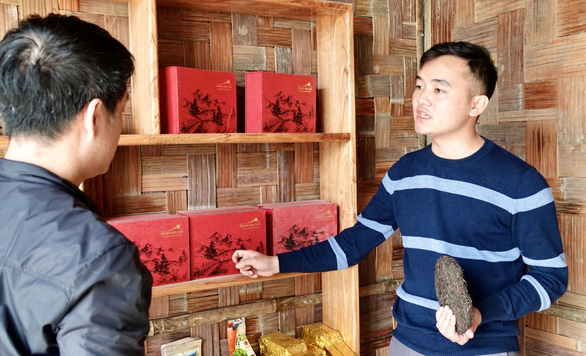 This Tay ethnic entrepreneur made a fortune from ‘shan tuyet’ tea

Living in a hamlet hiding on the edge of the forest in Ha Giang Province, Ha Ngoc Cham has spent his life roaming through the region’s mountains and amongst its ancient trees.

From a young age, Cham was told by the elderly in his community the story of the origin of the tea forest at the foot of the thousand-meter-high Tay Con Linh range.

To locals like Cham, the most typical kind of tea grown in Vietnam’s rocky mountain region is shan tuyet tea – a plant with large leaves and buds with snow-white hairs known for its intense vitality in the barren, cold land.

The young man – a member of the Tay ethnic minority –  knew that despite his hometown of Vi Xuyen being home to this rare and delicious tea, it had been impossible for locals to profit off the specialty.

“We have made ‘shan tuyet’ tea to meet our own community’s need for many years,” said Cham, “but I often thought about my hometown’s tea trees when I went to the Vietnam National University of Agriculture and how we could use them to our advantage.”

Cham recalled in 2013 when he joined some of his friends in mapping out an ambitious project to promote a shan tuyet brand named “Bo Duot” after the hamlet with the oldest tea trees in Vietnam.

“The project was awarded second prize at a national startup competition held in 2014,” Cham recalled.

Hoang Thi Thanh Huyen, who is now the chairwoman of Vi Xuyen Fatherland Front, was told about the project by Cham in 2016 when she was the secretary of the Ho Chi Minh Communist Youth Union of Vi Xuyen District. Cham talked to her about his desire to find a new way to promote shan tuyet tea.

The secretary was convinced at that time by Cham’s dedication and commitment to his hometown’s tea trees so she helped him set up meetings with youngsters and farmers from nearby tea growing areas. Cham presented them the idea of creating a production line that would build a brand name of shan tuyet tea called Phong Van.

As a member of the youth union, Cham had an opportunity to present his ideas to promote shan tuyet tea to the Viet Lam co-operative society, which attracted not only youth union members from Viet Lam Communte but also from Thuong Son Commute. Together, they raised more than VND1.2 billion (US$ 52,214) to set up factories and buy industrial machinery.

Cham instructs the locals on how to harvest tea in an effective and quality manner. Accordingly, the local tea farmers are taught how to collect tea leaves in form of “one young bud and one leaf” or “one young bud and two leaves” depending on harvest time and seasonal variation.

The tea leaves used by Phong Van are harvested manually then carried by bamboo buckets on the farmers’ backs or net bags to prevent them from being crushed.

Cham also figured out his own ways to make his typical kinds of tea, with various flavors that have always been ordered beyond the factory’s capability of production.

Cham makes fair payments for the tea products done, which make young workers believe in his way of running the factory and do more support to him.

“The Phong Van tea-making process involves many various stages, each of which is equally important. The most critical phase, however, is making teas with unique flavors, which often requires high-quality skills and experience,” explained Cham. “There is now not only a traditional kind of tea, but also several kinds and some of them take us from six to twelve months to get a finished line of product.”

The cooperative led by Cham currently offers 12 kinds, some of which sell for tens of million Vietnam dong per kilogram.