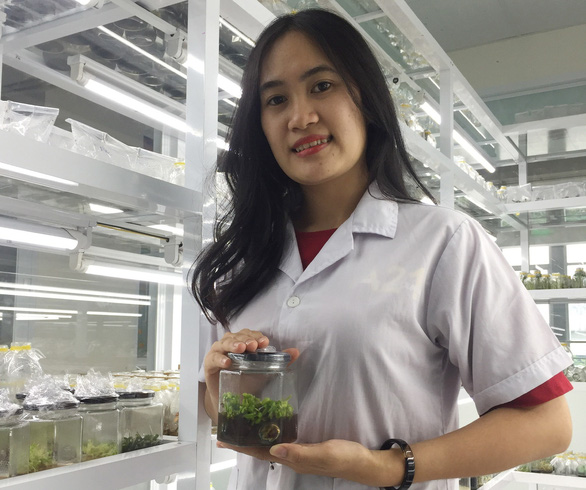 Prompted by a need to help her diabetic grandfather keep his condition in check, a college senior in Ho Chi Minh City has devoted herself to research and producing an herb-based drink that may add years to consumers’ life.

Do Thi Bao Ha, a senior from the Institute of Applied Sciences under the Ho Chi Minh City University of Technology (HUTECH), is gaining attention with her herbaceous ‘potion,' Golden Herbal Pharma, for its various health benefits.

The young woman aims to do even better in perfecting and launching her brainchild, which took her more than one year and a half to develop, onto the local market.

The idea of making a wholesome herb-infused drink came to Ha when she learned that her maternal grandfather had been diagnosed with diabetes.

As his health began worsening quickly, she decided to turn her worry into action.

“My thoughts immediately turned to concocting a ‘potion’ that could help grandpa and everyone else have better appetite and sleep,” Ha shared.

As she was trying to figure out what her first step could be, she learned about the variety of herbs with medicinal properties including nhan tran (Adenosma glutinosum), cam thao (Licorice), corn silk, and diep ha chau (Gripeweed) that grow in abundance in home gardens.

Despite already aware of how this bountiful supply can help prevent and control diabetes, Ha was at a loss for how to come up with the right extract amount.

“If the ingredients are tainted with even the smallest portion of chemicals, my nature-based project will fall into the gutter,” the student noted.

It took countless unsuccessful laboratory attempts over the eight months that followed before Ha was successful.

During these eight months, she became a fixture on a bus route along which she commuted every day from home to the laboratories in District 5 and District 9 (now Thu Duc City).

“Another challenge is how to combine the extracts in the right way,” Ha noted.

“I was always engrossed in books though we weren’t cramming for exams."

It was not an easy journey, however.

There were times when Ha wanted to give up as more than 150 experiments and chemical reactions did not go as she had expected.

Another setback is her lack of experience.

“There is knowledge which I haven’t learned in class or was unable to access on the Internet," she divulged.

Somehow the student found the courage to keep going and tried not to look back but move forward.

After trying out the product with some formulas she was most confident about on herself and her loved ones, Ha finally took it to the city’s Department of Science and Technology for official testing.

She pinned all her hopes as well as her entire savings from part-time jobs on the product.

With the stakes being high, Ha put forth all of her energy and crossed her fingers for the readings.

The indicators all came back encouraging, as the product meets all the biochemical, microbiological, and metal benchmarks.

Ha remembered shouting out of elation at the arrival of the results, which also came as an overwhelming wave of emotions for her.

“The drink works well on my grandpa and other relatives,” Ha proudly said.

The product beat nearly 100 other submissions to claim the first prize at HUTECH Startup Wings 2021, organized by the college she is studying at for students to promote their innovations.

Following her victory, Ha received offers from more than three investors to mass-produce the drink, but she declined them all to focus on her upcoming graduation project and continue to work toward her dream of developing her own product line.

Ha said she is lucky to always have her parents by her side.

“My parents promised to provide me with financial support to further develop the product line after I graduate from college,” she added.

According to Nguyen Hoang Dung, chairman of Sustainable Development Services and Leader Training Co. and former research and development director at the Ho Chi Minh City Institute of Economy and Management, Ha’s project is brilliant due to its high practicability and potential.

The project is also rich in humanitarian and community values as it supports the prevention and treatment of diabetes, which currently has no effective cure, the economic pundit noted.

“With extracts from medicinal herbs that grow in abundance, the drink, if developed well, will give a further boost to promoting the country’s herbal medicine in a sustainable way,” Dung said.

For the product to be an ultimate success, Ha should elevate her research to a higher level and work to build her own supply areas to ensure stability and quality in addition to complying with intellectual property laws, he added.