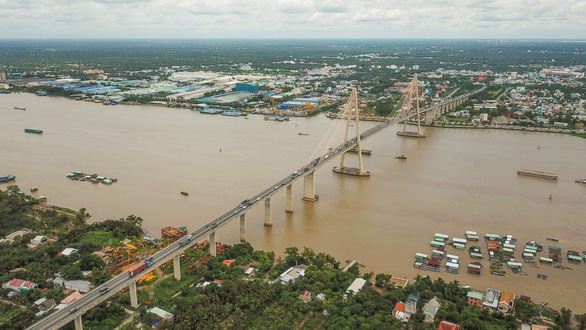 The Stimson Center, a nonprofit, nonpartisan U.S.-based think tank, recently presented evidence that the water levels in the Mekong River were about 1.4 meters higher than the average at the start of the rainy season, which poses a high risk of natural disasters to the ecology and livelihood of millions of people.

At a webinar, titled 'Where’s the Water: Mekong Dry Season' and organized by the Stimson Center last month, experts cited data showing that the Mekong Delta has experienced higher rainfall levels than the average in recent dry seasons.

One reason for the increased water level is that in the upper part of the river in the Tibetan plateau, the melting snow added a large volume of water to the Mekong River in the wake of the high temperature in April.

From April 25 to May 1, China's two largest hydroelectric dams, Noa Zhuodu and Xiaowan, released an estimated 3.7 billion cubic meters of water, equivalent to nearly 10 percent of the total water of the 45 largest dams, and caused the downstream water level to rise.

In May, the Mekong River received about six billion cubic meters of water from hydroelectric dams, most coming from China.

May also recorded the second-highest water level in the Mekong River since 1910.

According to experts, high water levels in the dry season will continue to cause adverse impacts on downstream rivers, including those in the Mekong Delta region in Vietnam.

​​Unnatural releases from dams upstream have entirely altered the natural flow of the river.

Due to that change, the Stung Treng Ramsar site in Cambodia, once being submerged for a few months a year during the annual flood season, is inundated almost all year round.

Ian Baird, from the geography department of the University of Wisconsin-Madison, said locals in Stung Treng Province told him that 95 percent of the small shrubs of the Stung Treng Ramsar site near the river had died due to the water encroachment.

For larger trees which serve as habitats for bird and fish species in northern Cambodia, the mortality rate is close to 50 percent.

It has severe consequences for the birds that nest in the trees and affect the catfish -- a fish species that eats leaves and fruits dropped from trees during the rainy season.

Baird said there was no doubt that the higher dry season river level in Stung Treng is the consequence of the discharge of water from the hydroelectric dam.

He suggested that water discharge should be reduced during the dry season to limit the impact on the ecosystem.

The impact of hydropower dams on the Mekong Delta

There are three possible scenarios related to the water retention and discharge of these dams.

The most common scenario is that the dams will hold some of the floodwater and store it in reservoirs for power generation in the dry season during the normal years with sufficient rainfall.

This lowers the flood peak of that year and increases the dry season run-off the following year.

The amount of water in the dry season can reduce drought and salinity in the Mekong Delta and it can be seen as having positive impacts.

In the second case, the chain of dams on the Mekong River can delay the time the Mekong Delta receives water in a dry year with water shortage.

Therefore, with severe drought and salinity, people will either have to abandon their crops or change their farming schedule.

In the third case, the dams will release water to relieve the pressure on their reservoirs in high flood years.

The water from the dams will add to the natural floodwater and together, they cause severe flooding downstream with extremely unpredictable impacts.

According to Thien, the dams on the river can bring about many consequences.

The accumulation of water during the rainy season slows the river pulse and weakens flood flows.

Weak floods are not able to load sand and sediment onto the Mekong Delta, which can result in riverbank and coastal erosion.

In addition, the abnormal discharge of water from hydroelectric dams also sends false signals to the river, disturbing the ecosystem.

When the dams suddenly release water in the dry season, some aquatic species might misunderstand the signal of the river, thinking it is time to spawn and migrate.

After spawning, the small fish cannot survive because the environment for them to grow is not there.

Then in the real flood season, shrimp and fish no longer reproduce.

The U.S. Consulate General in Ho Chi Minh City on June 28 held a seminar on solutions to protect the Mekong River with the participation of American and Vietnamese experts.

Dr. Van Pham Dang Tri, director of the Institute of Climate Change Research of Can Tho University in southern Vietnam, pointed out that the Mekong Delta region is facing serious challenges, including anthropogenic impacts such as biodiversity loss, pollution, subsidence, and more.

Tri said that to support the prosperous and sustainable development of the delta, more guidance from the Vietnamese government is needed.

Some guidance already exists and is reflected in Resolution 120 on the sustainable and climate-resilient development of the Mekong Delta and other specific governmental activities.

To better address the challenges of the delta, scientists need to engage with fundamental research.

It is important that the research’s recommendations are communicated, disseminated, and applied locally, Tri emphasized.

He said Can Tho University's current practice is to sign cooperation agreements with localities and invite businesses to join in supporting local development.

Issues such as land subsidence and sand mining are causing serious impacts on the Mekong Delta so, according to Tri, they should be discussed widely with the participation of relevant departments, agencies, and people to come up with practical and appropriate solutions.

“For example, groundwater extraction has been identified as the major cause of land subsidence in the Mekong Delta but we can’t simply ask the people to stop extracting it as in some areas, fresh water is not available,” he said.

Matthew E. Anderson, a biological scientist of the U.S. Geological Survey, agreed with Tri's comments and cited some preliminary data from a study about the impact of climate change on the groundwater accessibility of local communities in the Mekong River basin.

Depending on the economic characteristics of the locality -- such as cultivation or animal husbandry -- the need for groundwater is varied, Anderson said.

The level of vulnerability and adaptability of people to groundwater depends on many factors, including education level and support from social organizations and departments.

In Vietnam and Cambodia, people's ability to adapt and change is generally low.

At the seminar, experts all agreed that solutions for the Mekong River must be multi-sectoral, multilateral, among countries and domestic organizations, regionally and internationally, in addition to bilateral solutions.

Brian Eyler, Southeast Asia program director of the Stimson Center, said that transparency and information exchange are part of the solutions.

China should share data with downstream countries from its numerous monitoring stations and reservoirs upstream, something Beijing should have done three decades ago given the fragile ecology of the downstream Mekong, ever-increasing drought, and the tens of millions of people who rely on the river to survive.

China should have a clear notice to downstream countries before it releases water so that downstream communities can prepare for it.

According to Eyler, downstream countries also need to have their own early warning systems, monitoring the water level at the gauge to give early warnings to people.

Currently, the Mekong Dam Monitor, the near-real time tracking of dam operations and river flows, provides unique insights into the changes that dams have created to the Mekong River’s natural flow.

It has data to warn of water increasing 24 hours in advance.