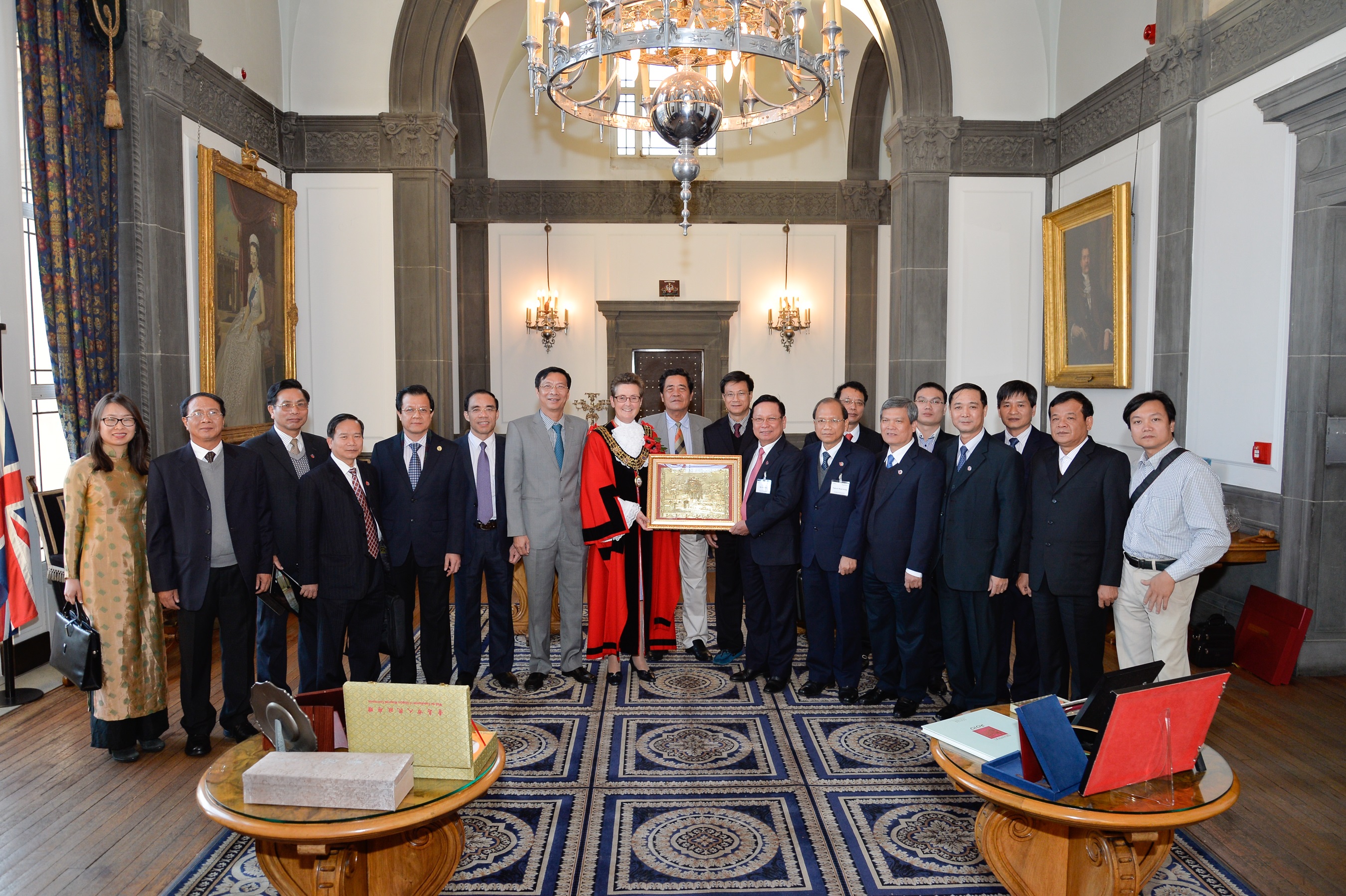 A Vietnamese professor in Britain and the "philosophy of the bus"

After six years as an associate professor at the Bath School of Management, Vietnamese lecturer Bui Thi Minh Hong decided to switch jobs and became a professor in education at Birmingham City University. This makes her the second Vietnamese professor in the UK.

Minh Hong's decision to move to Birmingham City University surprised many of her friends and students.

According to the public, Bath is better than Birmingham City in terms of working conditions and fame.

She has her own reasons for switching: "In Birmingham City, where there are more underprivileged students and two-thirds of them are black students, I think I can help them more."

A decision by nature

Before she went to the UK to study, Minh Hong was a young teacher in Hanoi.

Thinking back, she cannot forget the special memory of traveling with her students to the northern mountainous province of Lao Cai in 2000.

They had a volunteer mission at that time.

For the young teacher, it was a special feeling to see the joy on the faces of the poor children when they received the postcards made by the students.

She was also impressed when she saw the locals taking chairs to form a line from 4:00 pm, even though the students' performance was scheduled to take place three hours later.

This feeling impressed her so much that she wanted to do everything she could to help needy people in the following years of her life.

Minh Hong went abroad to study almost 20 years ago with less than US$200 and a monthly stipend from the scholarship.

She knows very well how many difficulties a Vietnamese intellectual has to overcome to achieve an academic goal under such difficult conditions.

As an Asian woman studying and working in a prestigious academic environment with more men than women, Minh Hong has to learn to adapt to racial and gender discrimination.

She learned to persist and build her career by always taking responsibility for her activities and not blaming anyone for her mistakes or imperfect results.

In addition, she has also learned to put aside her "big ego" and work with others to learn and work as a team in any work environment.

"I have a philosophy for myself that I call the 'philosophy of the bus," the Vietnamese professor tells.

“During my student years in the UK, I often took the bus to school. At that time, winter was too cold for me because of my slim body.

“In many cases, I had to run as fast as I could to keep up with the approaching bus if I did not want to wait another 30 minutes for the next ride," Minh Hong recalls.

"I remember a few times the bus driver flexibly stopped the vehicle for an extended period of time while watching me run after the bus.

“Successfully catching up with the bus made me think of my personal thoughts on how to master my life: We should try our best first, and if we try anyway, we have a chance," Hong added.

She has taught many generations of students over the past 20 years, and among her former students are many in leading positions in educational institutions.

Many of them sent grateful messages to the teacher thanking her for the inspiration they received from Bui Minh Hong during their days of learning from her, which made Hong incredibly happy.

Inspire your colleagues in Vietnam

As she cherished the dream of doing something useful for the community, Minh Hong felt like a "first touch point" with her soul at the special event to be held in Paris in 2019, when she was honored by AVSE Global as one of the most inspiring Vietnamese women in the world.

AVSE Global is a non-profit organization based in Paris, France that connects Vietnamese expats in different countries to advance the solution to key development challenges, making an important contribution to Vietnam's sustainable development and prosperity.

Since then, Minh Hong has been the leader of the Edunet network under AVSE (Education - AVSE Global) and has launched many projects to support her home country of Vietnam.

She and her staff succeeded in advising and convincing the northern mountainous province of Yen Bai to officially consider the happiness indicator as the main standard for measuring the development level of a province or city alongside a traditional indicator such as gross domestic product (GDP).

It also participated in an advisory project on reconstruction planning for the central province of Quang Tri after the flood crisis and helped produce a meaningful report on education in the digital age for Quang Tri.

The most useful experience Minh Hong has gained from these projects is that the learning process is never enough.

"If you find yourself repeating what you have said before, it is time to stop talking and start learning new things again, both knowledge and human skills."

Despite the upheaval caused by the COVID-19 pandemic in the projects of the teams of AVSE Global, the experts of Edunet, led by Minh Hong, managed to launch another ambitious program.

With the help of grants from the Aus4Skill program for former foreign students, Minh Hong and three other friends launched the Empowering Teachers for an Uncertain Future (ETUF) project.

The experienced Vietnamese education experts found that in Ho Chi Minh City, the gap between rich and poor in educational choices is widening.

There are more and more wealthy families who prefer to send their children to study abroad rather than studying at home.

"We believe that the role of teachers in our time needs to change compared to the past," Minh Hong said.

"Teachers are not people who know everything. We want to carry out a project to inspire not only teachers in Ho Chi Minh City but also nationwide.

"We would like to discuss with teachers about various aspects of education such as ethics, innovation, leadership, and teachers' inspirational ability in our digital age with many changes," Minh Hong explained the goals of ETUF.

ETUF was launched early last year with a combination of online courses and offline workshops.

The project is expected to last one year and be completed around the first months of 2023.

As part of the project, Doctor of Educational Technology Andy Nguyen, a postdoctoral researcher at the College of Oulu in Finland and deputy director of Edunet-AVSE Global, held a workshop on "Education in the Digital Age" at Ho Chi Minh City College of Education on July 30, 2022.

The latest course launched by ETUF is "Applying Critical and Innovative Thinking in Teaching and Learning" with inspirational speaker To Thuy Diem Quyen, founder, and CEO of educational organization InnEdu & POWAI.

The grant is being used to organize and pay a small allowance to lecturers who participate in ETUF, while the four organizers do so for free.

"The program is limited, but we are "greedy", we want to bring as much content as possible," Minh Hong said.

Her research focuses on learning organizations, organizational studies, and an interdisciplinary approach to innovation and sustainability. Hong co-edits The Learning Organization and Applied Psychology: An International Review.

She has an extensive network with researchers, practitioners, and policymakers across disciplines working on major challenges such as sustainable cities, new energy, innovation, climate change, and healthcare in the United Kingdom and many developing countries worldwide.

Hong is enthusiastic about developing business education to transform society towards innovation and sustainability.

Forbes Vietnam included her in its 20 Inspiring Women 2021 list.