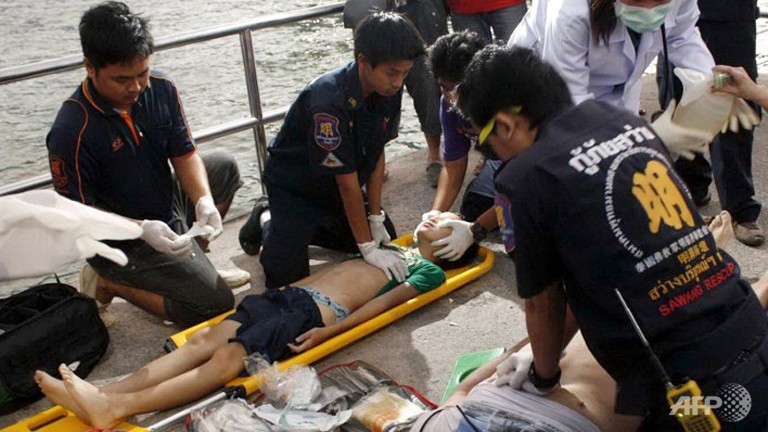 PATTAYA – Thai divers searched Monday for the wreck of a crowded tourist ferry which sank leaving six dead including three foreigners, as rescuers recounted plucking victims from the water.

Three Thais, one person from Hong Kong and two other unidentified foreigners were among the dead, according to police in the tourist resort of Pattaya, around 150 kilometres (100 miles) southeast of Bangkok.

They said all of the other 150-200 passengers were believed to have been rescued. Nineteen people were also injured.

The double-decker ferry went down on Sunday afternoon near Koh Larn, a small island popular with day-trippers from Pattaya, a popular beach resort renowned for its racy nightlife.

"The captain ran away. We will issue an arrest warrant for him," he said. "Divers will recover the boat today. We still don't know the cause."

Stunned tourists were seen being led to safety on shore on Sunday where they were met by dozens of ambulances along Pattaya's neon-lit beachfront. Medics performed emergency first aid on injured passengers.

Accidents involving boats, buses and other forms of public transportation are common in Thailand, where safety standards are generally poor.

"We still don't know the reason for the accident. I am not sure if there are more dead or not, because we don't know how many people were on the boat," Thai rescue diver Suttipong Boonmachai said.

"Today we are going to recover the boat. We will use underwater detection equipment," he told AFP on Pattaya's main pier.

A local boat captain who witnessed the tragedy recounted throwing life jackets to passengers floating in the water.

"I saw 100 people – most of them foreigners – in the water," he said. "I threw 50 life jackets into the water. There was one man, he was not breathing. We pulled him out of the water."

Russian news reports said three Russians, including a child, had been taken to hospital in a serious condition.

"At least half of the passengers were Russian tourists," a Russian embassy official in Bangkok was quoted as saying by the Ria Novosti news agency.

On Pattaya's main pier it was business as usual Monday for the operators of double-decker wooden ferries preparing to take tourists out on day cruises.

"After an accident like this the boats should be grounded for checks but today they are all running," said a European working in the city's marine tourism industry who spoke on condition of anonymity.

"The boats are very old. There's no maintenance. They are always overcrowded... there's no head count."

Renowned for its strip clubs and bars and cheap accommodation, Pattaya is one of Thailand's most popular resort areas and has become popular as a package holiday destination for Russian families.

Thailand drew 22 million tourists last year, but is struggling to shake off a reputation for lax safety standards after a series of incidents.

In May more than 100 people were rescued from a tourist ferry which began to sink in rough seas near the tourist island of Phuket.

Diplomats from China and the European Union have voiced concern at the number of fatal incidents involving their tourists.

In recent years the kingdom's tourist-friendly image as the "Land of Smiles" has also been tarnished by political violence, crimes against foreigners and devastating floods.