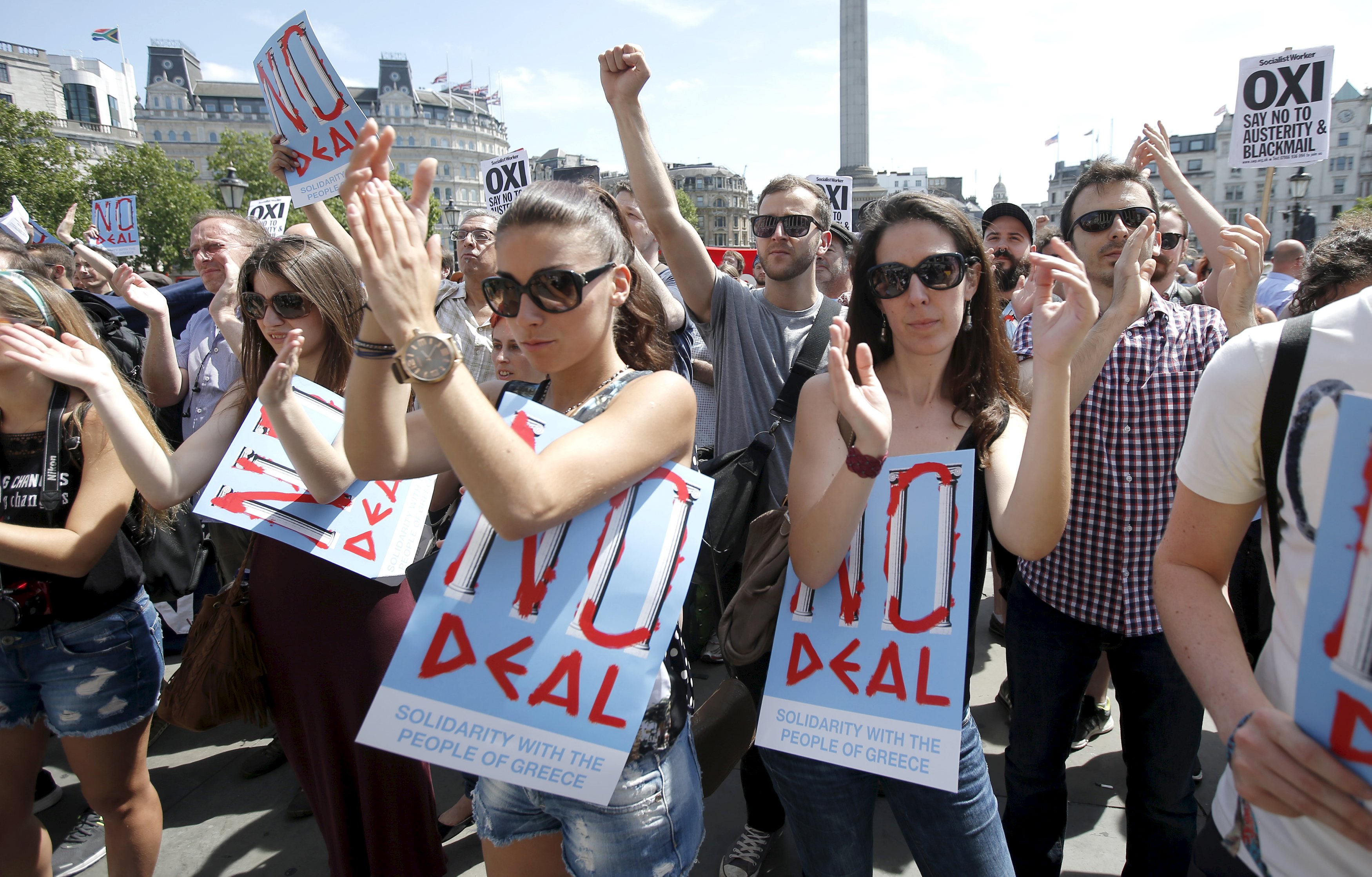 Greece votes in referendum with future in euro in doubt

ATHENS, July 5 – Greece voted on Sunday on whether to accept more austerity in exchange for international aid, in a high-stakes referendum likely to determine whether it leaves the euro-currency area after seven years of economic pain.

Staged against a backdrop of shuttered banks and threats of financial apocalypse, the vote is too close to call and may not produce the clear mandate for negotiations that Athens' creditors seek.

Greeks are split on whether to accept an offer by creditors that Prime Minister Alexis Tsipras calls a "humiliation" and is urging people to reject. Investors and European policymakers say a rejection would set Greece on a path out of the euro, destabilising the global economy and financial markets.

"On Sunday we should all send a message of democracy and dignity to the world," Tsipras told tens of thousands of Greeks rallying for a 'No' vote before campaigning ended.

Voting on whether to accept more taxes and pension cuts would be divisive in any nation, even at the best of times.

In Greece, the choice is faced by an angry and exhausted population who, after five years of crippling austerity, have now suffered through a week of capital controls imposed to prevent the collapse of the nation's financial system.

Pensioners besieging bank gates to claim their retirement benefits, only to leave empty-handed and in tears, have become a symbol of the nation's dramatic fall over the past decade.

Eleven years ago, in the early morning of July 5, 2004, Greeks poured into the streets, united in celebration of their country's victory in the European Cup soccer tournament. Today, Greece is divided – and scared – as rarely before.

"There is an atmosphere of fear. You can just feel it," said Giorgos Sarafianos, a 60-year-old teacher in Athens, who said he would vote in favour of the creditors' proposals.

Four opinion polls published on Friday showed the 'Yes' vote marginally ahead. A fifth put the 'No' camp 0.5 percentage points in front. All were well within the margin of error.

Anxious Greeks rallying for a 'Yes' vote agree Greece has been handed a raw deal but say the alternative, a collapse of the banks and a return of the old drachma currency, would be worse.

Those pledging to deliver a rousing 'No' to tax hikes and pension cuts in return for more loans say Greece cannot afford more of the austerity that has left one in four without a job. They agree with Tsipras that Europe is "blackmailing" Greece.

"As a Greek woman, I am embarrassed at those who are going to vote 'Yes' for fear of leaving the euro. They are asking us to accept unending slavery. I am offended," said Tenekidou Ermioni, a 54-year-old teacher.

Greeks are likely to face more financial and political turmoil in the days and weeks ahead.

"All in all, Prime Minister Alexis Tispras' early exit from office is still more likely than Grexit," wrote Wolfgang Piccoli of Teneo Intelligence.

"Regardless of Sunday's result, significant levels of political volatility are here to stay."

Finance Minister Yanis Varoufakis promised Greeks on the eve of the vote that European creditors would immediately have to grant Athens better terms, including massive debt relief and less austerity, if they voted 'No'. EU ministers and officials have warned that his pledge is a cruel illusion.

If Greeks vote 'Yes' to the bailout, both Tsipras and Varoufakis are expected to resign – triggering a new chapter of uncertainty as political parties try to cobble together a national unity government to keep talks with lenders going until elections are held.

European creditors have said a 'Yes' vote will resurrect hopes of aid to Greece. But capital controls, and default last week to the IMF, have undermined Greece's economic standing and creditworthiness, so a new bailout package would probably entail harsher terms than those on offer even last week.

A 'No' vote would bring even greater uncertainty, and the prospect of a sudden financial collapse.

European policymakers have openly warned such a result would be read as a rejection of talks with creditors and the euro, leaving Greece to fend for itself without any realistic prospect of funds to avoid bankruptcy.

Much would depend on the European Central Bank, which will review on Monday morning its policy on emergency liquidity, which Greek lenders rely on.

The ECB could decide to freeze the liquidity or cut it off altogether if Greeks vote 'No', or if Athens subsequently defaults on a bond redemption to the ECB on July 20.

There is concern that an inconclusive result might sow further confusion, and possibly lead to violent protests, rather than sending a clear signal about Greek intentions.

"The nightmare result would be 51-49 percent in either direction," a senior German official said. "And the chances of this are not insignificant."