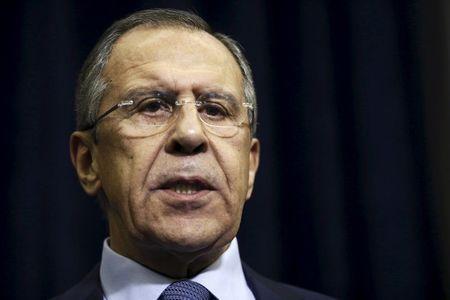 MOSCOW - Russian Foreign Minister Sergei Lavrov said on Wednesday Russia did not intend to wage a war against Turkey after its air force shot down a Russian jet near the Turkish border with Syria.

"We do not intend to wage a war on Turkey. Our attitude to the Turkish people has not changed. We have questions over the action of Turkey's current leadership," Lavrov told a news conference.

Lavrov, who cancelled a trip to Istanbul scheduled for Wednesday, said Russia viewed the downing as a planned act and Moscow would "seriously reconsider" its relations with Ankara.

When asked if future talks were being prepared, Lavrov said there were no plans to send any officials to Turkey and that Moscow did not plan to host any Turkish visits.

A Turkish foreign ministry spokesman said on Wednesday Lavrov and his counterpart Mevlut Cavusoglu had agreed to meet in the coming days, a statement later denied by Moscow.

It was not immediately clear whether Turkish President Tayyip Erdogan's planned visit to Moscow on Dec. 15 would be cancelled.