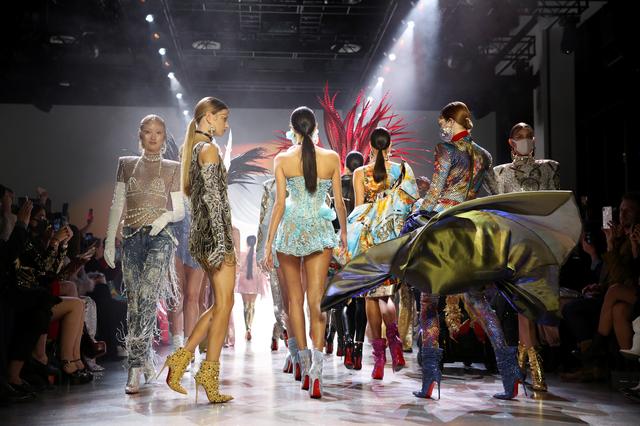 NEW YORK -- New York Fashion Week will look a little different this season, with the typical seven-day parade of events stripped down to five days because of COVID-19 restrictions, with online runway shows, and smaller, socially distanced audiences.

Host IMG said it had worked closely with the governor’s office to understand the protocols needed in order to have the shows running from Sept. 13-17.

“We evolved the event and our offerings to designers to be able to create an event that’s both safe and successful ... and that allows consumers to tune in to watch and participate,” said global senior vice president of marketing and brand strategy at IMG, April Guidone.

Highlights this season include Jason Wu, Rebecca Minkoff and Christian Siriano, who will show from his Connecticut home. Partnering with U.S. hardware store Lowes, each designer will create sets “with home décor products they found at Lowes.”

“We are offering the rooftop at Spring (Studios) to designers for more traditional runway shows that may have a very small and limited, socially distant audience,” said Guidone.

Designers will use the indoor venues that previously hosted large runway shows to debut their collections in new ways, such as by creating films or content for social media. “And then we’ll release that content on schedule as if it’s live,” Guidone said.

The content, along with panels and special events, will be broadcasted on NYFW.com. The Council of Fashion Designers of America has also created a new digital platform, Runway360.com, to air various runway shows.

Brooklyn-based model Anok Yai has been working in London since March and described the few shows she has done during the pandemic as “very strange.”

“Everything obviously is very spaced out,” said Yai, noting that in the past 100 people would be in one room doing hair and makeup, but now it is less than a dozen.