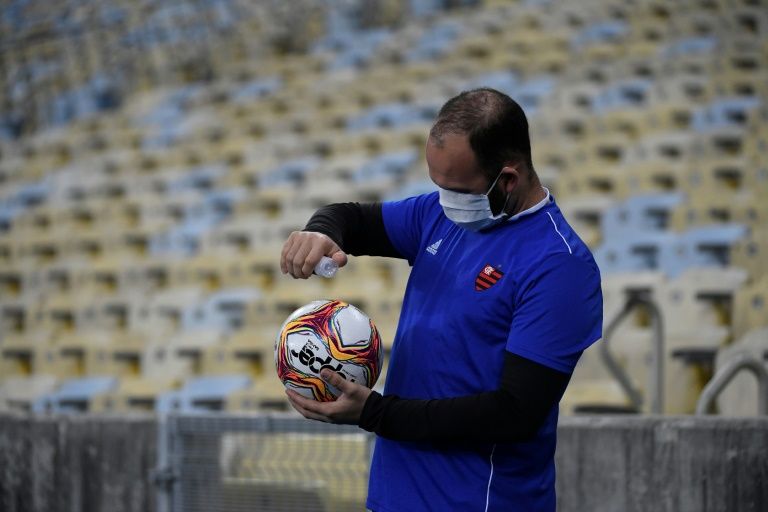 Rio de Janeiro on Friday authorized football fans to return to stadiums from October 4, after a six-month hiatus for the coronavirus pandemic, which continues to batter Brazil.

"Rio city hall announces the return of fans to stadiums," the city said in a statement.

"They will be required to wear protective masks and undergo temperature checks at the entrance. Ticket sales will be online to avoid crowds."

The decision still needs a green light from the Brazilian Football Confederation (CBF).

Rio authorities had initially announced in June they would allow fans back into stadiums from July 10, but quickly backtracked as the pandemic surged.

Mayor Marcelo Crivella said the city would allow up to 20,000 fans at the first match, to be played at the legendary Maracana stadium between Flamengo and Athletico Paranaense.

He said he hoped that would help reduce crowds at the city's iconic beaches, where the authorities have struggled to enforce a ban.

"We're going to call on the CBF to make Maracana stadium an alternative to the beach. Today, perhaps the biggest problem Rio faces are the big crowds of people with no masks at the beach," he told journalists.

The attendance figure, one-third of the venue's capacity, is high compared to what authorities elsewhere in the world have allowed for the first post-lockdown matches with fans — 5,000 in France, 2,500 in Britain, 300 in Germany, for example.

It is on a par with what the NFL's Dallas Cowboys allow at games — but with their stadium only one-fourth full.

Brazil has the second-highest death toll in the pandemic, after the United States, with nearly 136,000 people killed.

Rio de Janeiro state is among the areas hit hardest. If it were a country, it would have the world's second-highest mortality rate from the disease, at 102 deaths per 100,000 inhabitants.