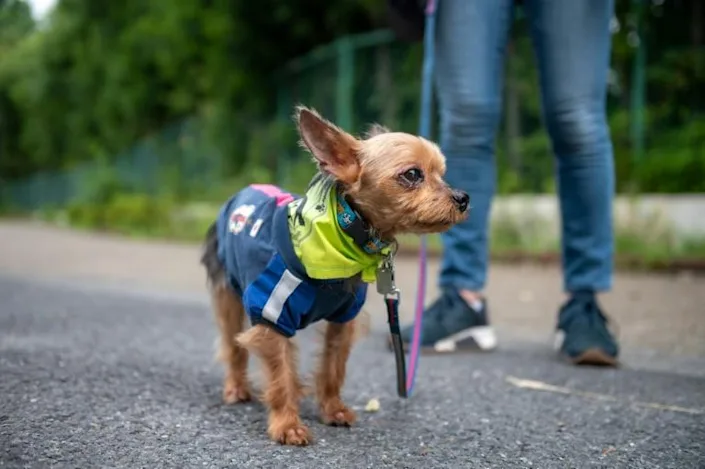 It's a neighborhood watch with a difference. A clean-nosed crew, sniffing out trouble and keeping the streets safe for school kids: meet the pups of Tokyo's real-life Paw Patrol.

They might not have the gadgets and gear of their beloved cartoon counterparts, but the dogs of the Wan-Wan (bow-wow) Patrol are firm favourites in Tokyo's Karasuyama neighbourhood.

Twelve-year-old Yurika Igarashi counts on seeing Sakura, a fluffy toy poodle, when she's on her way home from school.

Sakura is one of 150 pups who form the Wan-Wan Patrol, a program that enlists dogs and their owners to turn their daily walks into a neighbourhood watch, monitoring children, looking out for residents, and helping deter crime.

The Karasuyama program is one of the oldest such community initiatives in Japan and was founded by a local police officer.

"Individual owners walk whenever they can and have their dog wear the same scarf," said Keiko Shimizu, the patrol's current leader.

Clearly marked canines patrolling the streets means "we can help make the neighbourhood less prone to crime," she added.

Many of the dog owners are parents of current and former students of the local school, but others just participate in the community watch as residents.

On one recent morning, five pooches in Wan-Wan Patrol's lime-green neckerchiefs wagged their tails as they accompanied children going to elementary school.

Pu, a 17-year-old shih tzu, is one of the oldest members of the patrol and can no longer walk by herself. But she proudly participates from the comfort of a doggy stroller pushed by her owner.

"The program helps us get to know each other and become good neighbours, and I feel this place stays safe that way," said Michiko Takeuchi, owner of poodle and Maltese mix Kojiro, and mother to a local schoolboy.

And the patrol isn't just for show.

"We had a member who found an elderly person who had passed away alone," patrol leader Shimizu told AFP.

"They realised by noticing a room light still on in the morning. We walk at around the same hours on the same route everyday, so it's easier for us to notice if there is something unusual."

Japan has a reputation as one of the world's safest countries, with very low rates of violent crime.

But there are occasional tragedies, including a devastating accident last month east of Tokyo in which a drunk driver crashed his truck into a group of schoolchildren, killing two.

"Parents appreciate that many people in the neighbourhood care and make sure the environment is safe, especially these days when we hear a lot of reports about crimes involving children," he told AFP.

"I'm sure that children can play carefree outside of school and anywhere in the neighbourhood, because they know many adults keep their eyes on their safety," Ameie added.

For young Igarashi, the cuddly canines are a reliable source of comfort.

"Of course, it's fun to walk with the dogs, but I also feel protected by them."