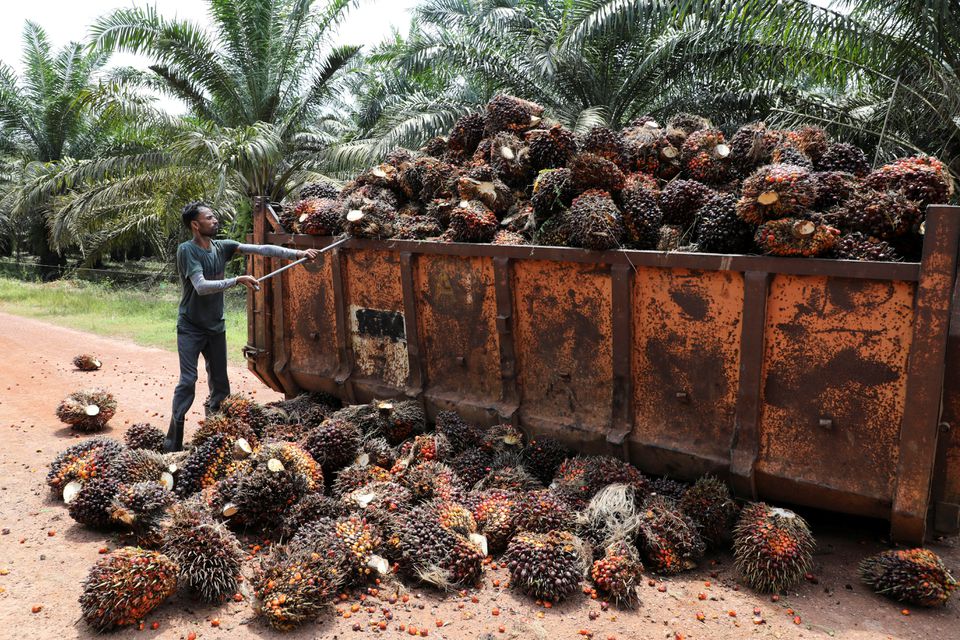 In a sprawling oil palm plantation in the Malaysian state of Perak, watermelon seedlings are sprouting from freshly ploughed earth between palm saplings while rented cows graze in overgrown areas of the estate.

A coronavirus pandemic-induced labour crunch has forced managers of the 2,000-hectare estate in Slim River to find creative ways to upkeep their fields, even as prices of the world's most consumed edible oil are near record highs.

"It is easier to pull out your own teeth than to get new workers now," said estate manager Ravi, who gave his first name only. "I can't find the workers to maintain the fields."

Malaysia, the world's second-largest producer of palm oil, is facing a perfect storm of production headwinds that will likely drag global stocks to their lowest level in five years.

In a sprawling oil palm plantation in the Malaysian state of Perak, watermelon seedlings are sprouting from freshly ploughed earth between palm saplings while rented cows graze in overgrown areas of the estate.

A coronavirus pandemic-induced labour crunch has forced managers of the 2,000-hectare estate in Slim River to find creative ways to upkeep their fields, even as prices of the world's most consumed edible oil are near record highs.

"It is easier to pull out your own teeth than to get new workers now," said estate manager Ravi, who gave his first name only. "I can't find the workers to maintain the fields."

Malaysia, the world's second-largest producer of palm oil, is facing a perfect storm of production headwinds that will likely drag global stocks to their lowest level in five years.

The FAO's global edible oils index is up 91% since last June, and is expected to climb further as economies reopen following COVID-19 lockdowns, boosting food and fuel consumption of edible oils.

But producers have been battling a range of impediments, including labour shortages, heatwaves and vermin infestation, that is driving collective stocks of the world's most consumed edible oils - palm, soybean, canola (rapeseed) and sunflowerseed - to their lowest levels in a decade.

In Malaysia, which accounts for around 33% of global palm oil exports, the average yield of palm fruit bunches in Jan-June fell to 7.15 tonnes per hectare from 7.85 a year ago. Malaysian Palm Oil Board data shows a drop in average crude palm oil yields to 1.41 tonnes per hectare, from 1.56 tonnes over the same period last year.

Many plantations were harvesting with two-thirds or less of the required workforce, after government coronavirus restrictions cut off the usual supply of migrant workers from Indonesia and South Asia.

More than half a dozen plantation owners interviewed by Reuters said the lack of workers had forced them to extend their harvesting window from 14 days to as many as 40 days, a change that compromises the quality of the fruit and risks the loss of some parts of the fruit bunches.

"It is especially bad in Sarawak. Some companies are seeing production falling by 50% because of the shortage of harvesters," said a plantation manager, who spoke on condition of anonymity because he was not authorised to speak to the media.

The Slim River estate has delayed replanting and shut its nursery for the first time in 20 years to redeploy workers for harvesting.

Another plantation manager, named Chew, said he was forced to increase wages by 10% to retain workers.

"It has resulted in an environment that is good for rats to nest, feed and breed and natural predators cannot catch up," said Andrew Cheng Mui Fah, a plantation official in Sarawak.

At Slim River, Ravi said around a quarter of the estate was facing a bagworm infestation that "will skeletonise the leaves and cause small (fruit) bunch formation."

He was referring to the larvae of the bagworm moth that grow and feed on trees.

Neighbouring Indonesia, the world's largest producer of palm oil, does not have the same labour shortage issues and output is expected to rise this year as more area has been planted to palm.

However, operations at palm oil mills, where the palm fruit is converted into crude palm oil, have been impacted by COVID-19 restrictions, said Dorab Mistry, director of Indian consumer goods company and major consumer Godrej International.

"Shutting down of palm oil mills right across the length and breadth of Malaysia (and) Indonesia has been a huge dampener on the production side," he said at the annual U.S. Soy Export Council conference on Aug 25.

Total 2021 output from Indonesia and Malaysia, which together account for roughly 90% of world palm oil, was estimated at 66.2 million tonnes, according to Refinitiv Commodities Research published on Aug. 4.

That is about flat compared with 2020, but analysts said downward revisions are likely if labour shortages and pest infestations worsen.

Meanwhile, farmers in western Canada planted canola into some of the driest soils in a century this spring, sending canola futures to all-time highs in early May.

A July heatwave then scorched crops throughout the Canadian Prairies, leading the U.S. Department of Agriculture (USDA) to slash its estimate of canola output by 4.2 million tonnes to 16 million tonnes, the lowest since the 2012-13 season.

"We haven't had much rain to speak of and the crop is withering," said Jack Froese, who has farmed canola near Winkler, Manitoba, for nearly 50 years.

Froese expects a yield per acre of just a quarter of last year's level: "It's very disheartening."

U.S. soybeans have also been sapped by drought, with the USDA lowering its production forecast by 1.8 million tonnes in August from the month prior.

That is expected to cut U.S. soybean oil stocks to eight year lows and U.S. soyoil exports to decade lows.

"We're looking at an average crop because we were lucky enough to have some subsoil moisture," said Jared Hagert from his North Dakota farm. "But you don't have to go too far west of here to get into some really rough crops."

In some good news for buyers, Brazil's soybean crop is expected to hit a record 144.06 million tonnes in the 2020/21 season, driven by a 4% rise in the area planted to the crop, agribusiness consultancy Datagro estimated.

Ukraine, the top sunflower seed producer according to the USDA, is expected to lift output by 18% from a 2020 drought-hit harvest and oil exports are forecast to rise to 6.35 million tonnes from 5.38 million last season, according to its agriculture ministry.

Still, the outlook for edible oils production overall remains poor and stocks are likely to tighten further, leaving the markets tight well into next year and adding to inflationary pressures, according to some analysts.

In Malaysia, worsening COVID-19 outbreaks will leave plantations starved of workers through the rest of the peak palm production window.

"We are expecting lower oil content in Canada's canola crop due to the drought," he said. "The supply tightness in vegetable oil is expected to continue well into 2022."

The pressure on stocks is already feeding through to consumer prices and the upward trend is expected to continue, especially as refiners lift prices to cover the surge in raw material costs.

Singapore-based Wilmar International said a time lag between the surge in raw material costs and consumer price rises it imposed in the first half of the year had negatively impacted margins.

Mewah Group, one of the largest refineries in the region, said average sale prices for its bulk goods and consumer packs rose almost 54% and 24% respectively in the first half from a year ago.

"Everyone along the supply chain is absorbing some of the higher costs," said Oscar Tjakra, a senior analyst at food and agribusiness research at Rabobank. "The cost push should continue next year."

With global consumers already facing general economic uncertainty due to the coronavirus pandemic, further increases in edible oil prices will take a toll on many livelihoods due the inelastic nature of food demand.

Several countries including Nigeria, Egypt, Turkey and The Philippines have all recorded big jumps in food inflation in recent months. The price pressure may continue as higher edible oil costs are passed on by suppliers, leaving consumers with little choice but to pay up for the staple.

"Even in poorer regions, such as Sub-Saharan Africa, where consumers suffer greatly from high prices, consumption has only declined very marginally," said Julian McGill, head of South East Asia at LMC International.

"There is simply not much flexibility in food use of vegetable oils."