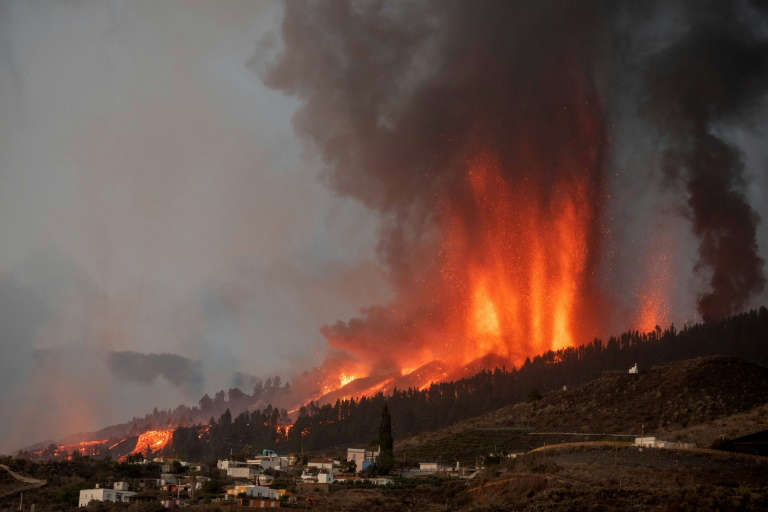 A surge of lava destroyed around 100 homes on Spain's Canary Islands a day after a volcano erupted, forcing 5,500 people to leave the area, local authorities said on Monday.

The Cumbre Vieja erupted on Sunday afternoon, sending vast plumes of thick black smoke into the sky and belching molten lava that oozed down the mountainside on the island of La Palma.

"We haven't had any loss of human life which is the best news," said Angel Victor Torres, regional head of the Atlantic archipelago, which lies off the coast of Morocco.

According to Involcan, the Canary Islands' volcanology institute, the lava flows were moving at about 700 metres per hour, and had a temperature of nearly 1,000 degrees Celsius (1,830 degrees Fahrenheit).

Experts expect the lava to reach the coast at around 8:00 pm.

The eruption on this island of some 85,000 people, the first in 50 years, has caused significant damage with "around 100 homes destroyed", said Lorena Hernandez Labrador, a councillor in Los Llanos de Ariadne which lies northwest of the volcano.

Dramatic images on social media showed huge rivers of slow-moving lava creeping down the mountainside, pockets of flame erupting as it consumed trees and surged over trees and buildings caught in its path.

"This tongue of lava is engulfing everything in its path. It's tragic to see how many homes have just gone up in smoke," he told Spain's public television.

There was huge anguish among the thousands of people evacuated from their homes, with many wondering if they would have anything to go back to.

'You have three minutes'

"Right now, we're watching the news and the lava is 700 metres from our home. I'm really worried because I don't know what's going to happen to it," Angie Chaux, 27, who left with her husband and three-year-old son, told AFP.

"The police gave us three minutes to get our things. It was all very fast."

La Cumbre Vieja straddles a ridge in the south of La Palma, which is one of the most western of the seven islands in the archipelago.

Experts had been keeping a close watch on the volcano after observing a recent upsurge in seismic activity and magma displacements.

An "earthquake swarm" -- a sequence of seismic events occurring over a short period -- began on September 11.

Since then, there have been tens of thousands of tremors, the strongest with a magnitude of nearly four, Involcan said.

The last eruption on La Palma was in 1971 when another part of the same volcanic range -- a vent known as Tenegia -- erupted on the southern side of the island.

Yahaira Garcia, 34, decided to leave her home in the northwestern foothills of the volcano, just before the eruption occurred after a "really terrible night" of continuous quakes.

"My house shook so much it felt like it was going to collapse," she told AFP, saying she had rushed over to her parents' house to help them get out.

Although she was safe, the worry was making sleep impossible.

"Now they're saying the volcano could continue erupting for three months... we don't know when it will settle down again."

Volcanology expert Stavros Meletlidis from Spain's National Geographic Institute said it was too early to say.

"There are volcanoes in the Canary Islands that have erupted for days and others that have continued for several years," he told Spain's public television.

"We are following the volcano's activity very closely."

Prime Minister Pedro Sanchez, who flew into La Palma on Sunday after cancelling a trip to New York for the UN General Assembly, said the priority was "to ensure people were safe".

"The volcano is still active," he warned, predicting there would be "some very long days ahead," he told a news conference.