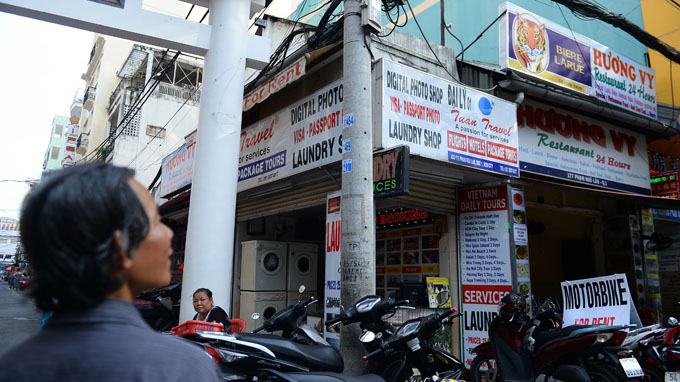 The Ho Chi Minh City Department of Culture, Sports and Tourism on August 6 held a meeting with authorities from eight districts to step up control over the alarmingly common shop signs that feature only foreign languages, or signs where Vietnamese is not the focus.

Over recent years major tourism cities and attractions have seen a boom in shop signs in only foreign languages, such as English, Chinese, Korean and Japanese.

For instance, shop signs in Russian abound in Nha Trang, as the city is usually packed with Russian tourists.

Many local shops and service providers have long displayed signs which feature foreign words only, or both Vietnamese and foreign languages, but the Vietnamese words are dominated by the foreign ones in size, color and position.

A number of shops or restaurants located in the Chinese, Japanese or Korean areas of cities are owned by foreign nationals and mostly, or exclusively, receive clients of their nationality. They hang signs featuring only their language.

Signs on streets where few foreigners live or frequent are also often written in English, which baffles many locals. Owners say that writing signs in foreign languages is cool and trendy.

Such signs are a breach of the Advertisement Law and such an abuse of foreign languages on writing shop signs has created a negative local reaction, and reflects a lack of respect for the national tongue and culture, the culture department pointed out.

The Advertisement Law, launched last year, stipulates that advertising content, whether spoken or written, must be in Vietnamese. Foreign languages can only be adopted when representing foreign brands, trademarks, proper names or internationalized words which can’t be replaced with Vietnamese. In such cases, the signs must use both Vietnamese and a foreign language, and the foreign words must be no less than three-fourths of the Vietnamese words’ font size, and placed beneath the Vietnamese words.

The law also noted that established names or trademarks like Panasonic aren’t required to be translated into Vietnamese. The shop owners are only required to inform local customers in Vietnamese of what kinds of goods they sell.

Participants at the August 6 meeting included officials from eight districts, namely the downtown districts of 1 and 3, Districts 5, 6, 7, 11, and Tan Binh and Binh Thanh, where there is a high concentration of foreigners, and most signs violate the law.

Most sign violations are found on such streets as Dong Khoi, Thi Sach, Hai Ba Trung, the Western backpackers’ quarter on De Tham and Pham Ngu Lao streets, the Japanese quarter on Le Thanh Ton and Ngo Van Nam, the high-end Phu My Hung residential area in District 7, and the areas in Districts 5 and 6 packed with long-standing Chinese settlers.

However, only recently have the cultural officials and district authorities actually sat down to work on measures to cope with the alarmingly common foreign language shop signs.

On August 27, the department instructed the districts to complete tackling sign violations by October 31 by reprimanding, requesting sign modifications, imposing fines from VND3-5 million (up to US$241) and compulsory removal of the violating signs.

However, at the meeting, several district authorities complained that inspections and fines are quite difficult to implement, as the owners are usually absent.

Also, many restaurants owned by foreigners are registered under their Vietnamese acquaintances’ names, and they shift the blame between one another.

Locals agree to pay fines but refuse to modify the sign content, as they believe such signs are feng shui-friendly, or modifications would be expensive.

Nguyen Van Minh, deputy head of the department, said his force will tighten control over the use of foreign languages on shop signs as soon as the owners apply for business permits, and work closely with local police and the media to make sure shop owners can’t evade responsibility. Compulsory sign removal will also be imposed if necessary.

Other content, such as menus and banners will also be inspected for any improper use of foreign languages or price listing in foreign currencies.