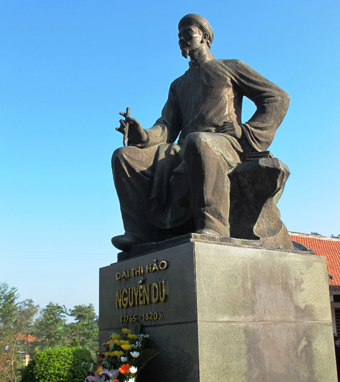 According to Nguyen Thanh Son, Deputy Foreign Minister, who is also Chairman of the Vietnam National UNESCO Commission, the recognition was determined according to the voting rules, which are outlined in the UNESCO Executive Board resolution 191/EX32.

The resolution added that Nguyen Du and other celebrities will be honored in 2014 and 2015.

To be eligible, the candidates also satisfy the year interval of 50 years regarding birthday or death anniversary. Nguyen Du will have his 250th birthday celebrated next year.

A host of activities to pay homage to the prominent poet and celebrate the recognition will be held in Vietnam and several other UNESCO member countries during 2014 and 2015.

Nguyen Du (1766-1820), a revered Vietnamese poet who is widely known for his hallmark “Truyen Kieu” (The Tale of Kieu), was recognized by the World Peace Council as one of the world’s cultural celebrities in 1965.

He was born to a noble mandarin family under the later Le dynasty and he himself became a mandarin, who was dedicated to listening to commoners’ voices and helping them, under the Nguyen dynasty (1802-1945).

His most notable poetic work is “Truyen Kieu” in the Nom language, the first Vietnamese novel featuring over 3,200 lines written in the Vietnamese 6/8 verse.

The masterpiece has been translated into over 20 languages including French, Russian, English, Chinese, and most recently Korean and is highly appreciated for its creativity, independent thinking, and promotion of Vietnamese culture.