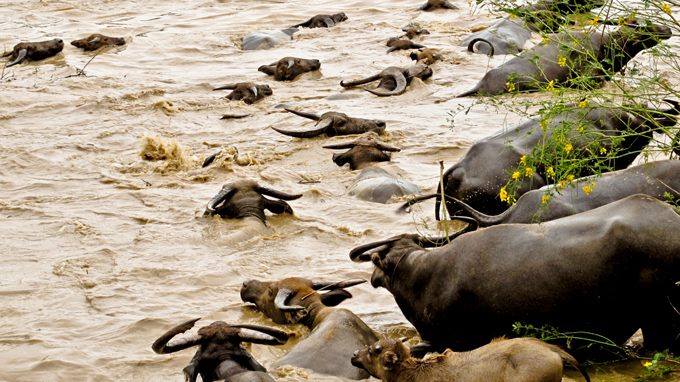 The cowboys of southern Vietnam

Buffalo, once a valuable asset to local farmers, have been replaced by machinery in modern farming. However, the practice of “len trau”, or herding buffalo to high areas in search of grass during the three-month flooding season in the Mekong Delta, will never become a thing of the past.

For hundreds of years, the buffalo has been a valuable asset, efficient working partner, and long-standing friend to local farmers, Farmers highly value their buffalo, take meticulous care of them, and forge intimate bonds with the animals. These days, since the local agriculture sector has been dramatically modernized with high-end machinery and the country is now among the world’s top rice exporters, the number of buffalo may drop, but their bonds with and value to their owners remains unchanged.

“Len,” which means “freedom” in Khmer, is the act of taking buffalo to hills or high ground during the flooding season. During these three or four months, as the paddies are inundated with water, buffalo have little grass to graze on, which leaves them emaciated and frail after toiling hard all year. Thus for hundreds of years, farmers have roamed as far as a hundred kilometers from their farms for months with their beloved animals to seek grassy fields for their food and dry ground for them to sleep on.

Each year, dozens of farmers gather their cattle, which can amount to hundreds of animals, and roam from place to place together. The farmers live together with their buffalo during that time. In some provinces, buffalo farmers leave them roaming and grazing freely by themselves. The farmers leave and return three or four months later to take their buffalo home once the flooding season has ended.

Dwindling but not extinct

To create the realistic setting for his 2005 film “Mua len trau” (Buffalo boy), which earned several international prizes, expat Vietnamese director Nguyen Vo Nghiem Minh travelled across the Mekong Delta on the lookout for a large herd of buffalo during the herding season. Failing to find a large herd, he had to combine several smaller groups of buffalo for his film.

Many seasoned farmers lament that the practice, which later became a job for local youths and even kids, has died out.

Luckily, this isn’t exactly the case. At the Thuong Phuoc border gate with Cambodia, farmers still retain and cherish the practice.

“Fewer farmers may perform the ritual, but it will never die out in a hundred years. This year, as the floodwater rises quickly, several farmers aren’t able to take their buffalo here. However, many farmers will still make the journey, and there will be some hundreds of buffalo in total. ” said Nam Di, a veteran of the job.

Di and many of his fellow herders have performed the practice for 50 years or so. Many kids as young as 10 or 12 years of age have up to five or six years’ experience in the job. Tasked with roaming herds of four or five buffalo, the kids are adept in their job, taking good care of the animals, which are worth some VND30 or 40 million (up to US$1,887) each, such as hanging mosquito nets for the buffalo to sleep under and burning straw to keep them warm and mosquitoes at bay. Constantly on the move, most of these kids don’t have proper schooling and aren’t as interested in their education as they are in buffalo herding.

“We love the buffalo even more than our wives. We may get bored with our wives after a few days, but we’re always excited while roaming with the buffalo for months on end,” joked Ba Thien, a local farmer with 20 years’ experience in the job.

60-year-old Nguyen Thi Em, informally named Ut Em, is the only woman among the herders. She has tended to the buffalo and performed the practice since she was five years old. The job was passed down to her from her grandfather and father.

A single woman, she gives all her love to the animals, having named them and learned their individual traits and habits as if they were her children.

“If you don’t love buffalo, you shouldn’t take this job. For me, buffalo are my work and family. I’ve never hired someone else to do the job for me; I always roam with my buffalo no matter how far they must go,” shared Em.