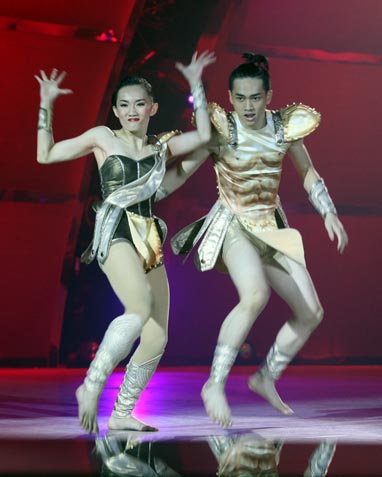 Tuoi Tre offers a look back at the most high-profile events in local showbiz, art, and publishing during 2013.

Amidst the country’s economic malaise—which means lower profits for show managers and singers—shows and albums, including vinyl records, are still launched on a regular basis. However, the shows have been of average quality, with only a few of artistic note, including the “In The Spotlight” series, Tung Duong’s “Doc dao” (The Sole Path), and expat Vietnamese singer Bang Kieu’s “Impression in Vietnam” shows.

The few acclaimed shows all took place in Hanoi, where permits are licensed more easily and tickets fetch higher prices than in Ho Chi Minh City.

Several local singers were involved in scandals during 2013. Seasoned singer Siu Black faced crippling debts and debt collectors while top singer My Tam allegedly requested US$6,000 for a single song at the Danang International Fireworks Competition in late April, which sparked public outcry and questioning of how much top-notch singers earn and pay in income tax.

Several female singers, such as Ngan Khanh, also accidentally showed their breast while performing onstage, but many consider the incidents ploys to gain public attention.

In mid 2013, Nguyen Anh, a 73-year-old composer who has always kept a low profile and led a scandal-free lifestyle, criticized several leading pop singers, including Thanh Lam, My Linh, Dam Vinh Hung, My Tam, and Ho Ngoc Ha in an interview with a local newswire.

Dam Vinh Hung reacted to the composer’s criticisms the most. On his personal page, Hung called composer Anh, who he was previously close with, a hypocrite, and implied that the composer made such critical comments in a misguided attempt to gain attention and fame. Hung later personally apologized to Anh after being blasted by the public for his accusation and professional conduct.

Theater “dormant” for too long

The country’s theater in both HCMC and Hanoi remained quite stagnant in 2013, with few new plays staged. One of the few highlights was the Luu Quang Vu Drama Festival that commemorated the 25th death anniversary of the brilliant poet/playwright, who is known widely for the depth and topicality of his plays.

Another highlight was the Festival of Theater Schools - Asian Pacific Region, which was held in HCMC for the first time in early September. The festival, which drew 120 delegates and students from 15 drama schools, received much critical acclaim from international theater experts.

2013 saw the production of several good-quality, well-loved TV dramas such as “Bi mat tam giac vang” (The secret of the Golden Triangle,” “Ban di chuc bi an” (The mysterious will), and “Nu sat thu” (The lady killer).

However, the popularity of the series is synonymous with the increasing frequency of ads, irritating viewers.

The year also saw the comeback of the 90-minute film genre on major TV channels.

After a few years of success in both artistic and commercial films, 2013 was absent of high-quality artistic films with potential to compete at the Academy Awards.

“Bui doi Cho Lon” (The gangsters in the Cho Lon melting pot), a much-anticipated action movie directed by expat Vietnamese director Charlie Nguyen, was banned from screening as it contains overly gory content. However, only a few days after the ban was issued, the unrevised version of the film was leaked onto the Internet and also made available on pirated DVDs.

TV reality shows: up in number, ploys and scandals

2013 continued to see the boom of TV reality shows. More than ten new shows—all local versions of foreign shows—such as “The Voice Kids,” “The Winner Is,” “The Runway Project,” and “Big Brother” aired on VTV and HTV during the year.

In addition to their appeal and novelty, the shows also caused scandals. “The Voice Kids Vietnam” created quite a stir among netizens and caused public outcry when the authorities became involved. Education authorities of Thanh Hoa province, home to 12-year-old contestant Nguyen Quang Anh, used official documents to call on local officials, teachers, and students to vote for the boy. Consequently, Anh beat his two strong rivals and won the show.

2013- the year of international art fests

Over the year, art enthusiasts across the country had the chance to relish in hundreds of exhibits, film screenings, art performances, and music fests of various genres, ranging from classical music, pop, and rock to jazz, dance, and electronic, all by international artists.

A large number of artists from such countries as Canada, the UK, France, Japan, and the Netherlands gave performances in Vietnam to mark the 40th anniversary of diplomatic ties between Vietnam and their countries. Among them, Japan and France gave the most fascinating performances.

Stripping, breast flaunting on the rise

Recently, several youths, especially girls, have filmed themselves in scanty clothes and titillating positions before posting the clips on the Internet to draw public attention and gain instant fame.

One example is Ba Tung (Ms Tung), whose real name is Le Thi Huyen Anh. She posted clips of herself dancing and showing off her breasts and wrote outrageous statements on her Facebook page. She earned a large number of likes but was also a target of criticism. She was banned from performing nationwide for a certain period of time.

Recently, several youths in provinces including Hanoi, Nam Dinh, Nghe An, Ba Ria Vung Tau, and Khanh Hoa made and released versions of the music clip “Anh khong doi qua” (I don’t want my gifts back). In each of the clips, a sexy young girl walks down the street, taking off her accessories one by one until she is almost naked, wearing only a pair of underwear.

Around eight such clips were made and have recently gone viral on the Internet. A junior version made in Buon Ma Thuot in Dac Lac province in which a little girl strips off her clothes while walking down the street was also released.

During the Dec 12 broadcast on VTV6 of the local version of the reality show “Big Brother,” to shed 18 kg in one of the show’s challenges, several contestants, including women, didn’t hesitate to take off their shirts, trousers, and even bras, wearing only underpants.

“Dung Chet o Chau Phi” (Don’t die in Africa) was published in 2013. It is the sequel to “Xach Ba Lo Len va Di” (Get Your Backpack and Go) by Huyen Chip, or Nguyen Thi Khanh Huyen, in which the author depicts her journey traveling across 25 countries with only US$700 to start with. The second part caused quite a stir on many forums, blogs, newswires, and social networks soon after it was launched in late September. Many readers have raised serious doubts over the reliability of Huyen’s personal accounts in the book, which she called her “travel diary.” An independent counselor even wrote to the Publishing Department, urging that Huyen’s second book be suspended from circulation.

Recently, seven local state-owned publishers simultaneously filed complaints regarding their serious financial difficulties and even mentioned the possibility of bankcruptcy.