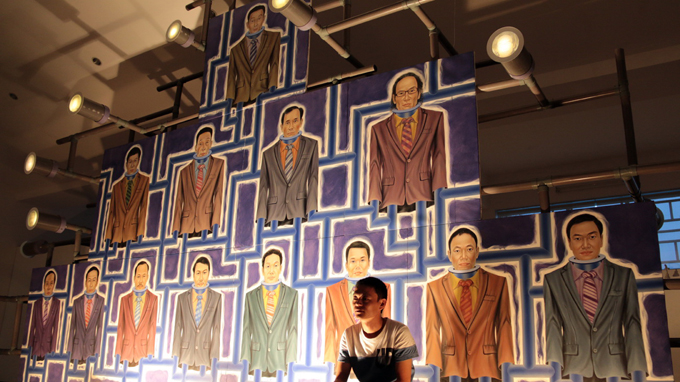 An exhibit featuring art installations which accentuate familial bonds and social connections is ongoing in Hue City in central Vietnam’s Thua Thien Hue Province until June 23, while another is running in Ho Chi Minh City until June 26.

31 portrait paintings combine with photos of the characters depicted in the paintings to create the unique installations which are rich in interactive elements.

While two of them feature the artist’s own family tree, the third depicts his circle of friends and the last one a two-generation family in Hue.

“Whether we’re on the pinnacle of our career or down in the abyss, biological relationships and other social connections still count most. What I’m doing is simply depicting the relations,” Anh shared.

In a similar vein, six artists from the central region are also showcasing their paintings in the exhibit “Gio Lao” (Hot, dry westerly winds), which is running at Tu Do Gallery (53 Ho Tung Mau, District 1) until June 26.

The artists, Ho Van Hung, Nguyen An, Nguyen Van Tung, Tran The Vinh, Truong The Linh and Vu Duy Tan, in their 20s and 30s, have won local awards.

While Linh depicts concerns which twenty-somethings typically have, Vinh mostly paints both wild and tamed horses.