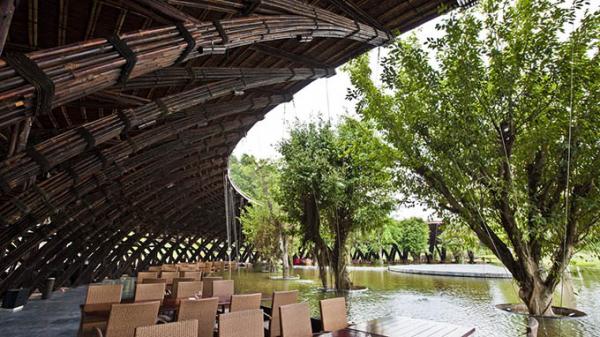 Famed Vietnamese architect Vo Trong Nghia’s  work has earned the “Building of the Year” from the Architects Regional Council of Asia (ARCASIA) 2014 Awards.

Nghia’s “Dailai Bamboo Complex”, located in northern Vietnam’s Vinh Phuc Province, some 50km from Hanoi, was the only project to win the grand prize at the Thursday award-giving ceremony held in Malaysia.

His project also won a Gold in the Public Amenity-Resort Building Category, his third gold medal at this award.

Bamboo Wing and Dai Lai Conference Hall, built in 2009 and 2012 respectively, are both constructed with bamboos in different styles.

Two other Vietnamese architects also won prizes at the award.

Nguyen Hoa Hiep earned “Mention” in the Single Housing for Residential Project and Public Amenity-Resort Building Categories for his architectural works of “The Nest” and “9 Spa”, which are located in central Khanh Hoa Province respectively.

The ARCASIA 2014 Awards received more than 276 submissions, mostly from its 23 members.

He was named ‘the vanguard designer’ by the US Architectural Record, and one of the top 21 architects of the 21st century by the World Architecture News in the same year for his unique bamboo works, including Eco-resort Pavilion in Vietnam and Hill Restaurant in Mexico.

As his latest accolade, The “House for Trees,” designed in collaboration with Masaaki Iwamoto and Kosuke Nishijima from Japan, won the 5th 2014 AR House Awards presented in London in mid June.

Nghia’s design, which beat nearly 200 other architectural works from all over the world in helping deal with urban pollution, comprises five concrete boxes which serve as oversized pots to plant trees on the top.

In March 2014 Nghia was named one of the two young Vietnamese talents to be selected as Young Global Leaders, an annual title conferred by the World Economic Forum.