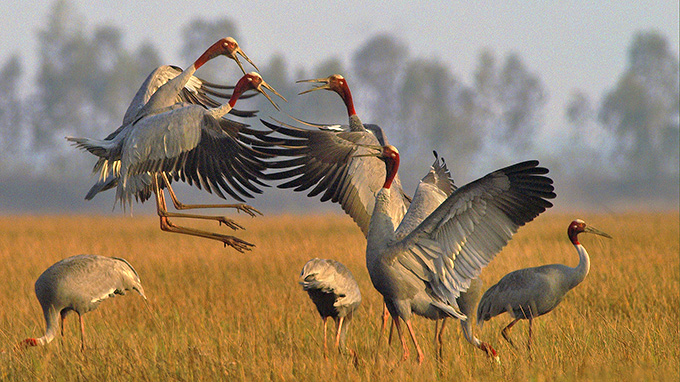 A 60-year-old photographer has dedicated 10 years to capturing the beauty of the various species of birds in Vietnam, including rare and extinct ones.

Tang A Pau shared that since he fell in love with photography 10 years ago, he has led a “double life,” spending four days in Ho Chi Minh City and the rest of the week in the jungle.

He has taken photos of almost 500 of the 850 species of birds found in Vietnam.

His collections of redheaded cranes taken in Kien Giang Province in southern Vietnam are of great scientific significance, as the breed is rarely seen in the area now.

Pau said that mating season for birds is from December to April every year. During the remaining months, migrant birds seek shelter or return to previous areas based solely on instinct.

He revealed that the best time for birding in the jungle is from 5:00 am to 8:30 am, when the birds have just woken up and are singing their first songs to welcome the sun.

They are hungry and busy pecking their wet feathers and are thus not paying attention to what is occurring around them.

“When the sun comes out, they eat a little and all fly into the sky together. I’m stunned by the beauty and can’t decide what to capture with my camera. There are corners where birds flock, creating a splendid spectacle,” Pau said.

What makes Pau’s thousands of photos of birds unique is his focus on the smallest details, such as the color streaks on the birds’ feathers and their sharp eyes.

Pau’s style gives viewers the impression that he is very close to the birds while taking photos of them.

In reality, the closest distance between him and the birds is at least 20m, as birds have a keen sense of smell and eyesight and are fearful of humans.

“I love all wildlife in general. I take photos of birds with a deep respect, as they’re a feeble species with a strong will to survive and are emotional like humans,” Pau explained.

The man remembers the common and scientific names of every species he photographs. He knows their practices and personalities by heart and is well informed of exactly where to look for them in the jungle.

The old man has never submitted any of his thousands of photos to a contest or joined any photography club or association.

Despite the large sums spent on his trips into the jungle over the years, he said he has no wish to become famous or earn money from his photos.