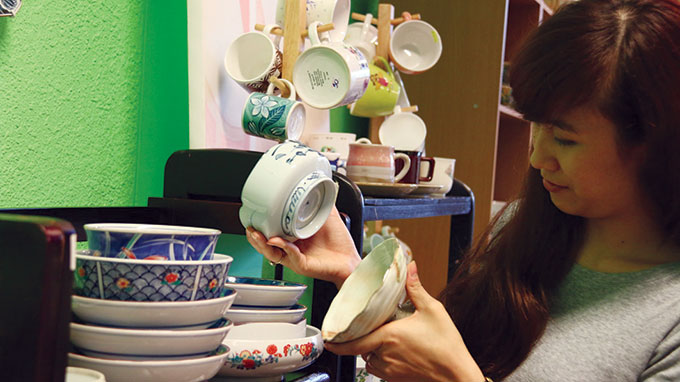 Items of tasteful, exquisite Japanese pottery, which are usually considered a luxury, have been more affordable to Saigonese in the past year.

On weekends, shops offering items of Japanese pottery, most of which are located in Districts 1 and 3, are packed with clients.

Though crammed into small spaces in the family shops, few shoppers show signs of rush as picking among Japanese pottery is considered an elegant, leisurely hobby.

“I’m not selling pottery kitchen ware, instead I’m selling paintings,” states the philosophy of Lac Xoong Shop, at 19B Cao Ba Nha Street, District 1. The shop is filled with pottery items which are arranged in different shapes, sizes, patterns, and glazes.

Tastefully colored items such as bowls, plates and pots of spices are arranged decoratively, which gives the impression of a painting gallery.

New arrivals usually sell out shortly after one or two days.

Captivated by the graceful items, her friends then asked her to buy some for them.

Two years ago, she opened the shop, one of the first few ones trading Japanese pottery in Ho Chi Minh City.

“The items were quite hard to come by then, as few sold them two years ago. Our business was quite good then, sometimes we sold up to VND10 million (US$471) worth of goods a day,” she recalled.

However, as new shops were recently opened and some 20 to 30 sellers also offer online sales of similar products, many of her clients have moved to other shops.

According to Lan Thanh, an artist and Japanese pottery collector, it would take at least VND600,000 (up to $28) if one buys a Noritake dish online and has it shipped to Vietnam.

Meanwhile, one can find a similar item which costs less than half the price at the shops.

According to experts, Japanese pottery is divided into different categories depending on colors, designs, quality of the glaze and the artists’ reputation.

Most of the pottery currently imported into Vietnam is in the intermediate segment and thus fetches affordable prices.

A portion of them are used items or poorly-selling stock, further lowering the prices.

However, not all sellers are knowledgeable about the artworks they are trading.

“I mostly buy the items in kilograms, and fix the prices myself based on my own estimation and limited knowledge. Sometimes I’m not aware of the real value of certain items, until aficionados of Japanese pottery who bought them tell me,” admitted the owner of Tung Phuong Pottery Shop near Ba Chieu Market in Binh Thanh District.

Apart from affordable prices, the appeal of such Japanese pottery shops also lies in their tasteful layout and the cozy, relaxing atmosphere.

At Truoc Nha (In Front of the House) Shop, 57 Nguyen Du Street, District 1, pottery items are arranged on long wooden shelves, which stand out in the warm, yellow bulb light.

Clients can unwind to melodious Japanese songs emitted from an age-old gramophone while selecting their pottery items, or admire the lush plants in a nice Japanese-style garden outside.

Meanwhile, at Nha Co Hai Nguoi (The House with Two People) Shop, 214 Nguyen Van Nguyen Street, District 1, Japanese pottery collectibles are arranged harmoniously in the owner’s kitchen, which allows customers to visualize where to put their purchases in their homes.

“It’s really comforting shopping at these family shops. Sometimes I come here just to relish in the atmosphere without buying anything at all,” remarked 25-year-old Le Ngoc Anh, an office worker.

Many in other provinces and cities including Hanoi and Hoi An in central Quang Nam Province also buy the items online.

Thirty-year-old Ngoc Anh shared that she usually cannot help being attracted to the photos of the items or resist clicking to buy them when browsing the shops’ websites.

Housewives typically buy the pottery in whole sets, while single people and youth are usually after rare collectibles for themselves or as gifts to relatives and friends.

Meanwhile, Japanese pottery aficionados usually seek “brand” products such as Arita, Noritake, Double Phoenix and Hoya, or buy items according to themes such as flowers and landscapes.

Minh Huong, one of the enthusiasts, is infatuated with the pieces to put chopsticks on during meals and can easily spend some million dong on them at one go.

Vinh Hai, 50, one of them, said he has to look carefully as a number of items are designed in Japan but are produced in China.

Le Thu Hien, who has collected Japanese pottery articles for a few years, shared that most of the items sold in Ho Chi Minh City now are imported from Cambodia.

“High-quality pieces with outstanding craftsmanship are quite hard to come by here. It takes lots of time and money to have a decent collection,” she noted.

On a weekend in late July, despite the heavy rain, a class called Over Land in an alley on District 1’s Huynh Khuong Ninh Street was packed with learners.

The learners, who come from different walks of life and age brackets, intently listen to the instructions and practice themselves with all the materials and tools available.

After a few hours, all their hard work paid off and they were delighted at the simple jars and vases they created themselves.

The Japanese man who opened the class blended the traditional Japanese pottery style with the techniques he learned from northern Vietnam’s hallmark Bat Trang pottery village.

Thanh Thu, a staffer at the class, revealed that though the class was launched quite a long time ago, most learners were foreigners.

However, the number of Vietnamese learners has risen in recent times. Local companies also register brief courses for their employees to join for relaxation on weekends.

Most join only one short course at the class to create their own pottery items as gifts for their dear ones, but a number enroll in longer, systematic courses to grasp advanced skills.