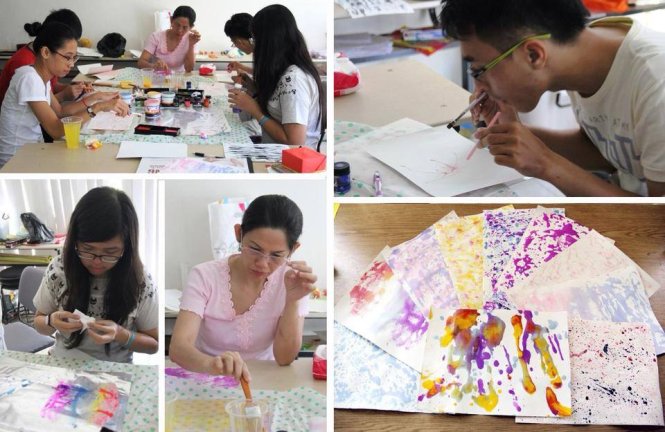 A creativity learning hub in Ho Chi Minh City offers creative art classes where adults can get lost in their childhood world, and children can be themselves.

Art types which recently made their debut in Vietnam, such as sketchnote storytelling, or telling a story with sketches, have appealed greatly to students at the center.

Students come from different walks of life and a wide age bracket, although most are children and young people.

Retirees and family members can also join the classes, though.

More than 10 members of the origami class are attentively applying colors onto paper, instead of buying colored paper available in shops.

Then, he provided general principles on creating new items, before allowing his students time to work out their own creations.

Nhat Anh, a 17-year-old student, revealed that in his previous origami classes, he merely focused on trying to memorize how to create the items, and tended to forget the techniques as soon as he got home.

“It’s quite different here. From the general principles, I’m now able to work on my own creations. I’m also provided with detailed scientific explanations and demonstrations in making pinwheels or mixing colors,” he added.

But Chi (Pencil), or Do Huu Chi, who is in charge of the center’s sketchnote storytelling class, sometimes brings a real dog to class so that his young students can interact with it and sketch what they have observed.

But Chi, who is also a co-founder of the center, found it most challenging to work with adult learners, as adults tend to be hardwired with principles and prejudices.

“I always make it a point to spend three out of nine sessions helping my adult learners relax and start all over with the simplest joys, which include portraying their lives with sketches, just as primitive people did in caves thousands of years ago,” he noted.

Some of the instructors began their job at Toa Tau Hub by sheer chance.

Nguyen Thi Thu Thuy, a doctoral graduate from a university in the U.S., started out as a student of But Chi’s sketchnote storytelling class, the center’s predecessor.

She then joined two other instructors to develop the original class into the current Toa Tau center.

Thuy is now in charge of the presentation storytelling class, which is new to Vietnam.

Similarly, Tuan gave up on his 20-year engineering job, and has focused on studying origami and other art genres ever since.

The center’s teaching staff have devoted considerable time to studying and adopting new creativity art teaching approaches from other countries, particularly from northern Europe and the U.S., and applying them in the Vietnamese context.

The classes’ content and methods are constantly modified and updated, and the instructors and learners keep learning from and inspiring one another.

The center and its founders have also faced immense difficulty, including costs and their parents’ initial doubts over the classes’ role in boosting their children’s creativity and overall performance.

Huong Lan, the parent of a young student at Toa Tau Hub, shared that after just the second clay kneading session, her daughter insisted that she enroll her for the next course.

“After leaving the classes, whether learners can retain the innocent, creative child in them all depends on themselves. But we find the seeds of creativity and passion we have sowed in them well worth our long-term efforts and investment,” shared instructor But Chi.