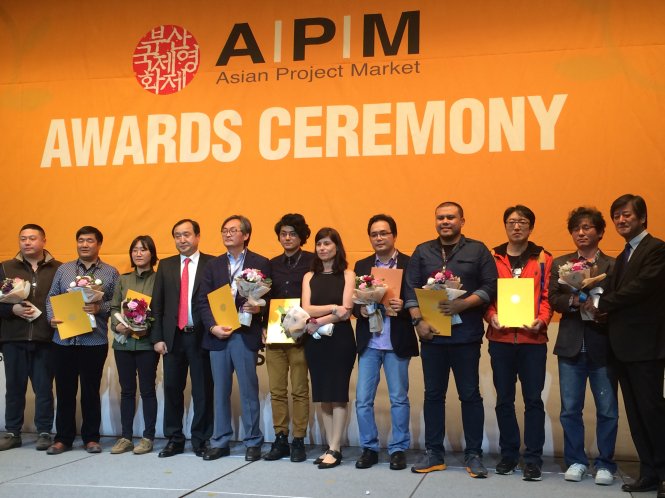 A film project by a Vietnamese director on Wednesday won a prize at the 19th Busan International Film Festival, Asia’s largest, which will close in Busan, South Korea, on Saturday.

Nine prizes were given away in the category, which included 30 projects that had been picked from around 100 candidates the world over to seek production and funding opportunities.

Di told Tuoi Tre (Youth) newspaper that the prize given by APM, which gathers producers, distributors, cinema funds and representatives from major film festivals worldwide, is a golden opportunity for him to kick off his project.

Di joked about the coincidence that his “Tiec Trang Tron” project captured the prize on the 15th day of the Lunar Calendar, when the moon is full.

The film’s plot revolves around a class reunion of middle-aged women on a mid-autumn night.

Di said he will continue to dwell on troubled father-son relationships and generational gaps in “Tiec Trang Tron,” just as he did with his two other films, “Bi, Dung So” (Bi, Don't Be Afraid!) and “Cha, Con Va…” (Big Father, Small Father and Other Stories).

He added that this is the fourth time he has taken part in the Busan festival, which is considered the biggest of its kind in Asia.

Di’s first film, “Bi, Dung So!”, which was screened at the festival in 2007, has won prizes at several international film fests, although it sparked controversy at home over its topic matter and sensitive images. The film was also the first Vietnamese movie to receive €50,000 from the World Cinema Fund (WCF) in 2008.

Di also won €40,000 from the WCF for his second movie, “Cha, Con Va...,” after earning €50,000 from the same foundation for “Dap Canh giua Khong Trung” (Flapping in the Middle of Nowhere), which he produced and won a prize at the 2014 Venice International Film Festival last month.

After the Busan festival, Di will return to France to complete production of “Cha, Con Va…”