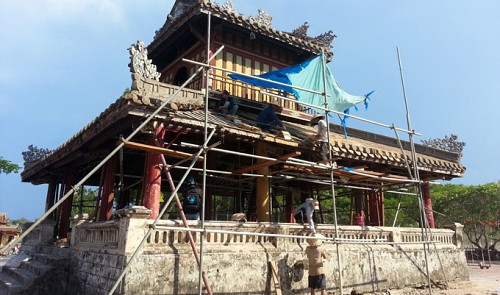 $564k to be spent on restoration of royal edifice in Hue

The Thua Thien- Hue People’s Committee in central Vietnam has approved a US$564,812 restoration project for one of its royal edifices, which is part of the UNESCO-recognized Hue monuments.

The project to restore Phu Van Lau (Pavilion of Edicts), to be undertaken by Hue Monuments Conservation Center, will cost roughly VND12 billion (US$564,812) and take two years to complete.

Located in front of the Royal Palace’s flag pole and built in 1819, Phu Van Lau was where important documents from the Nguyen court were posted.

The edifice has been restored ten times but has sustained serious damage recently.

In mid-May, part of the structure collapsed. This triggered an alarm among the local government and residents, as many of the other 29 relics within the UNESCO-recognized Hue Royal Palace have also sustained irreparable damage.

During the rainy season each year, the Hue Relic Conservation Center dispatches teams to check on and build makeshift support beams for the relics, and then remove the beams when the season ends.

According to the government’s information portal late last month, Hue has received a total of almost $8 million from foreign governments and non-governmental organizations since it was recognized as a World Heritage Site by the UNESCO in 1993.

With this money, the Hue Relic Conservation Center has restored some 132 structures and components of the relics, including the city’s iconic Thien Mu Pagoda, An Dinh Palace, the Nguyen kings’ mausoleums and gateways to the Royal Palace.

Foreign governments and NGOs have also dispatched experts to help with the city’s restoration efforts.

Hue’s monuments received over 1.5 million visits from January to mid-September and earned revenue of VND107.8 billion ($5.07 million), up 10.5% compared to the same period last year, according to the Hue Relic Conservation Center.