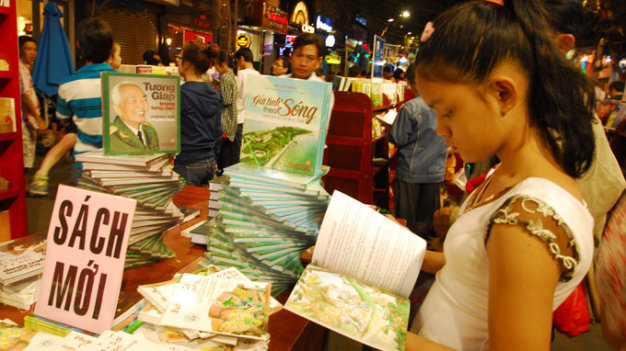 A veteran journalist who is also an author has urged that Ho Chi Minh City dedicate some streets to books where locals and tourists can stroll from store to store and peruse their favorite old and new books.

Le Van Nghia, a seasoned journalist of Tuoi Tre (Youth) newspaper who has also published many volumes and books, shared his own opinions regarding book streets in an article carried in the newspaper on Thursday.

He pointed to Dinh Le Street in Hanoi, which is well known to locals and tourists, including foreigners, as a book street.

The street is less than 200 meters long but it is lined with some 20 book stalls and stores.

The stores here feature both old and new books, which are either copyrighted or pirated versions.

The street is where book enthusiasts can hunt for old, rare, or new books with discounts, Nghia wrote.

It also caters to diverse reading tastes of locals and tourists, who prefer going there to entering a large, air-conditioned bookstore nearby.

The journalist then pondered why such a book street has yet to be formed in Ho Chi Minh City.

He nostalgically recalled that prior to 1975, when Vietnam was reunified, and sometime after the milestone, there used to be some streets in Saigon (the former name of Ho Chi Minh City) where avid readers could find their favorite among stacks of old and new books and magazines in both Vietnamese and foreign languages.

After 1975, Dang Thi Nhu, a 200m street connecting Ky Con and Calmette Streets, was also home to a slew of book stalls.

The stalls were located opposite each another across a pedestrian section.

The city’s downtown area is now home to only two major bookstores, on Le Loi and Nguyen Hue Streets.

According to local newswires, Xuan Thu Bookstore, a major store which was founded in the 1950s and offers a wide variety of books in foreign languages, lost its space on Dong Khoi Street in the downtown area in 2010 to the construction of a luxury trade center.

In July 2011, it reopened at a new location on Tran Hung Dao Street in District 1.

Book distributors and major bookstores occasionally organize book fairs at Le Van Tam Park in District 1 or near the city’s Tet Flower Street on Nguyen Hue, which has drawn notable attention from locals and tourists, the journalist observed.

Tet is a Vietnamese term referring to the Southeast Asian country's Lunar New Year that usually comes in late January or early February.

According to the organizers, a book event in 2013 lured some 850,000 people, while about 57,870 books were sold at another book street festival the same year.

Nghia stressed, however, that apart from the occasional book festivals, book lovers have limited places to indulge in their favorite pastime.

There are now only a few streets such as Nguyen Thi Minh Khai in District 1, Tran Nhan Ton in District 5, and Tran Huy Lieu in Phu Nhuan District, where books are still on sale.

“Why don’t cultural authorities propose that a book street, which is packed with open-door stalls offering old and new books from local publishers, be formed?” he urged.

Nghia suggested the square include a small book street where those interested can choose among the numerous books displayed and join exchanges with authors.

He also expressed hope that the Vietnam Association of Publishers in Ho Chi Minh City will appeal to the local People’s Committee to establish a book street in the downtown area.

Nghia added many major cities in the world set up book streets in their downtown sections which offer new and old books in kiosks or on tables on the sidewalk.