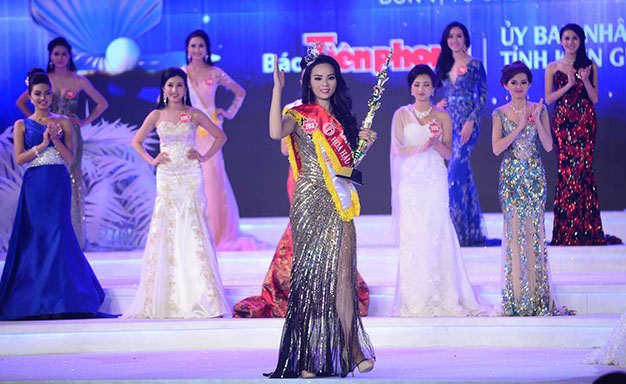 Nguyen Cao Ky Duyen, an 18-year-old woman from the northern province of Nam Dinh, won the crown in the finale taking place on Saturday evening in Phu Quoc Island in the Mekong Delta province of Kien Giang.

Duyen was named in the final moments of the final night of Miss Vietnam 2014, which took place at the outdoor stage at Vinpearl Land on the island district of Kien Giang Province.

Duyen, among the youngest contestants in the 2014 contest, is a first-year student of Hanoi Foreign Trade University.

Before the finale, Nguyen Cao Ky Duyen was among the names being predicted that will emerge as champion of the contest. Duyen has previously drawn public attention with her effective weight loss story, which helped her reduce her weight from 70 kg to 59 kg prior to the contest by undergoing training and strict diets.

She passed the four remaining contestants in the top 5 in the last Q&A session for the answer about the virtues of Vietnamese women in reply to the question "What makes the difference between a Vietnamese girl and other girls from other countries across the globe".

The first runner-up in the national beauty pageant contest was Nguyen Tran Huyen My, a student from the capital city of Hanoi, and the 2nd runner-up was Nguyen Lam Diem Trang from Vinh Long.

The final night of Miss Vietnam 2014 took place for nearly three hours with 38 contestants undergoing ao dai (traditional long dress), swimsuit, and evening gown performances so that the judges could select the top 10.

Then the top 5 were selected to go forward to compete in the Q&A session. The difference of this year's contest was that the organizers had chosen the questions within 10 themes synthesized from 500 questions sent from the public.

As a result, this year's Q&A session became more vibrant with new themes like the role of women in society, idol of youth, the beautiful features of Vietnamese girls, and feelings of the fatherland.

The finale has exploited the theme of the river and island civilization of the pageant’s homeland, especially the image of Phu Quoc Island with lots of potentials.

The stage is designed as a miniature of Phu Quoc island, covered with images of blue sea, white sand, forests, waterfalls, and ocean bed, while the swimsuit of the 38 contestants was also in navy blue to suit the theme of the finale.

The performance of international pop star Kelly Clarkson with her hit songs, such as Because of you and Stronger, rocked the audience and helped elevate the level of the program.

Miss Vietnam is a beauty contest for young women aged 18 to 27 years, with the aim of finding a Vietnamese woman with natural beauty, charm, and friendliness.

The crown for this year contest, worth some VND2.5 billion (US$117,500), was designed and manufactured in three months. It has been recognized by the Vietnam Guinness Book of Records as the biggest crown studded with the highest number of natural pearls of Vietnam.