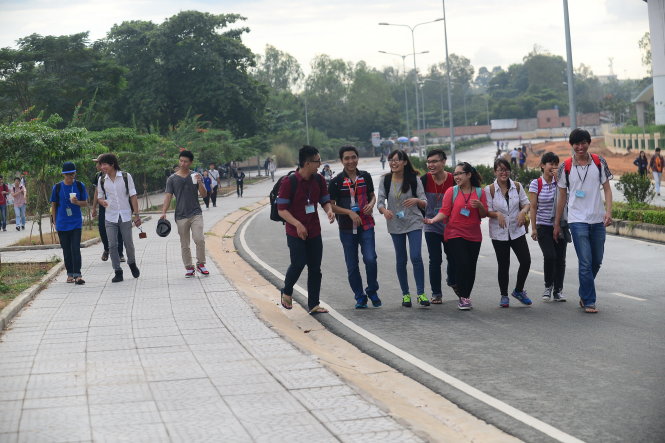 Many Vietnamese students and office workers who are supposed to behave properly to suit their education level find nice habits a luxury.

Tuoi Tre (Youth) newspaper created an online forum which has received articles and comments from readers since last week.

The undesirable habits among these groups of educated people tend to be more sophisticated, several readers said.

Getting mean in office life

N. Vi, a 27-year-old auditor, said she had a tough time when she began working, as she faced countless unkind acts from her colleagues.

“Though a newcomer, my colleagues ‘saved’ all the hardest work for me, claiming I had graduated from university with flying colors. I was always held accountable for blunders, while my voice was hardly listened to in meetings,” she recalled bitterly.

Nguyen Thi Thuy Huong, a lawyer in Ho Chi Minh City, witnessed a seasoned department chief adopting all kinds of ploys, including isolating and defaming, to get rid of a young, capable female colleague who was likely to replace him.

The young colleague was plunged into such a crisis that she eventually quit her job.

Most human resources experts and staff say that such a situation is the norm among many office workers, including those trained abroad.

Two female colleagues, who had both studied abroad, held the same position at the company.

The woman who began working there first kept fabricating stories that the CEO, who was based in another country, hated the newcomer.

This left the latter invariably on edge even though she had great ability. Things did not clear up until the CEO arrived in Vietnam.

To everyone’s astonishment, the wicked woman was later discovered making up similar stories, which drove another newcomer to the point of quitting the job, Hieu added.

Nguyen Huu Quang, director of EXE Studio, shared how miserably one of his female friends suffered as most of her female colleagues envied and isolated her only for her gorgeous looks.

Succumbing to the pressure, she finally quit her job.

“It’s generally assumed office workers are among society’s most highly educated and best-behaving classes in Vietnam. As I observe, however, this does not apply to every office worker,” he noted.

D. Lan, a 30-year-old banker, revealed she once fell into depression as her co-workers, including males, would make fun of her small build, dark complexion, and protruding teeth.

“They would ask me to join their outings at the last minute. But I usually came up first when my male colleagues wished to find someone to crack indecent jokes on. They also purposefully ignored me when it came to selecting women for reception tasks in certain events,” she confided.

“I don’t have a university degree or adequate command of English. When they overuse English words in conversations, I just have a feeling that they are speaking ill of me. They also disregard my advice as they think I’m educationally beneath them,” he said.

According to Dr. Hieu, one of the undesirable habits among office workers is their failure, either intentionally or inadvertently, to separate their personal and work life.

“The use of the Internet for personal purposes such as shopping and surfing social networks is rife, particularly among fresh graduates. Many get addicted and turn to 3G after their Internet connection is stalled by their employers,” Son added.

Many also use the office phones for hour-long conversations for personal purposes. Son noted the habits tend to be most rampant among those working at state-run companies.

P. Anh, 31, head of the information technology department at a company in Binh Duong Province in southern Vietnam, said he often notices his colleagues’ failure to turn off their computers or lights before calling it a day and leaving.

“Many type hard on the computer, mostly when playing games or chatting, while others are taking a nap. I remind them again and again, but not much has changed,” he said with a sigh.

Other unwanted workplace habits include the failure to ensure office hygiene by smoking indoors or bringing in smelly food, taking home office stationery, rummaging through others’ drawers and using personal items without seeking permission, said Phu Quang, a 25-year-old designer.

“The habits do exist in developed countries, but I think they are not as rampant as in Vietnam. Perhaps they make clear distinctions between employers and employees and private and work life, while Vietnamese work environs remain emotionally influenced,” Dr. Hieu pointed out.

The organizer of a famous singer’s live show in November handed out free tickets to students. Though many did not intend to go the show, they still registered for the tickets, which they would then sell to others at a markup.

Academic event organizers lament that if they want their events to be packed, they have to shower participants, mostly students, with promotional gifts.

Students habitually leave the seminars or programs as soon as gifts are given away.

Other annoying habits include not clearing away their portions in dormitory cafeterias, smoking in class or dorm rooms, driving their motorbikes on campus, and littering on campus and even in class.

Many students also take great pride in their ploys to get free electricity, water, and Internet from their landlords.

A senior at a Hanoi university told stories about his roommates and housemates in a block of rooms for rent.

Though each room is equipped with its own water and electricity gauges that monthly bills are calculated on, most of them plug into their landlord’s sockets whenever he is away to cut costs.

Several also stealthily connect electric and Internet wires from the landlord’s house to their rooms for free usage.

They also falsely report the number of tenants in each room and hide in bathrooms to save just a few dollars on garbage collection fees every six months.