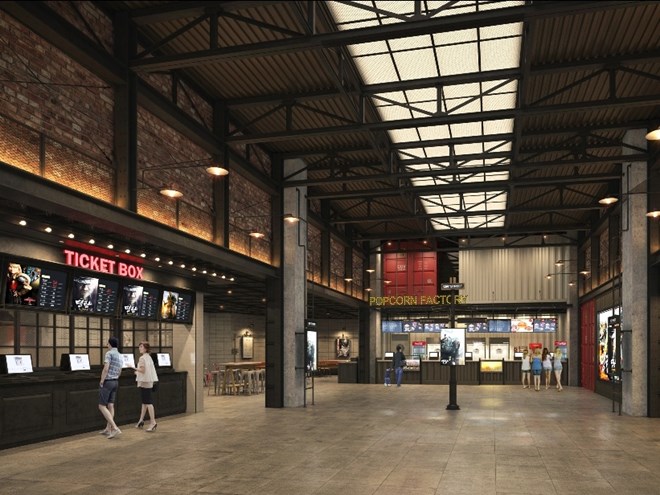 Foreign film distribution and screening companies have overwhelmingly dominated the local market and their operators already began taking up other business opportunities in Vietnam.

Several such companies have launched new cineplexes with increased numbers of theaters and seats in time for Christmas, New Year and especially Tet (Lunar New Year) – the country’s biggest traditional holiday – which kicks off on February 19, 2015.

They have also tried to lure cinema goers by offering discounts on new flicks and showing previously launched films for free.

CJ CGV – the largest multiplex cinema chain in South Korea, which also has branches in China and the United States – has consolidated its dominant position in the Vietnamese film market by opening three new cineplexes this month.

According to a CJ CGV Vietnam representative, the group inaugurated on Tuesday the CGV Big C Dong Nai in Bien Hoa City, some 30 kilometers from Ho Chi Minh City.

Their two other new cinemas, CGV Vincom Ha Long in the northern province of Quang Ninh  and CGV Thao Dien Pearl in Ho Chi Minh City, are slated to come online next Thursday – Christmas Day – and on Saturday next week, respectively.

The screening rooms are equipped with uniquely shaped lounges and eye-catching film posters, allowing young cinema goers to chat and pose for selfies and wefies before show time.

CJ CGV caused quite a stir when it purchased Megastar, Vietnam’s once largest multiplex, in an over US$70 million deal in 2011.

Vietnam was still a limited movie market back then.

At that time, Megastar owned seven multiplexes worth a total of $38 million, which accounted for 60 percent of the country’s box office revenue.

Since the takeover, CJ CGV cinemas have screened more Korean movies alongside a large number of Hollywood pictures.

CJ CGV launched its representative office in Vietnam in the early 2000s.

Tae Sun Jung, head of the representative office of CJ E&M – a subsidiary of CJ Group – told Tuoi Tre (Youth) newspaper in July this year that they are cooperating with local producers in creating films both to make money and help tap into the country’s fledgling yet potential film industry.

The CJ CGV Vietnam representative said the CGV Art House project will be initiated for the first time next year in a bid to provide an impetus for the country’s movie industry. The cinema operator aims to increase the number of cineplexes to 30 by 2017.

Korean group Lotte Cinema has announced the launch of its new Lotte cinema in the Mekong Delta city of Can Tho, which is scheduled for Friday next week.

The new cinema, which boasts five screening halls and 664 seats, will take the group’s total number of cinemas throughout Vietnam to 16, with 69 screening rooms and 10,803 seats.

The group plans to increase the number of cineplexes to 70 in the next five years.

Since the launch of its own multiplexes in Vietnam, every month Lotte Cinema has shown new Korean movies, which usually have simple plot lines and star popular Korean actors and actresses.

CJ and Lotte currently own 30 of the 40 multiplexes nationwide, three-fourths of the “pie” of the Vietnamese film market.

Apart from doing business in cinemas, film production and distribution, both groups have also started offering other services in Vietnam.

While CJ has opened eateries and the bakery chain Tous les Jours, Lotte has launched Lotte Mart, which sells Western and Korean products.