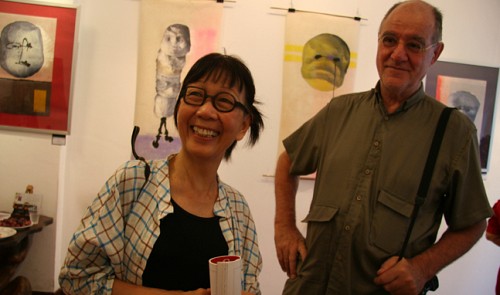 An elderly Vietnamese-Swiss director has just had two of her films shown at an ongoing Taiwanese film festival specially dedicated to Vietnam.

Siu Pham, 66, has made her way to the Shooting Left Asia 14 festival, which is taking place in Taipei, Taiwan, until Sunday.

Shooting Left Asia 14 is a major international cultural event which is sponsored by the Taiwanese government, according to Vietnamplus.

This year’s event, themed “Pres du Vietnam” (Close to Vietnam), is jointly organized by Body Phase Studio, which was founded in 1992 by Wang Mo-lin – Taiwan's influential theater critic – and some Vietnamese film units.

Pham’s two latest film, “Can Phong Cua Me” (Homostratus) and “Suong Mu Tren Dinh Nui” (Fog on the Mountain Peak), were screened on Thursday at the festival.

The director also joined an exchange which followed the screening.

Born in 1946 in Hanoi, Pham studied fine arts, literature, and cinematography from 1963 to 1992 in Vietnam and Geneva.

She left the Southeast Asian country for Switzerland in 1983 and has since organized many art exhibits in the European nation, the U.S., France, and her home country.

The director began her filmmaking career as a scriptwriter and won a prize in scriptwriting at the 2002 Locarno International Film Festival.

Her artistic passion has always been cherished by her 71-year-old Swiss husband, Jean Luc Mello, who is also an artist and filmmaker.

In 2009, while designing costumes for locally prize-winning movie “Ao Lua Ha Dong” (The White Dress Silk) in Vietnam, she had the opportunity to work with the country’s leading cameramen.

Almost two years later, she directed her first film, “Do hay Day” (Here... or There?), which features her husband in a lead role and was shot by the same team of cameramen.

The film competed in the New Current category of the 2011 Busan International Film Festival in South Korea.

“Do hay Day” is an autobiography of a nostalgic elderly Western man, who relishes the rustic culture of a coastal village in central Vietnam.

The film, likened to a contemplative poem about poor, lonesome people amidst the hustle and bustle of Ho Chi Minh City, won the Best Unique Vision award at the 2014 Queens World Film Festival and competed at several other international film fests.

The Vietnamese Swiss went on to make a documentary –“Suong Mu Tren Dinh Nui” – which was filmed in Hoi An City, home to the UNESCO-recognized Hoi An Ancient Town, in central Vietnam.

The film was finished in October this year.

The project, developed by Pham herself, will be produced by Nguyen Hoang Diep – director of the internationally-winning feature film “Flapping in the Middle of Nowhere.”

Diep’s film won the Best Film category at the 2014 Venice Film Festival’s International Critics’ Week, a program for debut films, in September, along with several other international prizes.   Pham and her husband have held a number of art exhibitions displaying paintings and sculptures in Paris, Geneva, and Vietnam.