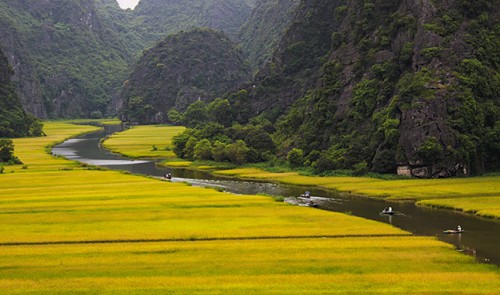 Tuoi Tre News offers readers a review of the 10 most attention-grabbing entertainment, culture and lifestyle events during the year 2014, which is drawing to an end.

The group of 10 below is partly based on a nomination list provided by the Ministry of Culture, Sports, and Tourism.

The Trang An Scenic Landscape Complex in Ninh Binh Province in northern Vietnam was inscribed on the World Heritage List of the United Nations Educational, Scientific and Cultural Organization (UNESCO) during its June 25, 2014 session in Doha, Qatar.

The complex became the country’s first site to be globally acknowledged as a mixed natural and cultural property.

“Vi” and “Giam” folk songs typical of the north-central Vietnamese provinces of Nghe An and Ha Tinh were acknowledged by UNESCO as an Intangible Cultural Heritage on November 27.

The songs focus on key values and virtues including respect for parents, loyalty, care and devotion, and the importance of honesty and a good heart.

On August 8, the Ministry of Culture, Sports, and Tourism issued a document warning against the use of exotic mascots, particularly Chinese-style stone lions, in religious institutions and public agencies.

The warning came as a devastating blow to stone carving villages throughout the country, as few customers are now willing to buy new Chinese-style mascots, and existing statues have been moved out of pagodas, temples and public agencies.

According to the Ministry of Culture, Sports, and Tourism, the total tourism revenue earned this year reached VND230 trillion (US$10.83 billion), up 15 percent compared to last year.

The amount is the highest ever despite the immense difficulties the tourism sector has faced.

Vietnam was listed among the 20 best countries for solo travelers by New York-based travel magazine Travel + Leisure in its September issue.

The list was created based on two concerns for people when they travel alone, namely safety and if the destination is a happy place, according to the magazine.

The Southeast Asian country was then described as one of the “safest, friendliest countries” for “solo adventure” by the magazine. Vietnam was ranked 45th in the Global Peace Index 2014, and 2nd in the Happy Planet Index report in 2012.

6. Music royalties: The fight is on

This year has also seen several hassles regarding copyrights and royalties.

-- Right before a show by Khanh Ly, a much-loved expat Vietnamese singer, in Hanoi on August 2, Vietnamese composer Pho Duc Phuong, director of the Vietnam Center for Protection of Music Copyright (VCPMC), personally went to the performing venue and demanded payments from the organizer for the right to use several songs by eminent late Vietnamese composer Trinh Cong Son in the event.

According to Phuong, Ly’s concert organizer did not sign a contract with the center regarding the copyrights of the songs even though the VCPMC had sent a document on the issue to them 10 days before the show.

He noted that local singer Trinh Vinh Trinh, Son’s younger sister and representative, has assigned the center to protect the composer’s song copyrights since 2009.

The hassle led to the cancelation of the singer’s show slated for October.

Zing MP3 is one of the country’s most popular social networks, where users are allowed to upload their favorite songs.

However, the composer later dropped the court proceedings against VNG after he and the company inked an agreement on the website’s use of his own and his band’s songs.

-- Twenty-year-old singer Son Tung M-TP recently became involved in a purported copyright breach as his latest song, titled “Chac Ai Do Se Ve” (Maybe Someone Will Come Back), bears striking similarity to “Because I Miss You,” a song composed and performed by South Korean singer Jung Yong Hwa.

The Vietnamese Performing Arts Department in late November arrived at a conclusion that the Vietnamese singer’s song did not violate current regulations in Vietnam.

The department’s conclusion came after it had received an email from Kwon Woo Min, a representative of South Korea-based FNC Entertainment, who manages Jung Yong Hwa, who said that they did not consider Tung’s song a copyright infringement.

However, a meeting held in early December ruled that the singer would have to change the beat of his song, which is heavily influenced by “Because I Miss You.”

-- In early October, Venerable Sir Thich Thanh Cuong, the abbot of the Cuong Xa Buddhist pagoda in the northern province of Hai Duong, received a lighter penalty than expected from his Sangha for a video capturing him unboxing an iPhone 6 and photos displaying his extravagant lifestyle that surfaced online in late September.

In the video clip, which went viral on social networks and in Vietnamese media, Venerable Sir Cuong was filmed eagerly unpacking the box of a costly 64GB iPhone 6 at a mobile phone store in the province while wearing his monk outfit.

-- Several pictures leaked on the social networking site on September 21 and 22 showed an unknown woman intimately posing face-to-face with and hugging a young man wearing a pair of jeans, a T-shirt and a hat.

The man was later identified as Venerable Sir Thich Minh Nhut, a monk at Khanh Quang Pagoda in the Mekong Delta city of Can Tho. He was believed to be a member of the pagoda’s supervising board.

Venerable Sir Nhut admitted in early October that the said photos were real amid rumors that they had been edited.

-- Another Buddhist monk in the south-central province of Khanh Hoa hogged headlines after a sex tape and several sensitive photos apparently of him were leaked online in early December.

The monk, referred to as a Venerable Sir and was reportedly the abbot of a pagoda in the provincial resort city of Nha Trang, was then believed to be the man seen naked and making love to a woman in the video and photos.

The provincial Buddhist Sangha on December 10 urged police to verify whether the viral sex tape was of the monk, who is under its management.

National broadcaster Vietnam Television (VTV) confirmed on December 2 that it had stopped airing “Sex and the City” – a hugely popular American sitcom – after broadcasting only five episodes last month.

The station’s representative said that VTV has not made any plans to resume broadcasts.

Debuting on VTV2 – VTV’s education channel – on November 10, the TV series was part of the broadcaster’s 18+ film program.

The premiere broadcast was first slated for November 10 but it was later delayed until November 17, following differing opinions on airing such a sensitive sitcom on the national channel. However, the TV station later decided to stick to its original plan.

Shortly after that, SBS publicly apologized to Vietnamese people for airing the show – “Modern Farmer” – that had sparked fury in Vietnam.

Vietnam Television (VTV) has made repeated blunders in several of its shows this year.

-- The channel on December 21 was fined VND30 million ($1,412) after publicly apologizing to viewers for airing a cartoon deemed to be an offense against teachers, who are highly revered in Vietnamese society, right before Teachers’ Day.

VTV admitted its fault in broadcasting the cartoon “Nhat Xuong Cho Thay” (Clearing Away Bones for the Teacher) one day ahead of Vietnamese Teachers’ Day, November 20, which is an occasion during which students show their respect for and gratitude to their teachers.

-- In late October this year, the broadcaster was also fined VND15 million ($706) for airing the performance of a boyband in an episode of the first Vietnamese season of British reality show “The X Factor.”

In their performance in the semifinal round broadcast on VTV3 on October 12, the four-member F Band donned the Pieu brocade, a traditional scarf which is a cultural symbol of the Thai ethnic group in the northwestern mountains, in the form of a loincloth.

Shortly after the broadcast, outrage erupted on local social networks where many people said the performance offended the Thai ethnic minority's culture.

-- The broadcaster also admitted they made a mistake in not censoring footage of the beheading of a live turtle, so the disturbing image appeared clearly in the 10th episode of the second season of the “Vua Dau Bep – MasterChef Vietnam” cooking show, which aired on September 20.

-- In late April, VTV publicly apologized for another incident on “The X Factor.”

Popular singer Anh Thuy deceived viewers in one of the show’s episodes by dressing up as a poor, scar-riddled coffee attendant and making up a pitiable story.

Thuy, playing a girl with a mask and a woolen hat, successfully aroused mercy and sympathy among many viewers, who were soon frustrated to learn that it was a mere trick.