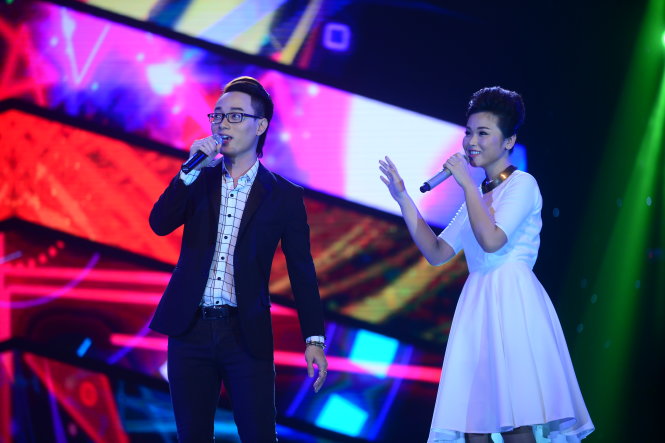 Digital music thrives in Vietnam, but at a price

In today’s Internet age, digital music has gained a preponderance in the music market in Vietnam – just as in other countries – but it remains plagued by poor quality and rampant copyright infringements.

The year 2014 has seen a further explosion of digital music, with many songs enjoying huge popularity.

Young singers such as Son Tung M-TP, Truc Nhan, and Truong Thao Nhi have been catapulted to fame with several online hits.

The organizer handed away prizes to young singers during their award presentation ceremony in Ho Chi Minh City on December 10.

The song also earned Nhan the “Promising Singer” prize of the same awards.

Son Tung M-TP’s songs such as “Em Cua Ngay Hom Qua” (You of Yesterday) would stand a good chance of winning prizes if they had not been removed from Zing Mp3 – one of the country’s most popular music downloading websites – due to alleged copyright violations.

In recent times, these young singers have even transcended the digital music arena to stand on the same stage with their established predecessors, who have organized costly live shows and released well-funded albums.

Questionable quality   Despite the robust growth of digital music, experts and veteran composers remain concerned about its quality.

The technology boom has made it considerably easier for singers/writers to incorporate excerpts or demos widely available on the Internet into their songs.

This has resulted in similar, bland songs which are void of creativity and real emotions and thus easily fall into oblivion following their short-lived popularity.

The young singers’ musical competency is also open to question.

According to composer Quoc An, each Vietnamese musical school has only a few dozen singers who can read musical transcription.

Vietnamese digital music is also rife with hassles regarding copyright and royalties.

In early December 2014, singer/composer Tran Lap, whose real name is Tran Quyet Lap, sued Ho Chi Minh City-based VNG Co., as he found its Zing MP3 website posting and sharing his song – “Duong Den Vinh Quang” (Road to Glory) – without seeking his prior consent. However, the composer later dropped the court proceedings against VNG after he and the company inked an agreement on the website’s use of his own and his band’s songs.

Twenty-year-old singer Son Tung M-TP recently became involved in a purported copyright breach as his latest song, titled “Chac Ai Do Se Ve” (Maybe Someone Will Come Back), bears striking similarity to “Because I Miss You,” a song composed and performed by South Korean singer Jung Yong Hwa.

The Vietnamese Performing Arts Department in late November arrived at a conclusion that the Vietnamese singer’s song did not violate current regulations in Vietnam.

The department’s conclusion came after it received an email from Kwon Woo Min, a representative of South Korea-based FNC Entertainment, who manages Jung Yong Hwa, who said that they did not consider Tung’s song a copyright infringement.

However, a meeting held in early December ruled that the singer would have to change the beat of his song, which is excessively influenced by the Korean song “Because I Miss You.”

Similarly, local singers My Tam and Le Quyen in 2009 and 2012, respectively, submitted a letter to competent agencies accusing a number of local music websites of violating their songs’ copyrights.

Their cases, however, did not go to court as the sides managed to settle the matter with satisfactory compensation.

In August 2014, singer Dang Khoi – director of Viet Giai Tri Co. – also brought Zing MP3 to court for its reported copyright violations of almost 10,000 K-pop songs by some 700 Korean artists which the company is authorized to use in Vietnam.

The Ho Chi Minh City People’s Court is proceeding with the case.

Dam Vinh Hung, dubbed Vietnam’s “pop king,” purportedly became the first artist in the world to launch his album in the form of a South Korean smart media card to better cope with rampant piracy in mid-October.

The singer then introduced his album “Lam Sao Anh Biet?” (How Do I Know?), which was made using South Korea’s Smart Media Card (SMC)/Kihno technology – completely different from a conventional CD or DVD.

SMC/Kihno is expected to replace vinyl records and CDs and DVDs thanks to its compatibility with different kinds of mobile devices, including smartphones, according to Hugh Dao, board chairman of H&Dao Corporation – a local company which is exclusively licensed to use the Korean technology in Vietnam.

The smart card also helps curb piracy and illegal online music listening and downloading, as each can only be used on a certain device with a specific ID, Dao explained.