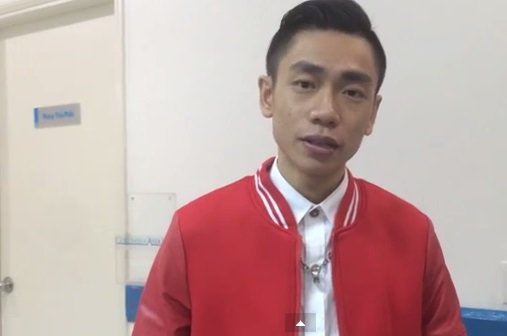 National broadcaster Vietnam Television (VTV) has admitted it is partly to blame for an incident in the “Vietnam’s Got Talent” semifinal on Sunday during which a contestant mistakenly drank from a glass of acid on performing a magic stunt, while rumor has it that it was a mere ploy to draw attention to the program.

>>An audio version of the story is available here

The semi night was on air as part of the third Vietnamese season of the “Got Talent” series format that was created by Simon Cowell in the United Kingdom.

During the hair-raising magic stunt, Phat was supposed to single out a small glass of diluted colorless, odorless acid, which was shuffled by a show juror among four other glasses of water.

Unfortunately, the young man made a disastrously wrong choice and drank from the glass of acid after drinking from the first glass of water.

As soon as he realized his mistake, he instantly spit the acid out and covered his mouth with his hand.

The acid used during his magic stunt was diluted sulfuric acid (H2SO4), the organizer said.

Nguyen Ha Nam, a VTV spokesperson, told Tuoi Tre (Youth) newspaper on Monday that the broadcaster is partially to blame for the incident.

An official from the Performing Arts Department said “Vietnam’s Got Talent” is jointly organized by VTV and BHD, a local entertainment company, and is not under its authority.

On Monday afternoon, BHD sent a video clip to the press which shows a doctor asserting Phat suffers only minor burns in his mouth and tongue.

The doctor added it would take the man between a week and 10 days to fully recover as long as Phat takes medication and avoids sizzling food.

Nearly 50 Tuoi Tre readers and netizens have voiced concerns over whether such risky stunts should be broadcast on a national television channel.

Several suggested eliminating such hazardous performances from the show for fear that the lethal weapons or toxic substance the performers use may pose danger to the contestants themselves.

Even the jury and audiences may ‘fall victim’ to the stunts one day, they said, adding that such scenes may encourage viewers, particularly children, to try them at home.

Meanwhile, suspicion has surfaced online that the incident may be Phat’s sheer ploy to gain attention and win votes.

Veteran actor Thanh Loc, one of the show’s jurors, and Van Hugo, its host, have sent letters to a local magazine to elaborate on the incident.

The two suspect that Phat purposely sipped a small amount of acid to lure views.

They added the man was likely to know the position of the glass containing acid, as he filled it to the rim while he asked Huy Tuan – a juror and witness – to make the other four glasses of water almost full.

Netizens said the glasses’ differences in fullness could be one of the indicators which helped Phat tell the acid container from the other four.

Thanh Loc and Van Hugo thus wondered why Phat just tried the toxic liquid even though he was fully aware it was acid.