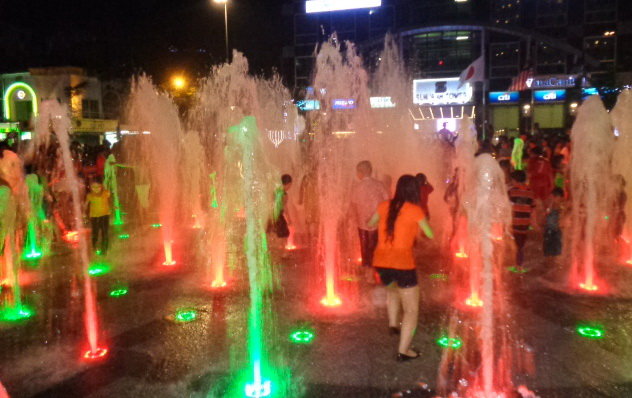 A Tuoi Tre (Youth) newspaper reader has voiced her complaint that a number of local children with accompanying parents and mindless young people have felt overly at home by taking showers at the recently opened pedestrian street’s fountains in downtown Ho Chi Minh City.

Ngoc Tran, a reader, recently wrote to Tuoi Tre to express her frustration over what she has observed at the Nguyen Hue Pedestrian Street, the city’s first of its kind, during the past few days after the street was officially open on Wednesday last week.

The stunning music-fluctuated, color-changing water fountains, which are operated at certain times during the day, have been a major draw to locals and tourists alike.

However, a number of children accompanied by parents and youngsters, who were probably driven by the stuffy, hot weather in recent times, have turned the fountains into their own bathrooms and freely taken showers under the forcefully ejected spurts.

They frolic around and pose for photos in soaked clothes, accidentally splashing water on visitors who are standing nearby to enjoy the music-manipulated water spectacles.

While some may find it fun watching people amusing themselves under the “showers,” several other Tuoi Tre readers consider the act inappropriate and disrespectful to other visitors.

Some expressed concern that the “fun seekers,” particularly young children, may trip on the slippery floor and hurt themselves.

Their dripping clothes and soggy feet will also smear the floor and spoil others’ strolling pleasures.

Some bitterly commented that it would not take long for other “carefree” people to do their laundry under the spurting fountains or bring the water home to use.

Youths and children are seen cheerfully taking a shower and frolic at the spurting fountains at the Nguyen Hue Pedestrian Street in downtown Ho Chi Minh City. Photo: Tuoi Tre

The Nguyen Hue Pedestrian Street in District 1 has been open to the public since Wednesday, just in time for the Reunification and Labor Day holiday that ended on Sunday.

The street will be a venue for parades, meetings, street festivals, and the city’s hallmark Nguyen Hue Flower Street, which has run during Tet (Lunar New Year) for years.

The walking street will also boast art, exhibition and sports activities, and will be lined with mobile stands that offer a wide array of mementoes and food specialties.

To start with, the street will remain open to traffic, except trucks, on its two lateral sections which border the pedestrian part in the heart, according to Nguyen Vinh Ninh, director of the Ho Chi Minh City Urban Traffic Management Zone No. 1 under the municipal Department of Transport.

The project investor said last month that it would take several phases for the street to turn wholly pedestrian-only.