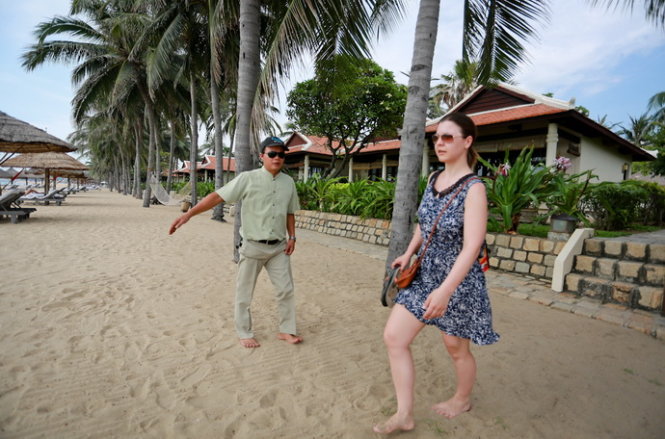 A resort in Nha Trang in central Vietnam is likely to be fined over US$1,000 for forbidding tourists and residents from walking on a nearby beach.

Authorities in Khanh Hoa are considering a VND30 million (US$1,398) fine on Evason Ana Mandara Resort, situated on Tran Phu Street in its capital city of Nha Trang, for prohibiting tourists and city dwellers from strolling on a beach adjacent to the resort. Ngo Khac Thinh, vice head of Nha Trang City’s Urban Management Office, told Tuoi Tre (Youth) newspaper on Wednesday that the act is wholly wrong and intolerable as beaches are public space.

In response to tips-off from tourists, the office’s inspectors, who disguised themselves as tourists, were chased away by Evason Ana Mandara Resort security guards while walking past the beach next to the facility on Monday afternoon.

Thinh added the offence is not unprecedented.

“The resort’s management made a commitment last year to stop such infringements, but has continued to do so until now. So we decided to penalize them this time,” he noted.

Nguyen Dinh Quyen, a local, lamented that he and others are driven away by the resort’s guards every morning when they jog past the beach.

On Wednesday, Pham Duy Hung, a representative of the Member Board of Sovico Khanh Hoa Co., which manages Evason Ana Mandara Resort, told Tuoi Tre that the resort’s warden booths were set up in 1997 to ensure safety for local residents and tourists and facilitate rescue efforts.

They thus sought permission from the city’s Urban Management Office to retain such booths.

Hung added that his resort does not forbid locals and tourists from strolling on the beach.

Regarding the Urban Management Office’s warnings last year, Hung admitted to the violation, which he put down to the company’s shortcomings in personnel training.